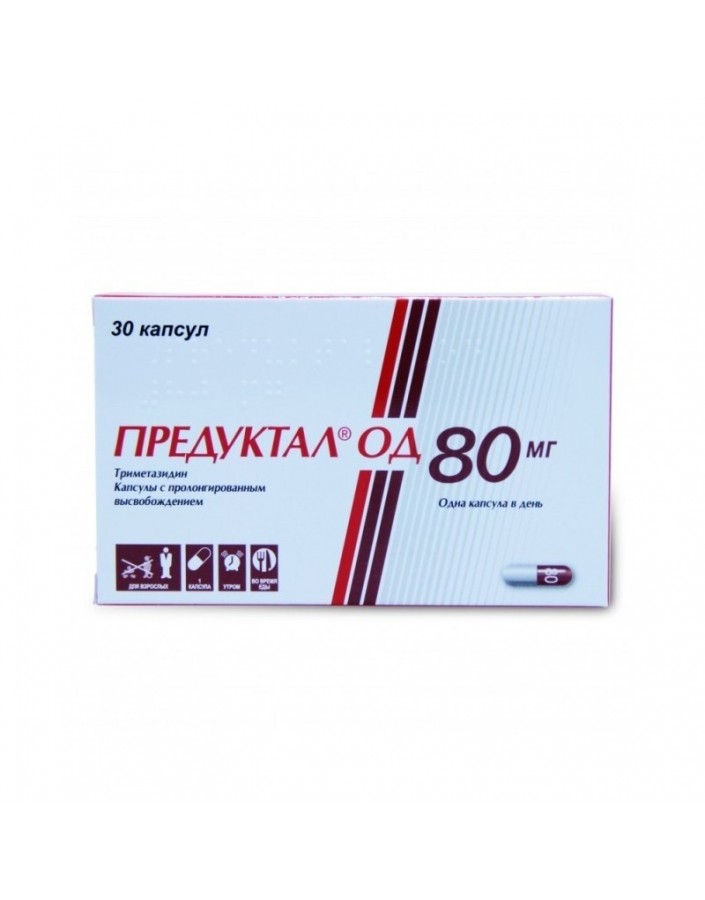 - long-term treatment of coronary artery disease: prevention of attacks of stable angina in the composition of mono-or combination therapy.

The drug is taken orally, 1 capsule 1 time / day, in the morning during breakfast. Capsules should be taken whole, not liquid, squeezed water.

Evaluation of the benefits of treatment can be carried out after 3 months of the drug. If during this time the improvement has not come, the use of the drug Preductal® OD should stop.

Care should be taken when treating patients with severe hepatic insufficiency (see the section "Special Instructions") due to the fact that the available data are limited and do not completely eliminate the absence of the effect of impaired liver function on the metabolism of trimetazidine.

Have patients older than 75 years increased exposure to trimetazidine may be observed due to age-related decline in renal function (see the Pharmacokinetics section).In patients with moderately severe renal failure (CK 30–60 ml / min), a dose reduction is recommended, i.e. 1 pill containing 35 mg of trimetazidine, per day. Selection of the dose in patients older than 75 years should be done with caution (see section "Special instructions").

Safety and efficacy of trimetazidine in patients under the age of 18 not installed. No data available.

Cardiovascular: rarely - palpitations, extrasystoles, tachycardia, marked reduction in blood pressure, orthostatic hypotension, which may be accompanied by general weakness, dizziness or loss of balance, especially with the simultaneous use of antihypertensive drugs, "flushes" of blood to the skin of the face.

- fructose / sucrose intolerance, glucose-galactose malabsorption syndrome, sucrase / isomaltase deficiency and other fermentopathies associated with intolerance to sucrose, which is part of the preparation;

- age up to 18 years (due to the lack of sufficient clinical data);

WITH caution the drug should be prescribed to patients with severe liver failure (10 to 15 points on the Child-Pugh scale), moderate renal failure (CC 30-60 ml / min), patients over 75 years of age (see the sections "Dosage regimen" and " Special instructions").

There are no data on the release of trimetazidine or its metabolites in breast milk. The risk for a newborn / child cannot be excluded. If necessary, the use of the drug Preductal® OD during lactation breastfeeding should be stopped.

Care should be taken when treating patients with severe hepatic insufficiency due to the fact that the available data are limited and do not completely eliminate the absence of the effect of impaired liver function on the metabolism of trimetazidine.

Safety and efficacy of trimetazidine in patients under the age of 18 not installed. No data available.

Preductal® OD is not intended to relieve angina attacks and is not indicated for the initial course of treatment of unstable angina or myocardial infarction in the prehospital or in the first days of hospitalization.

In the event of an attack of angina, treatment should be reviewed and adapted (drug therapy or revascularization). Preductal® OD can cause or worsen parkinsonism symptoms (tremor, akinesia, increased tone), so patients should be regularly monitored, especially in the elderly. In doubtful cases, the patient should be referred to a neurologist for an appropriate examination.

There may be cases of falling associated with instability in the Romberg position and "shaky" gait or a pronounced decrease in blood pressure, especially in patients taking antihypertensive drugs (see the section "Side effect").

Precautionary Preductal should be prescribed.® OD patients who may increase its exposure:

The preparation contains sucrose, so the drug is not recommended for patients with fructose intolerance, glucose-galactose malabsorption syndrome and sucrase-isomaltase deficiency.

During clinical studies, no effect of trimetazidine on hemodynamic parameters was detected, however, during the period of post-registration use, there were cases of dizziness and drowsiness (see the section “Side effect”). These symptoms can affect the ability to drive and perform work that requires an increased rate of physical and mental reactions.

There is only very limited information on trimetazidine overdose.

Treatment: in case of overdose, symptomatic therapy should be carried out.

Not observed. The patient must inform the doctor about all the drugs taken.