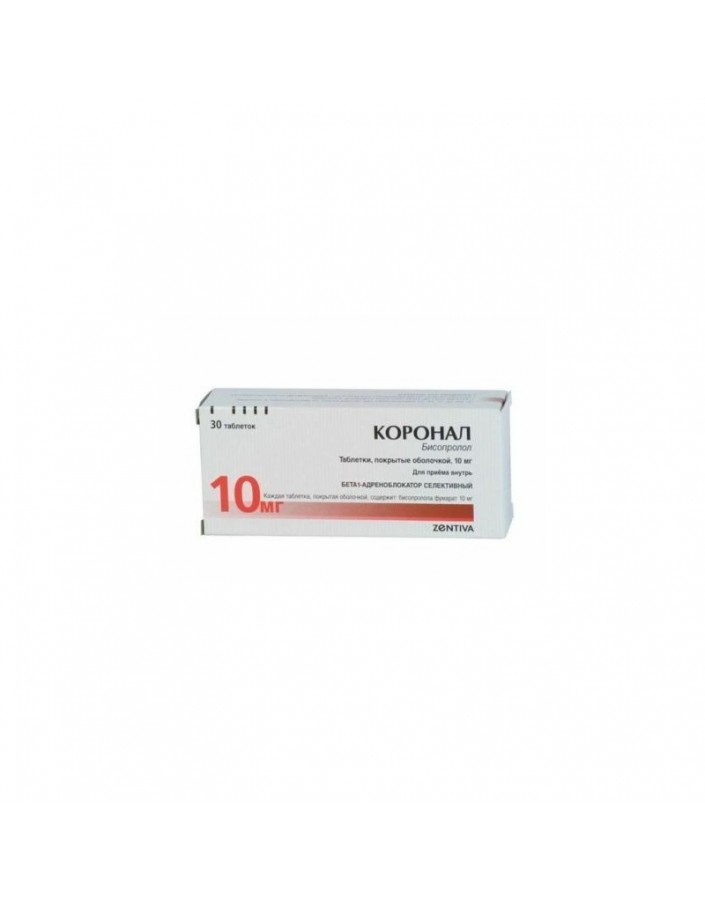 At hypertension and coronary artery disease (prevention of attacks of stable angina) The initial dose is 2.5-5 mg 1 time / day. If necessary, increase the dose to 10 mg 1 time / day. The maximum daily dose is 20 mg.

Tablets should be taken orally, in the morning on an empty stomach, without chewing, with a small amount of liquid.

From the musculoskeletal system: infrequently - muscular weakness, cramps in the calf muscles, arthralgia.

From the side of blood-forming organs: in some cases - thrombocytopenia, agranulocytosis.

- AV blockade of II and III degree (without artificial pacemaker);

In pregnancy, Coronal is prescribed only under strict indications if the intended benefit to the mother outweighs the potential risk to the fetus. 72 h before delivery, taking the drug Coronal must be discontinued due to the possible development of fetal / newborn bradycardia, arterial hypotension, hypoglycemia and respiratory depression.

If taking the drug Coronal is necessary during lactation, breastfeeding should be stopped.

When taking Bisoprolol during pregnancy, the fetus may have intrauterine growth retardation, hypoglycemia, bradycardia.

Have patients with severe liver dysfunction the maximum daily dose is 10 mg.

Have patients with impaired renal function with CC less than 20 ml / min the maximum daily dose is 10 mg.

The drug is contraindicated for use in children and adolescents under 18 years of age (efficacy and safety have not been established).

When prescribing Coronal, one should regularly monitor heart rate and blood pressure (at the beginning of treatment - daily, then - once every 3-4 months), conduct an ECG, determine the level of glucose in the blood of patients with diabetes mellitus (1 time in 4-5 months). In elderly patients, it is recommended to monitor renal function (1 time in 4-5 months).

The patient should be trained in the method of calculating heart rate and instructed on the need for medical consultation with a heart rate of less than 50 bpm.

Before treatment, it is recommended to conduct a study of the function of external respiration in patients with a burdened bronchopulmonary anamnesis.

It should be borne in mind that in approximately 20% of patients with stenocardia, beta-adrenergic blockers are ineffective due to severe coronary atherosclerosis with a low ischemic threshold (HR less than 100 beats / min) and an increased end-diastolic volume of the left ventricle that violates the subendocardial blood flow.

In smoking patients, the effectiveness of beta-blockers decreases.

When using Coronal, patients with pheochromocytoma are at risk of developing paradoxical arterial hypertension (unless effective alpha adrenoblockade is previously achieved).

Bisoprolol may mask certain clinical signs of thyrotoxicosis (for example, tachycardia). Abrupt cancellation of Coronal in patients with thyrotoxicosis is contraindicated because it can enhance the symptoms of the disease.

In case of diabetes mellitus, bisoprolol may mask tachycardia caused by hypoglycemia. Unlike non-selective beta-adrenergic blockers, insulin-induced hypoglycemia practically does not increase and does not delay the restoration of glucose concentration in the blood to normal levels.

With simultaneous use with clonidine, the latter can be discontinued only a few days after discontinuation of the drug Coronal.

Drugs that reduce the supply of catecholamines (including reserpine) can enhance the action of beta-blockers, so patients taking such combinations of drugs should be constantly monitored by a doctor to detect marked reduction in blood pressure or bradycardia.

Patients with concomitant bronchospastic diseases can be prescribed cardioselective blockers in case of intolerance and / or ineffectiveness of other antihypertensive drugs. Overdose is dangerous for the development of bronchospasm.

In the case of elderly patients with increasing bradycardia (less than 50 beats / min), a pronounced decrease in blood pressure (systolic blood pressure below 100 mm Hg), AV blockade, it is necessary to reduce the dose or discontinue treatment.

It is necessary to discontinue the drug before conducting a study of the content in the blood and urine of catecholamines, normetanephrine, vanillimindal acid, and titers of antinuclear antibodies.

You can not abruptly interrupt treatment because of the danger of severe arrhythmias and myocardial infarction. Cancellation is carried out gradually, reducing the dose for 2 weeks or more (the dose is reduced by 25% in 3-4 days).

Use of the drug Coronal in children and adolescents under the age of 18 contraindicated, because efficacy and safety not established.

Treatment: it is necessary to wash the stomach and prescribe adsorbing drugs. Symptomatic therapy is carried out: with advanced AV-blockade - in / in the introduction of 1-2 mg of atropine, epinephrine or staging of a temporary pacemaker; with ventricular extrasystole - in / in Lidocaine (I class A drugs do not apply); with a decrease in blood pressure, the patient should be in the Trendelenburg position; in the absence of symptoms of pulmonary edema - in / in plasma-substituting solutions, with the ineffectiveness - the introduction of epinephrine, dopamine,dobutamine (to maintain chrono-and inotropic action and eliminate the pronounced decrease in blood pressure); in heart failure - cardiac glycosides, diuretics, glucagon; with convulsions - in / in diazepam; with bronchospasm - beta2-adrenostimulators inhalation.

With simultaneous use with Coronal, iodine-containing radiopaque drugs for intravenous administration increase the risk of Anaphylactic reactions .

With simultaneous use with Coronal phenytoin for IV injection, drugs for general inhalation anesthesia (derivatives of hydrocarbons) increase the severity of cardiodepressant action and the likelihood of a decrease in blood pressure.

With simultaneous use of Coronal changes the effectiveness of insulin and oral hypoglycemic drugs, masks the symptoms of developing hypoglycemia (tachycardia, increased blood pressure).

With simultaneous use of Coronal reduces the clearance of lidocaine and xanthines (except for difillin) and increases their concentration in plasma, especially in patients with initially increased clearance of theophylline under the influence of smoking.

With simultaneous use with Coronal Nifedipine can lead to a significant decrease in blood pressure.

When used simultaneously with Coronal diuretics, clonidine, sympatholytic, hydralazine and other antihypertensive drugs can lead to an excessive decrease in blood pressure.

Coronal lengthens the action of non-depolarizing muscle relaxants and the anticoagulant effect of coumarins.

The simultaneous use of Coronal with MAO inhibitors due to a significant increase in the hypotensive effect is not recommended; the treatment gap between taking MAO and Coronal inhibitors should be at least 14 days.

With simultaneous use with Coronal Sulfasalazine increases the concentration of bisoprolol in the plasma.

When applied simultaneously with the Coronal rifampicin shortens T1/2 bisoprolol.

There is a potential danger of an additive effect with the development of hypotension and / or significant bradycardia, when used together with beta-blockers for topical use (eye drops).

There is a decrease in the antihypertensive effect of the drug against the use of adrenaline and noradrenaline.

The likelihood of violations of automatism, conduction and contractility of the heart increases (mutually) during therapy with quinidine drugs (mefloquine, chloroquine).

In case of shock or arterial hypotension caused by floctafenin, when used together, it is possible to reduce compensatory cardiovascular reactions.

With simultaneous use with Baclofen or amifostine, there is also an increased antihypertensive effect.