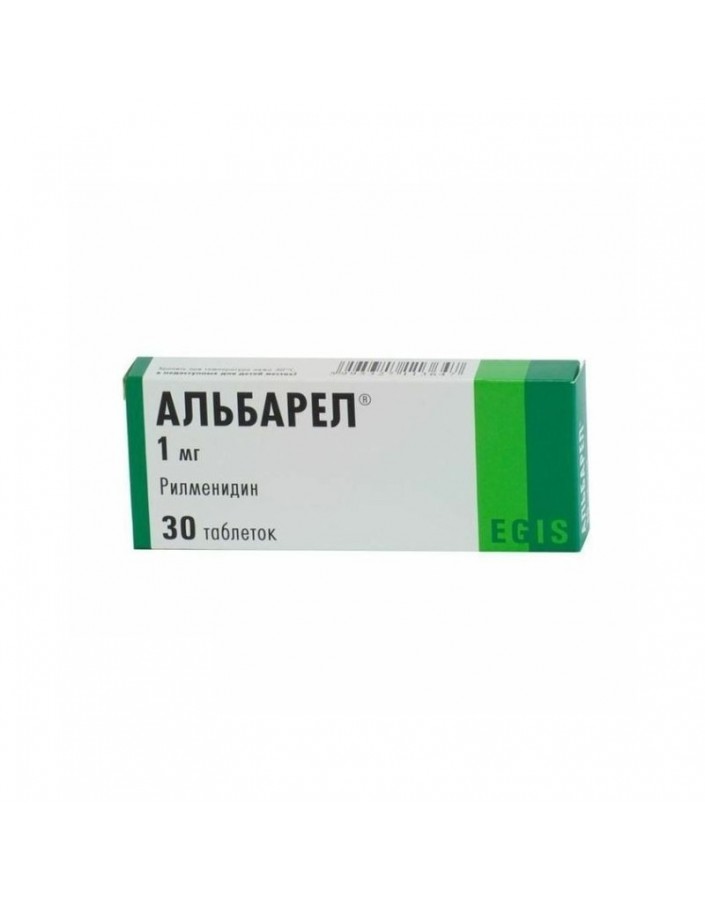 An antihypertensive drug, an oxazoline derivative. Selectively interacts with the imidazoline receptor (I1) cortical and peripheral vasomotor centers, in particular the renal centers. The binding of rilmenidine with imidazoline receptors inhibits the sympathomimetic activity of both cortical and peripheral centers, which leads to a decrease in blood pressure.

Albarel® has a dose-dependent hypotensive effect on systolic and diastolic blood pressure in the supine and standing position. It is shown that the appointment of the drug Albarel® in therapeutic doses (1 or 2 mg / day) is effective in the treatment of mild and moderate arterial hypertension. The effect of the drug lasts for 24 hours, effective during physical exertion. With prolonged use, addiction does not develop.

In therapeutic doses Albarel® does not cause a delay of electrolytes and water, does not disturb the metabolic equilibrium.

After taking the drug inside rilmenidine is rapidly absorbed. After a single dose of rilmenidine in a dose of 1 mg Cmax in plasma it is reached in 1.5-2 hours and amounts to 3.5 ng / ml. Absolute bioavailability is 100%; not affected by the “first pass” effect through the liver. Simultaneous use of the drug with food does not affect its bioavailability.

Css achieved after 3 days of regular use of the drug. In hypertensive patients receiving albarel® for 2 years, the plasma concentration of the drug remains stable.

Metabolites are found in trace amounts in the urine and are the result of hydrolysis or oxidation of the oxazoline ring. These metabolites are not α agonists.2-adrenoreceptors.

65% of the dose taken is excreted unchanged in the urine. Renal clearance is 2/3 of total clearance.

T1/2 is 8 hours and does not change when changing the dose or repeated use of the drug.

The drug is taken orally, at the beginning of the meal.

The recommended dose is 1 tab. / Day in the morning.

In the absence of a therapeutic effect, the dose of the drug can be increased to 2 tab./day (1 pill in the morning and 1 pill in the evening during the meal). The maximum daily dose is 2 mg.

Have patients with renal insufficiency with CC more than 15 ml / min no dose adjustment required.

Cardiovascular: often - a feeling of palpitations, cold extremities; infrequently - flushing of the skin of the face, orthostatic hypotension.

From the genital and breast organs: often - sexual dysfunction.

- age up to 18 years (safety and efficacy not established);

- Hypersensitivity to rilmenidine and auxiliary components of the drug.

WITH caution the drug should be used simultaneously with ethanol, beta-blockers used in the treatment of heart failure (bisoprolol, Metoprolol, carvedilol); after a recent stroke or myocardial infarction.

Due to the lack of sufficient clinical data, the use of the drug Albarel® contraindicated during pregnancy, although experimental studies no teratogenic and embryotoxic effects were observed in animals.

Studies of the reproductive function of rats did not reveal the effect of rilmenidine on fertility.

In patients with renal insufficiency with CC more than 15 ml / min, no dose adjustment is required.

Clinical data on the safety and efficacy of the drug in children under the age of 18 not enough, so the drug should not be prescribed to this category of patients.

Albarel® can be prescribed for indications in elderly patients.

Do not suddenly stop taking the drug. The dose of the drug should be reduced gradually.

As with the use of other antihypertensive drugs, the appointment of the drug Albarel® patients after a recent stroke or myocardial infarction require regular medical monitoring.

Simultaneous use of the drug Albarel® with beta-blockers used for the treatment of heart failure (bisoprolol, metoprolol, carvedilol) is not recommended.

Simultaneous use of the drug Albarel® with MAO inhibitors is not recommended.

Alcohol is not recommended during the course of treatment.

The drug contains lactose, so it should not be prescribed to patients with rare hereditary diseases such as galactose intolerance, hereditary lactase deficiency, or glucose-galactose malabsorption syndrome.

Treatment: sympathomimetic therapy; gastric lavage; with a pronounced decrease in blood pressure - the use of sympathomimetics. Hemodialysis is ineffective.

The simultaneous use of the drug Albarel is contraindicated® with sultoprid due to the increased risk of ventricular arrhythmias, in particular pirouette-type arrhythmias.

Not recommended for simultaneous use with:

- ethanol, because Alcohol increases the sedative effect of the drug, as a result of which the concentration of attention is disturbed, so driving a car or working with machinery can be dangerous. The use of alcoholic beverages and medication containing ethanol should be avoided;

- with beta-blockers used in heart failure (bisoprolol, Carvedilol, metoprolol), because lowering the tone of the central division of the sympathetic nervous system and the vasodilating effect of antihypertensive drugs can be dangerous for patients with heart failure taking beta-blockers and vasodilators;

- with MAO inhibitors, sincereduction of the hypotensive effect of rilmenidine is possible.

Caution should be exercised while using the drug Albarel® with:

- drugs that cause arrhythmia of the "pirouette" type (with the exception of sultopride), since the risk of ventricular arrhythmias increases: antiarrhythmic drugs of class IA (quinidine, hydroquinidine, disopyramide) and class III (amiodarone, dofetilide, ibutilide), sotalol. ECG monitoring and medical observation required;

- tricyclic antidepressants, because the hypotensive effect of rilmenidine may be slightly reduced;

You should consider the possible interaction with the simultaneous use of the drug Albarel® with:

- alpha-blockers due to increased hypotensive action and increased risk of orthostatic hypotension;

- Amifostine, because may increase antihypertensive action;

- corticosteroids (with the exception of Hydrocortisone, used as replacement therapy for chronic cortical adrenal insufficiency), tetracosactide (for systemic use), because possible weakening of the antihypertensive effect due to the retention of water / sodium in the body caused by corticosteroids;

- neuroleptics, imipramine and tricyclic antidepressants due to increased antihypertensive effects and the risk of orthostatic hypotension (cumulative effect);

- other means suppressing the action of the central nervous system, such as morphine derivatives (analgesics, antitussive drugs)