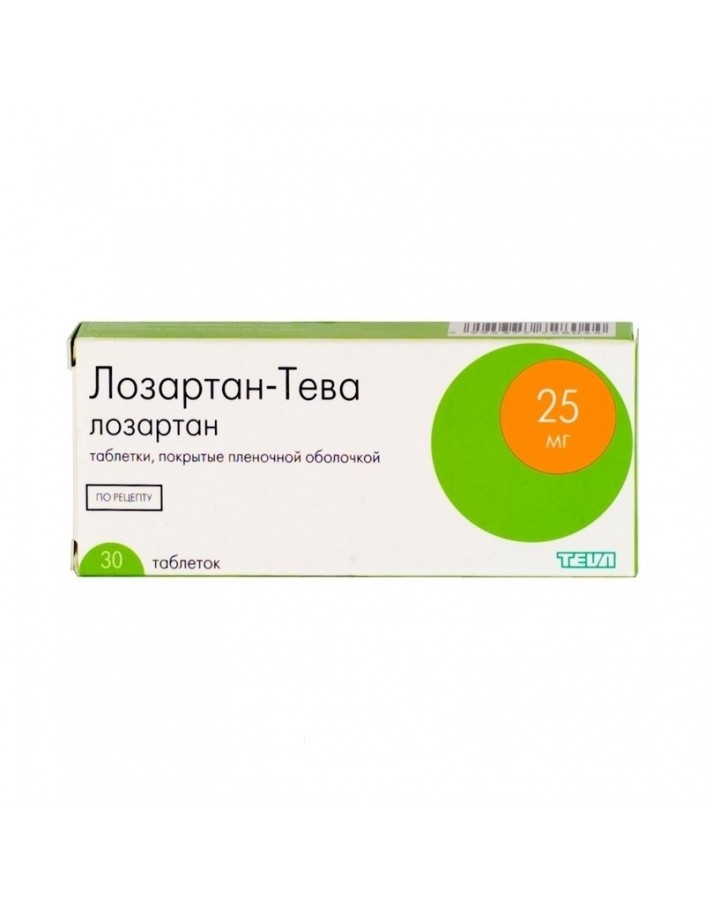 Pharmacodynamics.
Losartan is a specific angiotensin II receptor antagonist (subtype AT1) for oral administration. It does not inhibit kininase II - an enzyme that catalyzes the reaction of converting angiotensin I to angiotensin II.
Angiotensin II binds selectively to AT1 receptors found in many tissues (in vascular smooth muscle tissue, adrenal glands, kidneys, and heart) and performs several important biological functions, including vasoconstriction and the release of aldosterone. Angiotensin II also stimulates the growth of smooth muscle cells. Losartan and its pharmacologically active metabolite (Е 3174), both in vitro and in vivo, block all physiological effects of angiotensin II, regardless of the source or route of synthesis. Losartan binds selectively to AT1 receptors, does not bind and does not block the receptors of other hormones and ion channels, which play an important role in regulating the function of the cardiovascular system. In addition, losartan does not inhibit angiotensin-converting enzyme (ACE) - kininase II, and, accordingly, does not prevent the destruction of bradykinin, so side effects indirectly associated with bradykinin (for example, angioedema) occur quite rarely.
When using losartan, the absence of the influence of negative feedback on renin secretion leads to an increase in plasma renin activity. Increased renin activity leads to an increase in angiotensin II in the blood plasma. However, antihypertensive activity and a decrease in the concentration of aldosterone in blood plasma persist, indicating an effective blockade of angiotensin II receptors. Losartan and its active metabolite have greater affinity for angiotensin I receptors than angiotensin II receptors. The active metabolite is 10-40 times more active than losartan. After a single oral administration, the antihypertensive effect (systolic and diastolic blood pressure decreases) reaches a maximum after 6 hours, then gradually decreases within 24 hours.
The maximum antihypertensive effect develops 3-6 weeks after starting the drug.
In patients with arterial hypertension without concomitant diabetes mellitus with proteinuria (more than 2 g / day), the use of the drug significantly reduces proteinuria, the excretion of albumin and immunoglobulin G.
Stabilizes the concentration of urea in the blood plasma. Does not affect the autonomic reflexes and does not have a long-term effect on the concentration of norepinephrine in the blood plasma.
Losartan at a dose of 150 mg per day does not affect the concentration of triglycerides, total cholesterol and high density lipoprotein cholesterol (HDL) in serum in patients with arterial hypertension.In the same dose, losartan does not affect the fasting blood glucose concentration.

CONTRAINDICATIONS
Hypersensitivity to the drug; severe liver failure (more than 9 points on the Child-Pugh scale); age up to 18 years; simultaneous use with aliskiren or aliskiren-containing drugs in patients with diabetes and / or renal dysfunction; lactose intolerance, lactase deficiency or glucose-galactose malabsorption; pregnancy and breastfeeding period.

Hypotension; reduced circulating blood volume (BCC); violations of water and electrolyte balance; bilateral renal artery stenosis or arterial stenosis of a single kidney; renal failure; liver failure (less than 9 points on the Child-Pugh scale); hyperkalemia; hypertrophic obstructive cardiomyopathy; heart failure with life-threatening arrhythmias; heart failure with concomitant severe renal impairment; coronary heart disease; cerebrovascular diseases; primary hyper aldosteronism; angioedema in history.
Use during pregnancy and during breastfeeding
The use of losartan during pregnancy is contraindicated. It is known that drugs acting directly on the renin-angiotensin-aldosterone system (RAAS), when used in the second and third trimesters of pregnancy, can cause developmental defects or even death of the developing fetus. Therefore, when diagnosing pregnancy, taking losartan should be immediately discontinued. It is not known whether losartan is excreted in breast milk. Do not take losartan during breastfeeding. If taking the drug is necessary during lactation, then breastfeeding should be stopped.

Inside, regardless of the meal, the multiplicity of reception - 1 time per day. The pills are swallowed whole, without chewing, with water.
Arterial hypertension
With arterial hypertension, the standard initial and maintenance dose for most patients is 50 mg 1 time / day. To achieve a greater therapeutic effect, the dose is increased to a maximum daily dose of 100 mg 1 time per day.
Chronic heart failure
The initial dose for patients with chronic heart failure is 12.5 mg 1 time per day. Typically, the dose increases with a weekly interval (that is, 12.5 mg / day, 25 mg / day and 50 mg / day) to an average maintenance dose of 50 mg 1 time per day, depending on the patient's tolerance of the drug.
Reducing the risk of developing cardiovascular diseases (including stroke) and mortality in patients with arterial hypertension and left ventricular hypertrophy
The initial dose of the drug is 50 mg 1 time / day. In the future, hydrochlorothiazide may be added in low doses or the dose of Losartan may be increased to 100 mg in one or two doses, taking into account a decrease in blood pressure.
Kidney protection in patients with type 2 diabetes and proteinuria
The drug Losartan is prescribed in the initial dose - 50 mg 1 time per day with a further increase in dose up to 100 mg / day (taking into account the degree of blood pressure reduction) in one or two doses.
Special patient groups:
In patients with reduced BCC (for example, when taking diuretics in high doses), the recommended initial dose of Losartan is 25 mg 1 time / day.
Patients with a renal failure and patients on a dialysis
There is no need to select the initial dose in patients with renal insufficiency, including patients on dialysis.
Elderly patients
There is no need for dose selection in elderly patients, although it is recommended to begin treatment with a dose of 25 mg in patients older than 75 years.
Patients with liver failure
In patients with a history of liver disease, it is recommended to prescribe the drug in lower doses. The use of losartan is contraindicated in patients with severe hepatic insufficiency, since there is no clinical experience with this group of patients (see section "Contraindications").
The safety and efficacy of the drug in children under 18 have not been established.

Symptoms: marked reduction in blood pressure and tachycardia; bradycardia may occur due to parasympathetic stimulation. Treatment: forced diuresis, symptomatic therapy; Losartan and its active metabolite are not removed from the bloodstream by hemodialysis.

INTERACTION WITH OTHER MEDICINES
No clinically significant interaction of losartan with hydrochlorothiazide, Digoxin, Warfarin, cimetidine, phenobarbital, Ketoconazole and Erythromycin was noted. Rifampicin and Fluconazole reportedly decrease the concentration of the active metabolite in the blood plasma. The clinical significance of these interactions is not yet known.
As with the use of other agents that inhibit the formation of angiotensin II or its action, simultaneous use of losartan with potassium-saving diuretics (for example, spironolactone, triamterene, amiloride), potassium preparations, salts containing potassium, increases the risk of hyperkalemia.
Non-steroidal anti-inflammatory drugs (NSAIDs), including selective cyclooxygenase-2 inhibitors (COX-2), can reduce the effect of diuretics and other hypotensive drugs. Therefore, the antihypertensive effect of angiotensin II receptor antagonists (APA II) or ACE inhibitors can be weakened while being used with NSAIDs, including selective COX-2 inhibitors. In some patients with impaired renal function (for example, in elderly patients and in patients with reduced circulating blood volume (BCC),including those taking diuretics) who received NSAID treatment, including selective COX-2 inhibitors, simultaneous use of ARA II or ACE inhibitors, can cause further deterioration of renal function up to the development of acute renal failure. Usually this effect is reversible. Thus, simultaneous therapy with NSAIDs should be carried out with caution in patients with impaired renal function.
The double blockade of RAAS using antagonists of the APA II receptors, ACE inhibitors or aliskiren (renin inhibitor), is associated with an increased risk of developing hypotension, hyperkalemia and renal impairment (including the development of acute renal failure) compared with monotherapy. It is necessary to control blood pressure, kidney function and electrolytes in the blood of patients taking losartan and other drugs that affect the RAAS. Losartan should not be used simultaneously with aliskiren in patients with diabetes. Simultaneous use of losartan and aliskiren should be avoided in patients with impaired renal function (glomerular filtration rate of less than 60 ml / min).
With the simultaneous use of APA II and lithium may increase the concentration of lithium in the blood plasma. Given this, it is necessary to weigh the benefits and risks of losartan co-use with lithium preparations. If necessary, the simultaneous use of drugs, you need to regularly monitor the concentration of lithium in the blood plasma.Fluconazole, an inhibitor of the cytochrome P450 2C9 isoenzyme, decreases plasma concentrations of the active metabolite and increases losartan concentrations, however, the pharmacodynamic significance of this phenomenon has not been established. It has been shown that patients who do not metabolize losartan to the active metabolite have a very rare and specific defect of the P450 2C9 isoenzyme.

In patients with reduced BCC (for example, receiving treatment with high doses of diuretics), symptomatic arterial hypotension may occur at the start of treatment with losartan (it is necessary to correct BCC before prescribing losartan or start treatment with a lower dose).
Violation of water and electrolyte balance is characteristic of patients with impaired renal function with diabetes mellitus or without diabetes mellitus, therefore, it is necessary to closely monitor these patients.
During therapy with losartan, patients should not take potassium or potassium supplements without prior consultation with the doctor. In patients with cirrhosis of the liver, the concentration of losartan in the blood plasma increases significantly, and therefore, in the presence of liver diseases in history, it should be prescribed in lower doses.
During the period of treatment should regularly monitor the content of potassium in the blood, especially in elderly patients, in violation of renal function.
Drugs that affect the RAAS,may increase the concentration of blood urea and serum creatinine in patients with bilateral renal artery stenosis or arterial stenosis of a single kidney.
Safety and efficacy of the drug in children under 18 years have not been established.
Influence on ability to drive vehicles and work with equipment
No special clinical studies have been conducted to evaluate the effect of the drug on the ability to drive and work with equipment. It should be borne in mind the possibility of drowsiness and dizziness, so care must be taken when performing work that requires increased attention, especially at the beginning of treatment, when increasing the dose of the drug and when driving.

In the dark place at a temperature of no higher than 25 ° C.
Keep out of the reach of children.