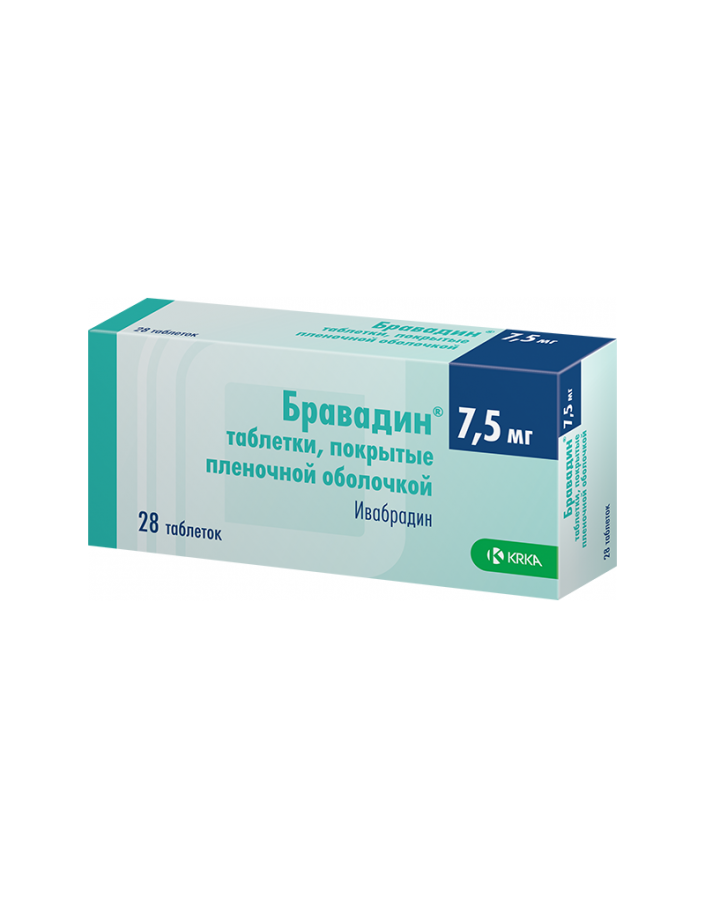 Tablets 5 mg. Oval, biconvex tablets, film coated pale orange, with a risk on one side.

A study was conducted to assess the possible impact of Ivabradine on the ability to drive a car with the participation of healthy volunteers, as a result of which the ability to drive a car did not change. However, in the post-marketing period, there were reported cases of deterioration in the ability to drive vehicles due to symptoms associated with visual impairment.
Drug bravadin® may cause a temporary change in light perception (mainly in the form of a photopsia), which should be taken into account when driving vehicles or other mechanisms with a sharp change in the intensity of light, especially at night.

Side effects
The use of ivabradine has been studied in clinical studies involving almost
14,000 patients. The most common side effects were dose-dependent in nature and were associated with the mechanism of action of ivabradine.
Classification of the incidence of side effects of the World Health Organization (WHO):
very often ≥ 1/10
often from ≥ 1/100 to <1/10
infrequently from ≥ 1/1000 to <1/100
rarely from ≥ 1/10000 to <1/1000
very rarely from <1/10000
frequency unknown cannot be estimated based on available data.
In each group, undesirable effects are presented in order of decreasing severity.
Violations by the organ of vision:
very often: a change in light perception (photopsy) *;
often: blurred vision.
Disturbances from an organ of hearing and labyrinth disturbances:
infrequently: vertigo.
Violations of the heart and blood vessels:
often: uncontrolled blood pressure, bradycardia **, AV block I degree (prolonged PQ interval on the electrocardiogram (ECG)), ventricular premature beats;
infrequently: palpitations, supraventricular extrasystole, marked reduction in blood pressure, possibly associated with bradycardia;
very rarely: atrial fibrillation, AV block II and III degree, sick sinus syndrome.
Nervous system disorders:
often: headache (especially in the first month of therapy), dizziness, possibly associated with bradycardia;
frequency unknown: syncope, possibly associated with bradycardia.
Disorders of the respiratory system, organs of the chest and mediastinum:
infrequently: shortness of breath.
Violations of the skin and subcutaneous tissues:
infrequently: angioedema, skin rash;
rarely: pruritus, erythema, urticaria.
Violations of the gastrointestinal tract:
infrequently: nausea, constipation, diarrhea.
Disorders of the musculoskeletal and connective tissue:
infrequently: muscle cramps.
General disorders and disorders at the site of administration:
infrequently: asthenia, fatigue, possibly associated with bradycardia;
seldom: malaise, possibly associated with bradycardia.
Laboratory and instrumental data:
infrequently: hyperuricemia, eosinophilia, increased plasma creatinine concentration, prolongation of the QT interval on the ECG.
* A change in light perception (photopsia) was noted in 14.5% of patients and was described as a transient change in brightness in a limited area of ​​the visual field. As a rule, such phenomena were provoked by a sharp change in the intensity of illumination in the zone of the visual field. In general, photopsia appeared in the first two months of therapy, followed by repetition. The severity of photopsia, as a rule, was mild or moderate. Photopsia was stopped with continued therapy (77.5% of cases) or after its completion. In less than 1% of patients, the appearance of photopsia was the reason for refusing therapy.
** Bradycardia was observed in 3.3% of patients, especially in the first 2-3 months of therapy, 0.5% of patients developed severe bradycardia with a heart rate less than or equal to 40 beats / min.

Pharmacological properties
Pharmacodynamics
Ivabradine is a drug that slows the rhythm of the heart, the mechanism of action of which lies in the selective and specific inhibition of the If channels of the sinus node, which controls spontaneous diastolic depolarization of the sinus node and regulates the heart rate (HR). Ivabradine has a selective effect on the sinus node, without affecting the duration of the impulses along the atrial, atrioventricular and intraventricular pathways, as well as myocardial contractility and ventricular repolarization.
Ivabradine can also interact with the Ih retinal channels, similar to If channels of the heart, which are involved in the occurrence of a temporary change in the visual perception system due to a change in the response of the retina to bright light stimuli. In provoking conditions (a sharp change in the brightness of the illumination), partial inhibition of the Ivabradine Ih channel occurs, which causes a transient change in brightness in a limited area of ​​the visual field (photopsia).
The main pharmacodynamic property of ivabradine is dose-dependent decrease in heart rate. Analysis of the dependence of the HR reduction on the dose of ivabradine was carried out with a gradual increase in dose to 20 mg twice a day and revealed a tendency to achieve a “plateau” effect when the therapeutic effect does not increase with a further increase in dose, which reduces the risk of developing severe bradycardia (HR 40 beats / min).
At recommended doses, the decrease in heart rate is about 10-15 beats / min at rest and during exercise. This leads to a decrease in the load on the myocardium due to a decrease in the oxygen demand of the myocardium. Ivabradine does not affect intracardiac conduction, myocardial contractility (no negative inotropic action) or ventricular repolarization:
- In electrophysiological studies, Ivabradine did not affect the time of the impulses along the atrioventricular or intraventricular pathways, as well as the corrected QT interval;
- in patients with left ventricular dysfunction (left ventricular ejection fraction (LVEF) from 30 to 45%), ivabradine did not adversely affect LVEF.

Ivabradine is an S-enantiomer that does not demonstrate biological transformation in in vivo studies. N-desmethylated derivative of ivabradine is the main active metabolite.
Absorption and bioavailability
Ivabradine is rapidly and almost completely absorbed in the gastrointestinal tract after ingestion on an empty stomach, reaching the maximum concentration (Cmax) in the blood plasma after approximately 1 hour. Absolute bioavailability is about 40% and is due to the effect of "primary passage" through the liver.
Eating increases the time of absorption of ivabradine by approximately 1 hour and increases plasma concentration from 20 to 30%. It is recommended to take the pills during the meal in order to reduce the concentration variability.
Distribution
Ivabradine binds to plasma proteins at about 70%, the volume of distribution in patients in equilibrium is about 100 liters. Cmax of ivabradine in the blood plasma after prolonged oral administration of a dose of 5 mg twice a day is 22 ng / ml (coefficient of variation (CV) = 29%). The average equilibrium concentration in plasma is 10 ng / ml (KV = 38%).
Metabolism
Ivabradine is extensively metabolized in the liver and intestines by oxidation with cytochrome P450 3A4 (CYP3A4 isoenzyme). The main active metabolite is the N-desmethylated derivative (S 18982) with a concentration of about 40% relative to the concentration of the starting material. The metabolism of this active metabolite also occurs with the participation of the CYP3A4 isoenzyme. Ivabradine has a low degree of affinity for the CYP3A4 isoenzyme, does not demonstrate clinically significant induction or inhibition of the CYP3A4 isoenzyme, so a change in the metabolism or concentration of the plasma isoenzyme CYP3A4 under the action of ivabradine is unlikely. On the contrary, strong inhibitors and inductors of cytochrome P450 can significantly affect the concentration of ivabradine in the blood plasma.
Removal
The half-life (T½) of ivabradine is, on average, 2 hours (70-75% relative to the area under the concentration / time curve (AUC) in blood plasma), the effective T½ is 11 hours. Total clearance is about 400 ml / min, renal clearance is about 70 ml / min. Excretion of metabolites occurs to the same extent through the intestines and the kidneys. About 4% of the ingested dose is excreted unchanged by the kidneys.
Linearity / nonlinearity
Ivabradine pharmacokinetics is linear in the dose range of 0.5-24 mg.
Special patient groups
Elderly and senile patients
Pharmacokinetic parameters (AUC and Сmax) do not significantly differ in patients 65 years and older, 75 years and older, and the general population of patients.
Renal dysfunction
Ivabradine kinetics changes in patients with renal insufficiency (creatinine clearance (KK) 15-60 ml / min) is minimal, since only about 20% of ivabradine and its active metabolite S 18982 are excreted by the kidneys.
Liver dysfunction
In patients with mild hepatic impairment (up to 7 points on the Child-Pugh scale), AUC of ivabradine and its metabolite is 20% more than in patients with normal liver function. Data on the use of ivabradine in patients with moderate hepatic insufficiency (7–9 points on the Child-Pugh scale) is limited and does not allow to conclude about the features of the pharmacokinetics of Ivabradine in this group of patients, and in patients with severe liver failure (more than 9 points on the Child -Pu) absent.
The relationship between pharmacokinetic and pharmacodynamic properties
The decrease in heart rate is directly proportional to the increase in plasma concentrations of ivabradine and the active metabolite S 18982 when taken in doses
15–20 mg twice daily. At higher doses of the drug, the decrease in heart rate is not proportional to the concentration of ivabradine in the blood plasma and is characterized by a tendency to achieve a “plateau” effect.High plasma concentrations of Ivabradine, which can be achieved with simultaneous use of Ivabradine with strong inhibitors of the CYP3A4 isoenzyme, can lead to a pronounced decrease in heart rate, but this risk is reduced, while simultaneous use with moderate inhibitors of the CYP3A4 isoenzyme.