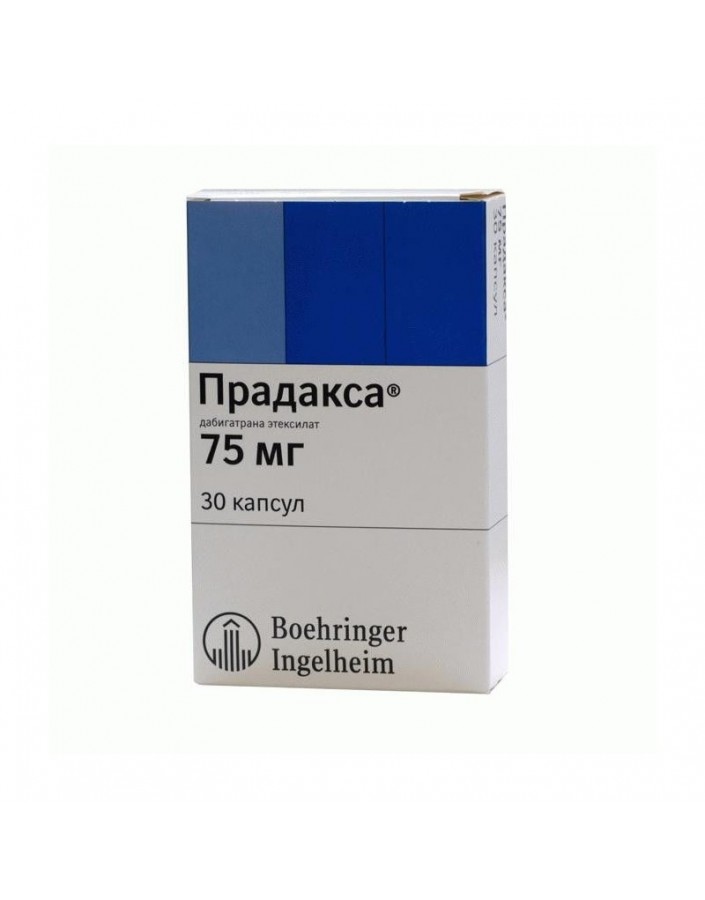 - prevention of venous thromboembolism in patients after orthopedic operations.

- renal failure severe (CC less than 30 ml / min);
- hemorrhagic disorders, hemorrhagic diathesis, spontaneous or pharmacologically induced impairment of hemostasis;
- active clinically significant bleeding;
- abnormal liver function and liver diseases that may affect survival;
- simultaneous administration of quinidine;
- damage to the organs as a result of clinically significant bleeding, including hemorrhagic stroke during the previous 6 months before the start of therapy;
- age less than 18 years;
- known hypersensitivity to dabigatran or dabigatran etexilate or to one of the excipients.

In controlled studies, some patients received the drug at 150-220 mg /, part - less than 150 mg /, part - more than 220 mg /
Possible bleeding of any localization. Extensive bleeding is rare. The development of undesirable reactions was similar to the reactions in the case of the use of enoxaparin sodium.
From the hematopoietic system: anemia, thrombocytopenia.
From the blood coagulation system: hematoma, bleeding of wounds, nose bleeding, Gastrointestinal bleeding, rectal bleeding, hemorrhoidal bleeding, skin hemorrhagic syndrome, hemarthrosis, hematuria.
From the digestive system: dysfunction of the liver, increased activity of hepatic transaminases, hyperbilirubinemia.
From the laboratory indicators: reduction of hemoglobin and hematocrit
Local reactions: bleeding from the injection site, bleeding from the injection site of the catheter.
Complications associated with the procedures and surgical interventions: bloody wound discharge, hematoma after procedures, bleeding after procedures, postoperative anemia, post-traumatic hematoma, bloody discharge after procedures, bleeding from the incision site, drainage after the procedure, drainage of the wound.
The frequency of the observed undesirable reactions when taking dabigatran etexilate did not go beyond the range of the frequency of undesirable reactions developing when using enoxiparin sodium.

Pradaxa is prescribed inside.
Adults for the prevention of venous thromboembolism (BT) in patients after orthopedic surgery recommended dose is 220 mg / day. one time (2 capsules. 110 mg each).