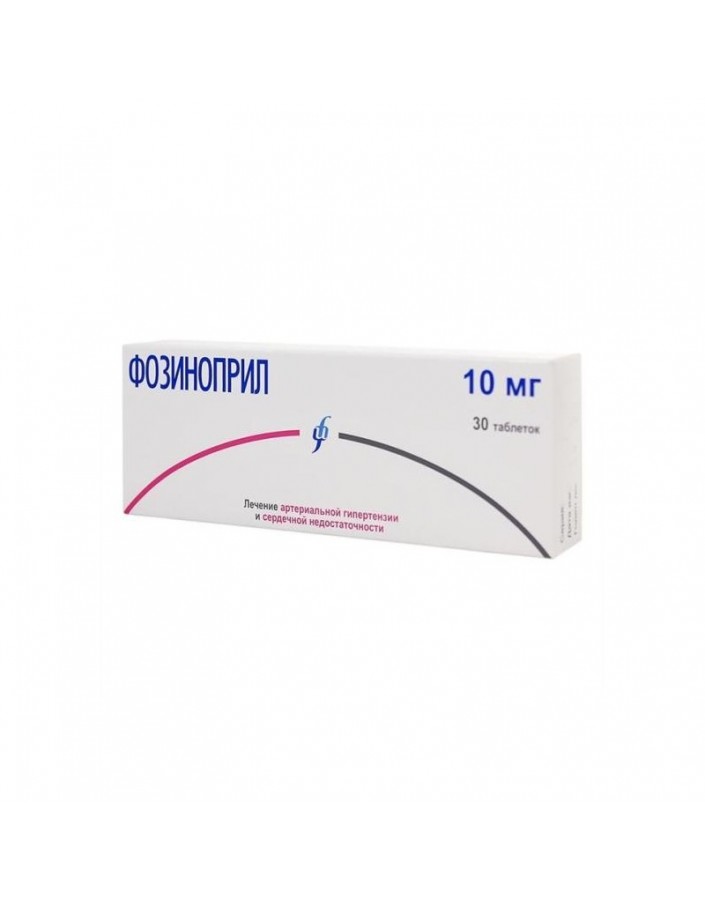 Farmgroup: ACE inhibitor.
Pharmacological action: ACE inhibitor, has hypotensive, vasodilating, diuretic and potassium-sparing effect. Reduces the formation of angiotensin II from angiotensin I, which leads to a decrease in round neck and systemic blood pressure.
Suppresses the synthesis of aldosterone, inhibits tissue ACE.
The hypotensive effect is also due to the suppression of the metabolism of bradykinin, which has a pronounced vasodilating effect. Reduction of blood pressure is not accompanied by a change in the bcc, cerebral and renal blood flow, blood supply to the internal organs, skeletal muscles, skin, and myocardial reflex activity.
In hypertension and LV hypertrophy, treatment leads to a decrease in its mass and wall thickness. Long-term treatment does not lead to metabolic disorders.
After ingestion, the hypotensive effect develops within 1 hour, reaches a maximum after 3-6 hours and lasts for 24 hours.
Pharmacokinetics: Absorption - 36% (regardless of the meal). In the mucous membrane of the gastrointestinal tract and the liver is hydrolyzed to form fosinoprilat. TCmax - 3 h, T1 / 2 - 11.5 h.
Communication with plasma proteins is 95%, has a relatively small volume of distribution and is slightly absorbed by cellular components.
Does not penetrate the BBB. Excreted in the bile, urine.

Enhances the hypoglycemic effect of sulfonylurea derivatives, insulin, the risk of developing leukopenia with simultaneous use with Allopurinol, cytostatic drugs, immunosuppressants, procainamide.
When taken simultaneously with drugs Li + marked increase in its concentration in the blood.
Antihypertensives, diuretics, narcotic analgesics, drugs for general anesthesia enhance the hypotensive effect. NSAIDs, salt weaken the effect.
Preparations K +, potassium-sparing diuretics (amiloride, spironolactone,triamteren) increase the risk of hyperkalemia.
NSAIDs, including selective COX-2 inhibitors and estrogens (retain fluid) can reduce the severity of the hypotensive effect.
With the simultaneous use of ACE inhibitors and gold preparations (sodium aurothiomalate), a symptom complex is described, including facial flushing, nausea, vomiting, and a decrease in blood pressure.
Insulin and oral hypoglycemic drugs - the risk of hypokalemia.

Inside, at 10 mg / day, 1 time per day; if necessary, the dose can be increased to 40 mg. The dose should be selected in accordance with the dynamics of blood pressure.

Symptoms: decreased blood pressure, bradycardia, shock, water-electrolyte imbalance, acute renal failure, stupor.
Treatment: the patient is placed in the "lying" position with raised legs.
In mild cases of overdose - gastric lavage, the introduction of adsorbents and sodium sulfate within 30 minutes after ingestion.
With a decrease in blood pressure - in / in the introduction of catecholamines, angiotensin II; in bradycardia - the use of pacemaker.
Not displayed during hemodialysis.

Patients with malignant arterial hypertension or concomitant decompensated CHF should begin treatment in a hospital.
Before initiating therapy with ACE inhibitors and in the process of treatment, the total number of leukocytes is counted and the leukocyte formula is determined (1 time per month for the first 3-6 months of treatment and with periodic intervals of up to 1 year in patients with an increased risk of neutropenia: connective tissue diseases in high doses), as well as at the first signs of infection.
Before and during treatment, control of blood pressure, kidney function, plasma K + concentration, Hb and creatinine, urea, electrolyte concentration and activity of “liver” enzymes in the blood is necessary.
Based on the results of epidemiological studies, it is assumed that the simultaneous use of ACE inhibitors and insulin, as well as oral hypoglycemic drugs may lead to the development of hypoglycemia. The greatest risk of development is observed during the first weeks of combination therapy, as well as in patients with impaired renal function. Patients with diabetes mellitus require careful control of glycemia, especially during the first month of therapy with an ACE inhibitor.
Care must be taken when prescribing to patients on a low-salt or salt-free diet (increased risk of developing hypotension).
Safety and efficacy in pediatric practice: newborns who have been exposed to intrauterine effects of ACE inhibitors are recommended to be closely monitored to detect hypotension, oliguria and hyperkalemia.
In newborns and infants there is a risk of oliguria and neurological disorders, possibly due to a decrease in renal and cerebral blood flow due to a decrease in blood pressure caused by ACE inhibitors; lower initial doses and careful observation are recommended.
Care must be taken when driving or doing other things.work requiring increased attention, because dizziness is possible, especially after the initial dose of an ACE inhibitor in patients taking diuretic drugs.
Caution should be exercised when performing physical exercises or in hot weather due to the risk of dehydration and a decrease in blood pressure due to a decrease in fluid volume.
Before surgery (including dentistry), it is necessary to warn the surgeon / anesthesiologist about the use of ACE inhibitors.
When using ACE inhibitors in the II-III trimesters of pregnancy, oligohydroamnion, hypotension of the fetus and newborn, oliguria and deaths are possible.