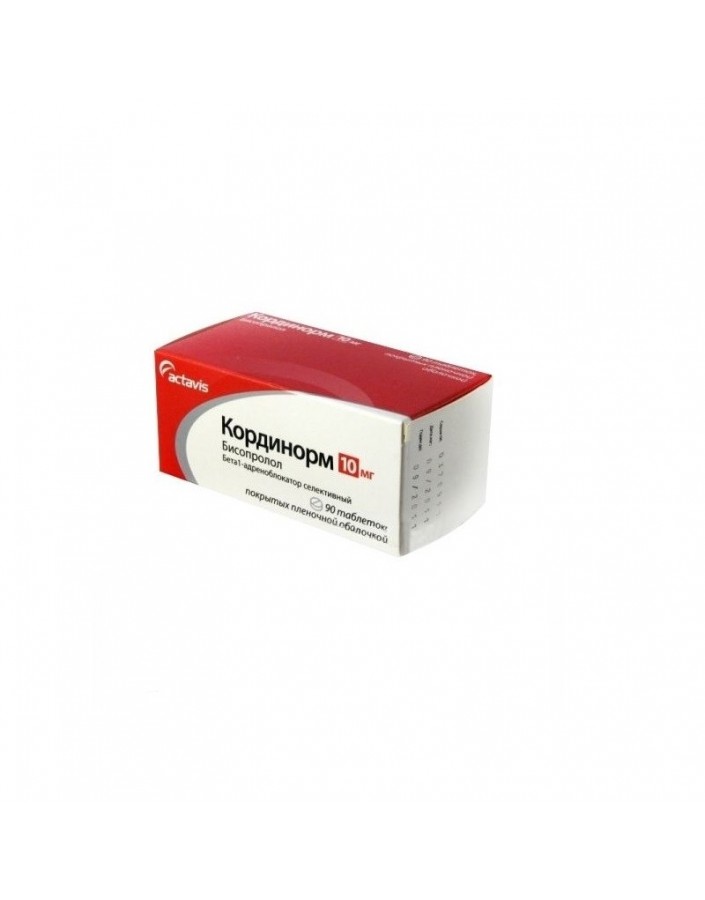 Selective beta1-adrenergic blocker without internal sympathomimetic activity and membrane stabilizing properties. Blocking in low doses of β1-adrenoreceptors of the heart, Bisoprolol reduces the catecholamine-stimulated formation of cAMP from ATP, reduces the intracellular current of Calcium ions. It has a negative chrono-, dromo-, batmo-and inotropic effect, inhibits conductivity and excitability, slows down AV conduction, reduces myocardial need for oxygen. Reduces heart rate at rest and under load. Reduces the activity of plasma renin. It has hypotensive, antiarrhythmic and antianginal effects.

At the beginning of the drug use (in the first 24 hours) as a result of the reciprocal increase in the activity of α-adrenoreceptors and the elimination of stimulation β2-Adrenoreceptors OPSS increases slightly. After 1-3 days OPSS returns to the initial level, and with long-term use it decreases.

The hypotensive effect of bisoprolol is due to a decrease in IOC, sympathetic stimulation of peripheral vessels, a decrease in the activity of the renin-angiotensin system (important for patients with initial renin hypersecretion), restoration of sensitivity in response to a decrease in blood pressure and effect on the central nervous system.In case of arterial hypertension, the effect occurs in 2-5 days, stable action - in 1-2 months.

The antiarrhythmic effect is due to the elimination of arrhythmogenic factors (tachycardia, increased activity of the sympathetic nervous system, increased cAMP, arterial hypertension), as well as a decrease in the rate of spontaneous excitation of sinus and ectopic pacemakers and slowing AV-conduct (mainly in the antegrade and, to a lesser extent, in retrograde directions through the AV node) and along additional paths.

In contrast to non-selective beta-blockers, when administered in moderate therapeutic doses, bisoprolol has a less pronounced effect on organs containing β2-adrenoreceptors (pancreas, skeletal muscles, smooth muscles of peripheral arteries, bronchi and uterus) and carbohydrate metabolism, does not cause sodium retention in the body. The severity of atherogenic action does not differ from that of propranolol.

When used in large doses, it has a blocking effect on both subtypes of β-adrenoreceptors.

After taking the drug inside of the gastrointestinal tract 80-90% of bisoprolol is absorbed.Reception simultaneously with food does not affect absorption. Cmax in blood plasma is achieved in 1-3 hours

Binding to plasma proteins is about 35%. Permeability through the BBB and placental barrier, as well as the degree of penetration into breast milk are low.

50% of the dose taken is metabolized in the liver to form inactive metabolites. 50% - displayed in unchanged form.

Tablets should be taken orally, in the morning, on an empty stomach, without chewing.

Treatment patients with impaired liver function or kidney mild or moderate usually does not require dose adjustment. Have patients with severe renal impairment (CC <20 ml / min) or the liver the maximum daily dose is 10 mg.

Have patients old age dose adjustment is not required.

From the side of the central nervous system: fatigue, weakness, dizziness, headache, drowsiness or insomnia, nightmares, depression, anxiety, confusion or short-term memory loss, hallucinations, asthenia, myasthenia gravis, paresthesia in the extremities (in patients with intermittent claudication and Reino syndrome), tremor.

Respiratory: nasal congestion, difficulty breathing when administered in high doses (due to loss of selectivity) and / or in susceptible patients - laryngo and bronchospasm.

From the reproductive system: decreased libido and decreased potency.

- bronchial asthma and COPD in history;

- simultaneous administration of MAO inhibitors (with the exception of MAO type B);

- children's and teenage age up to 18 years (efficiency and safety of use are not established);

- Hypersensitivity to other beta-blockers;

Use during pregnancy and lactation is possible if the potential benefit to the mother exceeds the risk of side effects in the fetus and child (such as intrauterine growth retardation, hypoglycemia, bradycardia).

The patient should be aware that they should not abruptly interrupt the treatment or change the recommended dose without first consulting a doctor.

Monitoring patients receiving Cordinorm should include monitoring of heart rate and blood pressure (at the beginning of treatment - daily, then once every 3-4 months), ECG, determination of blood glucose in patients with diabetes mellitus (1 time in 4-5 months).In elderly patients, it is recommended to monitor renal function (1 time in 4-5 months).

The patient should be trained in the method of counting heart rate and instructed on the need for medical consultation with a heart rate of less than 50 bpm.

Before starting treatment in patients with a burdened broncho-pulmonary history, it is recommended to conduct a study of the function of external respiration.

In approximately 20% of patients with stenocardia, beta-blockers are ineffective. The main reasons for this are severe coronary atherosclerosis with a low ischemic threshold (HR less than 100 beats / min) and an increased end-diastolic volume of the left ventricle that violates the subendocardial blood flow.

When smoking, the effectiveness of beta-blockers below.

When using Cordinorm in patients with pheochromocytoma, there is a risk of development of paradoxical arterial hypertension (unless effective alpha adrenoblockade is previously achieved).

In diabetes mellitus, the effect of bisoprolol may mask the tachycardia caused by hypoglycemia. Unlike non-selective beta-adrenergic blockers, Cordinorm practically does not increase insulin-induced hypoglycemia and does not delay the recovery of glucose in the blood to normal levels.

With simultaneous treatment with clonidine, its reception can be stopped only a few days after the withdrawal of Cordinorm.

Perhaps the increased severity of hypersensitivity reactions and the lack of effect of the usual doses of epinephrine (adrenaline) on the background of burdened allergological history. If it is necessary to conduct a planned surgical treatment, the drug is discontinued 48 hours before the start of general anesthesia. If the patient took the drug before surgery, he should choose a drug for general anesthesia with a minimally negative inotropic effect.

Drugs that reduce the supply of catecholamines (for example, reserpine) can enhance the action of beta-blockers, so patients taking such combinations of drugs should be under constant medical supervision to detect arterial hypotension or bradycardia.

Cardioselective adrenergic blockers can be prescribed to patients with bronchospastic diseases in case of intolerance and / or ineffectiveness of other antihypertensive drugs, but the dose should be strictly controlled. Overdose is dangerous for the development of bronchospasm. In the case of elderly patients with increasing bradycardia (less than 50 beats / min), arterial hypotension (systolic blood pressure below 100 mm Hg), AV blockade, bronchospasm, ventricular arrhythmias, severe abnormal liver function and kidney, reduce the dose or stop treatment.

It is recommended to stop therapy in the development of depression caused by taking beta-blockers.

You can not abruptly interrupt treatment because of the danger of severe arrhythmias and myocardial infarction. Cancellation is carried out gradually, reducing the dose for 2 weeks or more (reduce the dose by 25% in 3-4 days).

The drug should be discontinued before the examination of the content in the blood and urine of catecholamines, normetanephrine, vanillyl almond acid, and titers of antinuclear antibodies.

Treatment: gastric lavage and prescription absorbent drugs; symptomatic therapy: in case of the developed AV blockade - in / in the introduction of 1-2 mg of atropine, epinephrine (adrenaline) or staging a temporary pacemaker; for ventricular extrasystole - the introduction of Lidocaine (class IA drugs are not used); with a decrease in blood pressure - the patient should be in the Trendelenburg position; if there are no signs of pulmonary edema, then plasma-substituting solutions should be injected / in, with the ineffectiveness - administration of epinephrine (adrenaline), dopamine, dobutamine (to maintain chronotropic and inotropic action and eliminate pronounced decrease in blood pressure); in heart failure - the introduction of cardiac glycosides, diuretics, glucagon; with convulsions - in / in the introduction of diazepam; with bronchospasm - inhalation beta2-adrenostimulators.

Phenytoin with the on / in the introduction and drugs for inhalation general anesthesia (derivatives of hydrocarbons) increase the severity of the cardiodepressive action and the likelihood of lowering blood pressure.

With the combined use of bisoprolol changes the effectiveness of insulin and oral hypoglycemic agents, masks the symptoms of developing hypoglycemia (tachycardia, increased blood pressure).

With simultaneous use of bisoprolol reduces the clearance of lidocaine and xanthines (except difillin) and increases their concentration in plasma, especially in patients with initially increased clearance of theophylline under the influence of smoking.

With simultaneous use of Nifedipine can lead to a significant reduction in blood pressure.

Diuretics, clonidine, sympatholytic, hydralazine, and other antihypertensive drugs, when applied simultaneously, can lead to an excessive decrease in blood pressure.

Cordinorm prolongs the action of non-depolarizing muscle relaxants and the anticoagulant effect of coumarins.

It is not recommended simultaneous use with MAO inhibitors due to a significant increase in the hypotensive effect, the interval in treatment between taking MAO inhibitors and bisoprolol should be at least 14 days.

Unhydrogenated ergot alkaloids, when used together, increase the risk of developing disorders of the peripheral circulation.

Ergotamine when used together increases the risk of developing peripheral circulatory disorders.