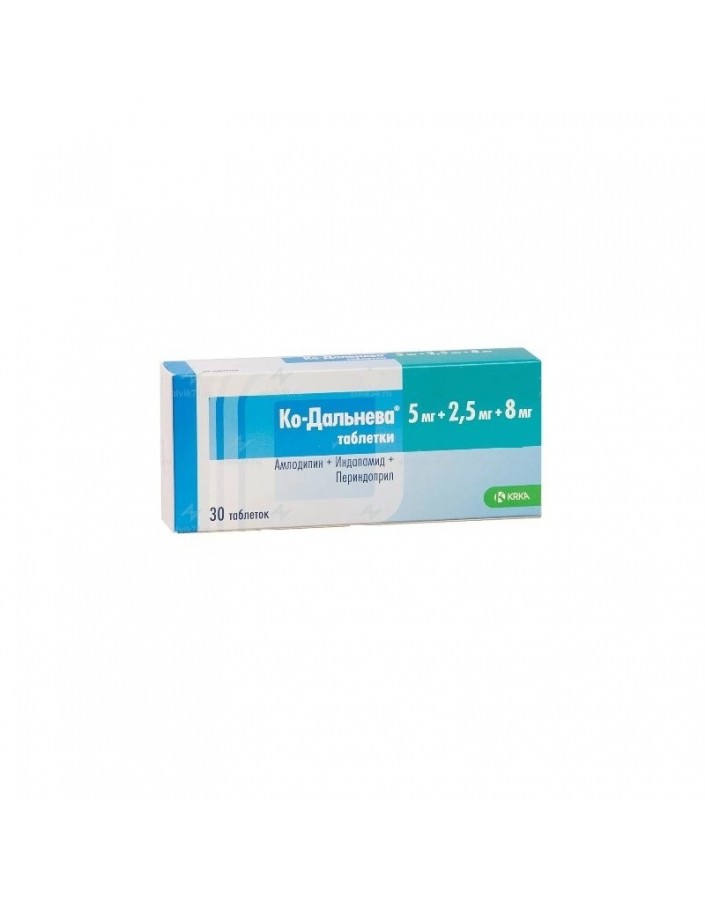 Round, slightly biconvex pills with a facet, white or almost white.

Round, biconvex pills with a facet, white or almost white.

Round, biconvex pills with a facet and a risk on one side, white or almost white.

Ko-Dalneva® combines the properties of each of the active ingredients that have a potentiating effect.

Perindopril is an inhibitor of the angiotensin-converting enzyme. ACE, or kininase II, is exopeptidase, which converts angiotensin I into a vasoconstrictor, angiotensin II, and also destroys bradykinin, which has vasodilating properties, to inactive heptapeptide.

As a result, perindopril provides the following effects:

A study of hemodynamic parameters in patients with chronic heart failure (CHF) revealed:

In addition, an improvement in exercise results with exercise was noted.

The action of perindopril is carried out through an active metabolite - perindoprilat. Other metabolites have no inhibitory effect on ACE in vitro.

Perindopril is effective in the treatment of arterial hypertension (AH) of any severity, reduces both systolic and diastolic blood pressure (BP) in the "lying" and "standing" positions.

The antihypertensive effect reaches a maximum after 4-6 hours after a single ingestion and persists for 24 hours.

Perindopril has an antihypertensive effect in patients with both low and normal renin activity in the blood plasma.

The therapeutic effect occurs less than 1 month from the start of therapy and is not accompanied by tachyphylaxis. Termination of therapy does not cause a "cancellation" syndrome.

Simultaneous use with thiazide diuretic increases the severity of the antihypertensive effect and reduces the risk of hypokalemia in the presence of diuretics.

Indapamide is a sulfonamide derivative. Pharmacologically similar to thiazide diuretics. Indapamide inhibits the reabsorption of sodium ions in the cortical segment of the loop of Henle, which leads to an increase in kidney excretion of sodium and chlorine ions, and to a lesser extent potassium and magnesium ions, thereby increasing diuresis and lowering blood pressure.

In monotherapy mode, the antihypertensive effect persists for 24 hours and manifests itself when the drug is used in doses that have minimal diuretic effect. The antihypertensive effect of indapamide is associated with an improvement in the elastic properties of large arteries, a decrease in CRPS. With indapamide, LVH is reduced. Indapamide does not affect the concentration of lipids in the blood plasma (triglycerides, total cholesterol, low-density and high-density lipoproteins), or indicators of carbohydrate metabolism (including in patients with diabetes mellitus (DM)).

In patients with hypertension, taking amlodipine once a day provides a clinically significant reduction in blood pressure (in the "lying" and "standing" position) for 24 hours. The antihypertensive effect develops slowly, and therefore, the development of acute arterial hypotension is uncharacteristic. In patients with angina, taking amlodipine 1 time per day increases exercise tolerance, the time before the onset of an attack of stenocardia and the "ischemic" depression of the ST segment, reduces the frequency of strokes and the need for Nitroglycerin (short-acting form). Amlodipine does not affect the lipid profile and does not cause changes in the hypolipidemic parameters of blood plasma. The drug can be used in patients with bronchial asthma (BA), diabetes and gout.

With long-term use of the combination of perindopril / amlodipine in patients aged 40 to 79 years with arterial hypertension and at least 3 of the additional risk factors (LVH, diabetes mellitus type 2, atherosclerosis of the peripheral arteries, a previous stroke or transient ischemic attack, male gender, age 55 years and older, microalbuminuria or proteinuria, smoking, total cholesterol / cholesterol high density lipoprotein ≥ 6,early development of coronary heart disease in next of kin) significantly reduced the incidence of complications such as coronary revascularization, fatal and nonfatal stroke, exacerbation of angina, development of diabetes, renal dysfunction and peripheral arterial disease, as well as general coronary and cardiovascular events, cardiovascular mortality compared with Atenolol / bendroflumethiazide.

The combination of perindopril / indapamide has a dose-dependent antihypertensive effect on both systolic and diastolic blood pressure (in the "standing" and "lying" position), regardless of the patient's age. Antihypertensive effect persists for 24 hours. The therapeutic effect occurs less than 1 month from the start of therapy and is not accompanied by tachyphylaxis. Termination of therapy does not cause a "cancellation" syndrome.

In clinical studies, the simultaneous use of perindopril and indapamide

When taken inside, perindopril is rapidly absorbed.Maximum concentration (Cmax) in blood plasma is achieved within 1 hour after ingestion.

There is a linear dependence of the concentration of perindopril in plasma from the dose taken inside.

The volume of distribution (Vd) of free perindoprilat is approximately 0.2 l / kg. The degree of binding of perindoprilat to plasma proteins (mainly with ACE) is about 20% and is dose-dependent.

The pharmacokinetics of perindopril changes in patients with cirrhosis of the liver: the hepatic clearance is reduced by 2 times. However, the amount of perindoprilat formed does not decrease, therefore dose adjustment is not required (see the sections “Directions for use and dosage” and “Special instructions”).

Indapamide is rapidly and completely absorbed from the gastrointestinal tract (GIT). Cmax in blood plasma is achieved approximately 1 hour after taking the drug inside. The degree of binding to plasma proteins is 79%.

T1/2 is 14-24 hours (average 18 hours). Repeated administration of indapamide does not lead to its cumulation. It is eliminated mainly by the kidneys (70% of the ingested dose) and through the intestines (22%) in the form of inactive metabolites.

After oral administration, amlodipine is slowly absorbed from the gastrointestinal tract. Eating does not affect the bioavailability of amlodipine. Cmax amlodipine in blood plasma is achieved 6-12 hours after ingestion. Absolute bioavailability is about 64-80%. Vd is approximately 21 L / kg. In research in vitro The degree of binding of amlodipine to plasma proteins was about 97.5%.

Final t1/2 from blood plasma is about 35-50 hours, which allows taking amlodipine 1 time per day. Amlodipine is metabolized in the liver with the formation of inactive metabolites, while 10% of the amlodipine dose ingested is excreted unchanged, about 60% of the kidneys are excreted as metabolites.Amlodipine is not excreted through hemodialysis.

Time to reach Cmax Amlodipine does not differ in patients of older and younger age. In elderly patients, there is a decrease in the clearance of amlodipine, which leads to an increase in the area under the concentration-time curve (AUC) and T1/2. Dose adjustment in elderly patients is not required, but it is necessary to increase the dose of amlodipine with caution. Increased AUC and T1/2 in patients with CHF corresponds to the estimated value for this age group.

In patients with impaired renal function, changes in the concentration of amlodipine in the blood plasma do not correlate with the degree of renal failure. Possible slight elongation T1/2

In patients with impaired liver function data on the use of amlodipine are limited, there is a decrease in the clearance of amlodipine, which leads to an increase in T1/2 and AUC by about 40-60%.

Given the lack of sufficient clinical experience should not be used in patients on hemodialysis, as well as in patients with untreated heart failure in the stage of decompensation.

With care (see also sections "Special Instructions" and "Interaction with Other Medicines"):

The available data on the teratogenicity of ACE inhibitors in the first trimester of pregnancy are not convincing, but this risk cannot be completely excluded. In the II and III trimesters of pregnancy, the effect of ACE inhibitors on the fetus can lead to impaired development (reduced kidney function, oligohydramnios, delayed ossification of the skull bones) and the development of complications in the newborn (renal failure, arterial hypotension, hyperkalemia). If the ACE inhibitor was used in the II or III trimester of pregnancy, an ultrasound examination of the kidneys and bones of the fetal skull is recommended. Newborns whose mothers received ACE inhibitors during pregnancy need careful medical observation, as there is a risk of arterial hypotension.

Prolonged use of thiazide diuretics in the third trimester of pregnancy can cause maternal hypovolemia and a decrease in uteroplacental blood flow, which

during diuretic administration, hypoglycemia and thrombocytopenia develop in newborns shortly before birth.

The safety of using amlodipine during pregnancy has not been established.The limited data available on the use of amlodipine and other BMCC during pregnancy indicate the absence of a negative effect on the fetus. In animal studies, signs of reproductive toxicity were observed with the use of high doses of amlodipine. In some patients treated with BMCC, a reversible decrease in sperm motility was observed. Clinical data regarding the potential effect of amlodipine on reproductive function is insufficient.

It is not known whether perindopril is excreted in breast milk.

Indapamide is excreted in breast milk. Acceptance of thiazide diuretics causes a decrease or suppression of lactation in the mother; in a newborn, it is possible that hypersensitivity to sulfonamide derivatives, hypokalemia and “nuclear” jaundice may develop.

There is no data on the excretion of amlodipine with breast milk. However, it is known that other BCCA derivatives of dihydropyridine are excreted in breast milk.

Inside, on 1 pill once a day, preferably in the morning, before meals.

The dose of the drug Co-Dalneva® is selected after a previously conducted titration of doses of individual components of the drug.

The elimination of perindoprilat in elderly patients and patients with renal insufficiency is slow. Therefore, in such patients it is necessary to regularly monitor the concentration of creatinine and the content of potassium in the blood plasma.

The drug Co-Dalneva® contraindicated for use in patients with QA less than 60 ml / min (see section "Contraindications"). Such patients are recommended individual selection of doses of perindopril, amlodipine, indapamide. Amlodipine, used in equivalent doses, is equally well tolerated by patients of both elderly and younger age. No dosing regimen is required in elderly patients, but the dose should be increased with caution, which is associated with age-related changes and prolongation of T1/2.

Changes in the concentration of amlodipine in the blood plasma do not correlate with the severity of renal failure.

The drug Co-Dalneva® contraindicated in patients with severe hepatic insufficiency.

Caution must be exercised when using the drug in patients with mild and moderate liver dysfunction.