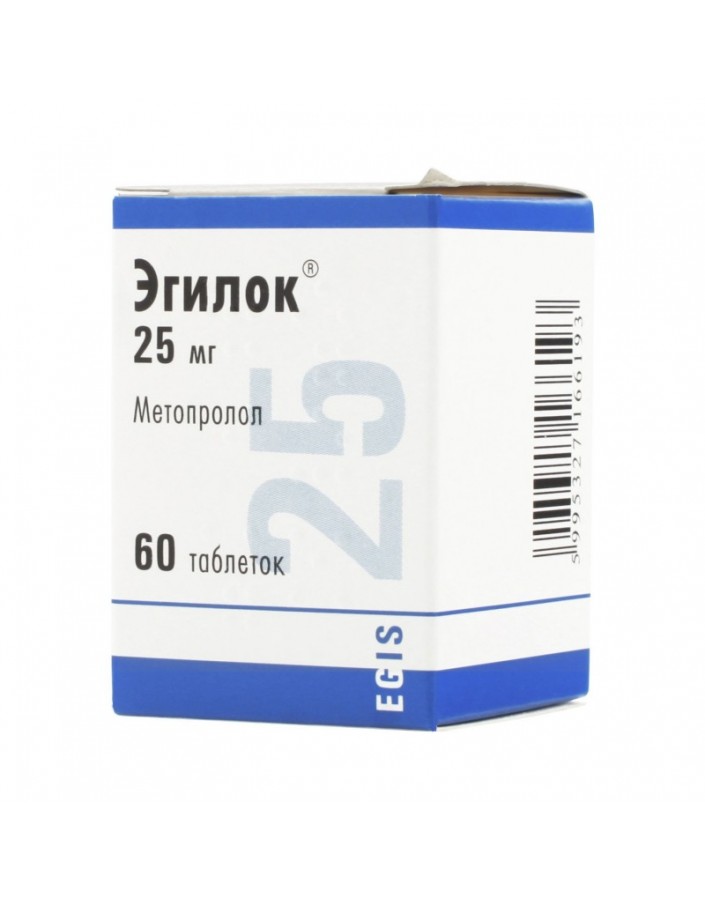 The use of Egilok during pregnancy is possible only when the intended benefit to the mother outweighs the potential risk to the fetus. If necessary, the appointment of the drug in this period requires careful monitoring of the condition of the fetus and newborn for 48-72 hours after delivery, since intrauterine growth retardation, bradycardia, hypotension, respiratory depression, hypoglycemia are possible.
The effect of metoprolol on a newborn while breastfeeding has not been studied, so women who take Egilok should stop breastfeeding.

In the appointment of the drug Egilok should regularly monitor heart rate and blood pressure. The patient should be warned that when a heart rate is less than 50 beats / min, a doctor’s consultation is necessary.
Patients with diabetes should regularly monitor blood glucose levels and, if necessary, adjust the dose of insulin or oral hypoglycemic drugs.
Appointment of Egilok in patients with chronic heart failure is possible only after reaching the stage of compensation.
In patients taking Egilok, it is possible to increase the severity of hypersensitivity reactions (against the background of burdened allergological anamnesis) and the lack of effect from the administration of usual doses of epinephrine (adrenaline).
With the use of Egilok, the symptoms of peripheral circulatory disorders may worsen.
Egilok should be abolished gradually, consistently reducing its dose within 10 days. With a sharp cessation of treatment may cause withdrawal (increased angina attacks, increased blood pressure). In the period of discontinuation of the drug, patients with angina pectoris must be under close medical supervision.
In case of angina pectoris, the selected dose of the drug should provide the heart rate at rest within 55-60 beats / min, with a load - no more than 110 beats / min.
Patients using contact lenses should take into account that, during treatment with beta-blockers, a reduction in the production of tear fluid is possible.
Metoprolol may mask some clinical manifestations of hyperthyroidism (tachycardia). Sharp cancellation in patients with thyrotoxicosis is contraindicated, as it can strengthen the symptoms.
In case of diabetes mellitus, taking Egilok can mask the symptoms of hypoglycemia (tachycardia, sweating, increased blood pressure).
When prescribing metoprolol to patients with asthma, simultaneous use of beta is necessary.2- adrenomimetics.
In patients with pheochromocytoma Egilok should be used in combination with alpha-blockers.
Before any surgical intervention, it is necessary to inform the anesthesiologist about the therapy with Egiloc (the choice of the drug for general anesthesia with minimal negative inotropic effect); drug withdrawal is not required.
In the appointment of the drug in elderly patients should regularly monitor liver function. Correction of the dosing regimen is required only in case of emergence in elderly patients of increasing bradycardia, a pronounced decrease in blood pressure, AV blockade, bronchospasm, ventricular arrhythmias, and severe liver function impairment. Sometimes it is necessary to stop treatment.
It should be a special monitoring of patients with depressive disorders in history. If depression develops, Egilok should be canceled.
Use in pediatrics
Efficacy and safety of using Egilok children and adolescents under the age of 18 not defined.
Influence on ability to drive motor transport and control mechanisms
In patients whose activities require increased attention, the question of prescribing the drug on an outpatient basis should be resolved only after evaluating the patient's individual response.

Symptoms: severe sinus bradycardia, dizziness, nausea, vomiting, cyanosis, hypotension, arrhythmia, ventricular extrasystoles, bronchospasm, syncope; in acute overdose - cardiogenic shock, loss of consciousness, coma, AV-blockade until the development of complete transverse blockade and cardiac arrest.
The first signs of overdose appear 20 min-2 h after administration.
Treatment: gastric lavage, the appointment of adsorbents, symptomatic therapy: with a pronounced decrease in blood pressure - Trendelenburg position, in the case of acute arterial hypotension, bradycardia and threatening heart failure - in / in (with an interval of 2-5 minutes), the introduction of beta-adrenostimulyatorov or in / in the introduction of 0.5 -2 mg of atropine sulfate, in the absence of a positive effect - dopamine, dobutamine or norepinephrine. As a follow-up, it is possible to administer 1-10 mg of glucagon, setting a transvenous intracardial electrostimulator. When bronchospasm - in / in the introduction of beta2-adrenostimulants, with convulsions, slow i.v. administration of diazepam. Metoprolol is poorly excreted by hemodialysis.

- 3 years.
Pharmacy sales terms
The drug is available on prescription.