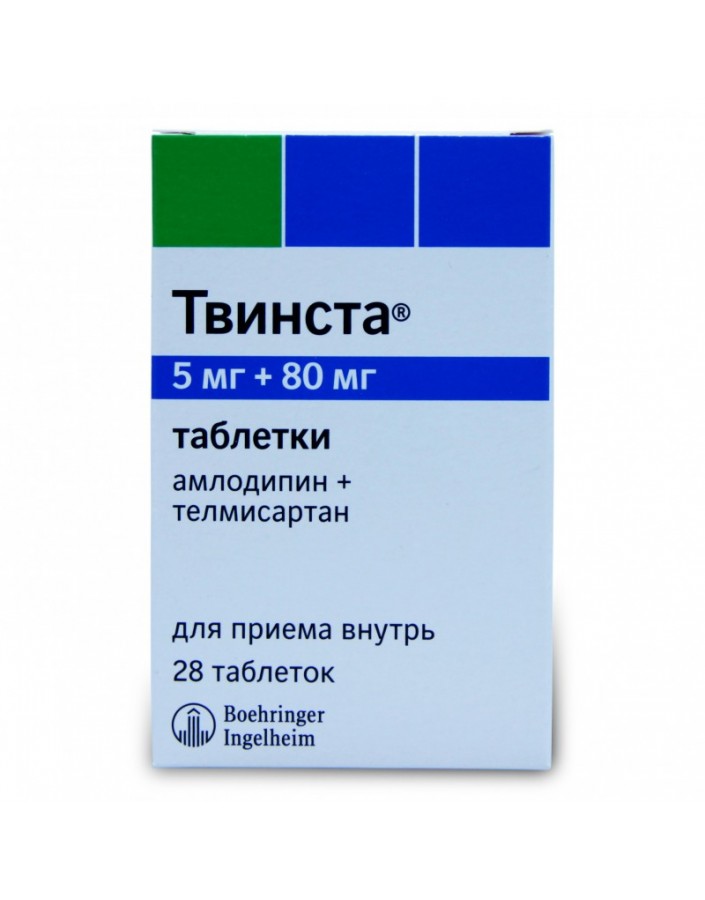 - arterial hypertension (for patients whose blood pressure is not sufficiently controlled by telmisartan or Amlodipine in monotherapy);

- arterial hypertension (for patients for whom combination therapy is indicated);

- in patients with arterial hypertension, receiving telmisartan and amlodipine in the form of separate tablets, as a substitute for this therapy.

Twynsta drug® It is necessary to take 1 time / day, inside, regardless of the meal.

Twinsta® may be administered to patients receiving the same doses of telmisartan and amlodipine as separate tablets, for ease of therapy and increased adherence to treatment.

Twinsta® may be prescribed to patients in whom the use of one amlodipine or one telmisartan does not lead to adequate blood pressure control. Patients taking amlodipine in a dose of 10 mg, in which there are adverse reactions limiting the drug, for example, peripheral edema, can go on to receive the drug Twynsta® at a dose of 40/5 mg 1 time / day, which will reduce the dose of amlodipine, but will not reduce the overall expected antihypertensive effect.

If, at least after 2 weeks of treatment, an additional reduction in blood pressure is required, the dose of the drug can be gradually increased to a maximum dose of 80/10 mg 1 time / day.

Twinsta® can be used with other antihypertensive drugs.

In patients with impaired renal function, including those on hemodialysis, no changes in the dosage of the drug are required. Amlodipine and telmisartan are not removed from the body during hemodialysis.

In patients with mild or moderate hepatic impairment, the drug Twynsta® should be used with caution.The dose of telmisartan should not exceed 40 mg 1 time / day.

Dosing regimen does not require changes.

After the first dose of telmisartan, the hypotensive effect gradually develops during the first 3 hours and the effect of the drug lasts for 24 hours and remains significant until 48 hours.

In the case of abrupt withdrawal of telmisartan, blood pressure gradually returns to its original level without the development of withdrawal syndrome.

1) expected based on experience with telmisartan

2) expected based on experience with amlodipine

3) expected with simultaneous use of telmisartan and amlodipine

Additional information regarding the combination of components

- obstructive diseases of the biliary tract;

- obstruction of the outgoing tract of the left ventricle (including a high degree of aortic stenosis);

- Hypersensitivity to other dihydropyridine derivatives.

The drug should be prescribed with caution patients with:

- obstructive diseases of the biliary tract or liver failure;

- reduced bcc and / or hyponatremia;

- other conditions characterized by activation of the RAAS;

- after 1 month after acute myocardial infarction and unstable angina pectoris.

Special studies drug Twynsta® during pregnancy and during lactation were not carried out.The effects associated with the individual components of the drug are described below.

The use of angiotensin II receptor antagonists (ARA II) is contraindicated during pregnancy. When diagnosing pregnancy, the drug should be immediately discontinued. If necessary, alternative therapy should be prescribed.

It is known that the use of ARA II during the II and III trimesters of pregnancy has a fetotoxic effect (reduced kidney function, oligohydramnios, delayed ossification of the fetal skull), and neonatal toxicity (renal failure, arterial hypotension and hyperkalemia) is also observed.

The limited data available on the effects of amlodipine or other Calcium receptor antagonists do not indicate the presence of negative effects on the fetus. However, there is a risk of slowing down the process of childbirth.

Special studies on the allocation telmisartan and / or amlodipine with breast milk in women was not carried out. Animal studies have shown that telmisartan is excreted in milk from lactating animals. Given the possible adverse reactions, the decision to continue breastfeeding or to cancel therapy should be made taking into account its importance to the mother. Studies on the effect on human fertility were not conducted.

In patients with mild or moderate hepatic impairment, the drug Twynsta® should be used with caution. The dose of telmisartan should not exceed 40 mg 1 time / day.

In patients with impaired renal function, including those on hemodialysis, no changes in the dosage of the drug are required. Amlodipine and telmisartan are not removed from the body during hemodialysis.

Dosing regimen does not require changes.

The drug should be administered with caution if the patient has the following conditions:

- bilateral renal artery stenosis or arterial stenosis of a single kidney, severe renal dysfunction.In some patients, due to the suppression of the RAAS, especially when using a combination of agents acting on this system, renal function is impaired (including acute renal failure). Therefore, therapy, accompanied by a similar double blockade of the RAAS, should be carried out strictly individually and with careful monitoring of renal function (including periodic monitoring of the content of potassium and creatinine in blood serum). In cases of dependence of the vascular tone and kidney function, mainly on the activity of the RAAS (for example, in patients with chronic heart failure or kidney diseases, including stenosis of the renal arteries, or stenosis of the artery of a single kidney), the administration of drugs affecting this system, may be accompanied by the development of acute arterial hypotension, hyperasotemia, oliguria, and, in rare cases, acute renal failure;

- condition after kidney transplantation (no experience);

- reduction of bcc and / or hyponatremia due to prior diuretic therapy, restriction of salt, diarrhea or vomiting;

- other conditions characterized by RAAS activation;

Twinsta® less effective in treating patients of the Negroid race (renin activity in the blood is usually reduced in this population).

Studies of the impact on the ability to drive vehicles and control mechanisms were not conducted. However, it should be taken into account that during treatment such undesirable effects as syncope, drowsiness or dizziness may occur. Therefore, when driving a vehicle or machinery, care should be taken. If patients experience these sensations, they should avoid performing such potentially dangerous activities as driving a car or operating machinery.

No overdose cases have been identified. Possible symptoms of overdose consist of symptoms from the individual components of the drug.

Amlodipine - excessive peripheral vasodilation and, possibly, reflex tachycardia. There may be severe and probably prolonged systemic hypotension, up to the development of a fatal shock.

Hemodialysis is not effective. Monitoring the patient's condition, therapy should be symptomatic and supportive.

In order to counteract the blockade of calcium channels, intravenous administration of Calcium gluconate may be useful.

Overdose treatment methods can be used, such as induction of vomiting, gastric lavage, the use of Activated carbon , transferring the patient to the "supine-lying position" and the introduction of plasma substituting solutions in the case of a pronounced decrease in blood pressure.

The interactions between the two active components that are included in fixed doses in the composition of this drug in clinical studies was not observed.

Special studies of drug interactions drug Twynsta® with other drugs was not carried out.

With simultaneous use of the drug Twynsta® With the preparations listed below, the following information should be taken into account.

With simultaneous use with other antihypertensive drugs, the hypotensive effect of the drug Twynsta® may increase.

Drugs that can reduce blood pressure

It can be expected that some drugs, such as Baclofen and amifostine, due to their pharmacological properties, will enhance the hypotensive effect of all antihypertensive drugs, including the drug Twynsta®. In addition, orthostatic hypotension may be enhanced by ethanol, barbiturates, narcotic drugs or antidepressants.

Perhaps a decrease in the hypotensive effect.

With simultaneous use of telmisartan with:

— other antihypertensives: may increase the hypotensive effect. In one study, the combined use of telmisartan and Ramipril showed an increase in AUC.0-24 and Cmax ramipril and ramiprilata 2.5 times. The clinical significance of this interaction has not been established.

— digoxin, Warfarin , hydrochlorothiazide, glibenclamide, Simvastatin and amlodipine: no clinically significant interaction has been identified. An increase in the average concentration of Digoxin in the blood plasma was noted on average by 20% (in one case by 39%). With the simultaneous appointment of telmisartan and digoxin, it is advisable to periodically determine the concentration of digoxin in the blood.

— lithium preparations: There was a reversible increase in the concentration of lithium in the blood, accompanied by toxic effects when taking ACE inhibitors. In rare cases, such changes have been reported with the appointment of angiotensin II receptor antagonists, in particular, telmisartan. With the simultaneous appointment of lithium preparations and angiotensin II receptor antagonists, it is recommended to determine the content of lithium in the blood.

— NSAIDs, including Acetylsalicylic acid in doses, used as an anti-inflammatory agent, cyclooxygenase-2 inhibitors (COX-2) and non-selective NSAIDs , can cause the development of acute renal failure in patients with reduced BCC. Preparations affecting the activity of the renin-angiotensin system, incl. telmisartan may have a synergistic effect.In patients receiving NSAIDs and telmisartan, at the beginning of treatment, BCC should be compensated and renal function should be monitored.

With the simultaneous use of NSAIDs and antihypertensive drugs like telmisartan, a decrease in the antihypertensive effect by inhibiting the vasodilator effect of prostaglandins has been reported.

With simultaneous use of amlodipine with:

— grapefruit and grapefruit juice: at the same time, the use of the drug with grapefruit or grapefruit juice is not recommended, because in some patients, as a result of the increased bioavailability of amlodipine, its antihypertensive effects may increase;

— CYP3A4 isoenzyme inducers - anticonvulsant drugs (for example, Carbamazepine , phenobarbital, phenytoin, phosphenytoin, primidon), rifampicin, St. John's wort (Hypericum perforatum): combined use may lead to a decrease in plasma concentrations of amlodipine. Regular medical surveillance is indicated. During the use of CYP3A4 inducers, as well as after their cancellation, it is recommended (if possible) to change the dose of amlodipine;

The safety of combined use of amlodipine with thiazide diuretics, beta-blockers, ACE inhibitors, long-acting nitrates, Nitroglycerin (used sublingually), NSAIDs, antibiotics and hypoglycemic agents for oral administration has been established.

With simultaneous use of amlodipine and Sildenafil , it was shown that each drug had an independent hypotensive effect.

The simultaneous use of 20 ml of grapefruit juice with a single dose of amlodipine 10 mg taken orally in 20 healthy volunteers did not lead to a significant effect on the pharmacokinetic properties of amlodipine.

The simultaneous use of amlodipine with cimetidine had no significant effect on the pharmacokinetics of amlodipine.

The simultaneous use of amlodipine with Atorvastatin , digoxin, warfarin or cyclosporin did not significantly affect the pharmacokinetics or pharmacodynamics of these drugs.

Based on the experience of using other agents that affect the RAAS, the simultaneous use of the drug Twynsta® and potassium-saving diuretics, potassium-containing additives, potassium-containing food salt, other drugs that increase the potassium content in the blood (for example, heparin), can lead to hyperkalemia, so this indicator should be monitored in patients. In this regard, their simultaneous use with telmisartan requires caution.

The drug should be stored in its original packaging, out of the reach of children at a temperature not exceeding 25 ° C