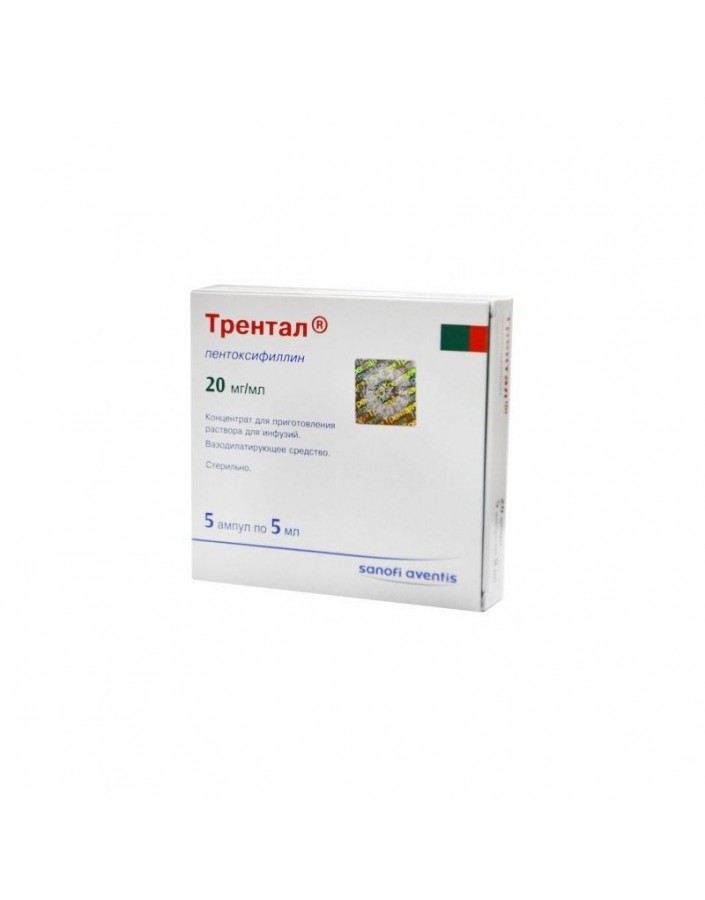 Trental - a drug that improves microcirculation. Angioprotector, a derivative of methylxanthine.
The mechanism of action of pentoxifylline is associated with inhibition of phosphodiesterase and accumulation of cAMP in vascular smooth muscle cells, in the blood cells, in other tissues and organs.
It inhibits platelet aggregation and red blood cells, increases their flexibility, reduces the increased concentration of fibrinogen in the plasma and increases fibrinolysis, which reduces blood viscosity and improves its rheological properties. It has a weak myotropic vasodilating effect, somewhat reduces the round focal disease and has a positive inotropic effect. When using the drug, there is an improvement in microcirculation and oxygen supply to tissues, to the greatest extent in the limbs and the central nervous system, and to a moderate degree in the kidneys. The drug slightly expands the coronary vessels.

Set individually, depending on the severity of circulatory disorders, body weight and tolerance of therapy. Trental is recommended to introduce in / in in the form of infusion, because This is the most effective and easily tolerated form of parenteral administration of the drug.
Recommend the following treatment regimen.
The drug is administered in the form of an infusion of 200-300 mg 2 times / day (morning and afternoon).
When the patient is in serious condition It is possible to conduct a long-term infusion of Trental within 24 hours. At the same time, the dose is determined from the calculation of 0.6 mg / kg body weight per hour. For a patient with a body weight of 70 kg the dose calculated in this way is 1 g, for a patient with a body weight of 80 kg - 1.15 g. The maximum dose should not exceed 1.2 g. The volume of the infusion solution is set individually, taking into account associated diseases. The average volume is 1-1.15 liters for 24 hours.
In some cases, the drug is used as an intravenous injection at a dose of 100 mg (5 ml of solution). The injection is carried out slowly; Inject 5 ml of the solution within 5 minutes. During the injection, the patient should be in the supine position.
In addition to parenteral administration, Trental is prescribed orally at a dose of 800 mg after daily infusion; with a long interval between infusions, an additional 400 mg is prescribed between injections. In the case of an infusion of 1 time / day in the morning, orally, it is prescribed 800 mg daily and 400 mg in the evening.

Careful monitoring is necessary in patients with severe cardiac arrhythmias (risk of worsening arrhythmias), with arterial hypotension (risk of further lowering blood pressure), impaired renal function with CC less than 30 ml / min (risk of cumulation and increased risk of side effects), severe impaired function liver (risk of cumulation and increased risk of side effects) and increased tendency to bleeding, for example, when using anticoagulants or when blood clotting is abnormal (risk of developing more bleeding).
Caution should be exercised in the appointment of Trental to patients with gastric ulcer and duodenal ulcer history; patients who have recently undergone surgery (increased risk of bleeding, and therefore requires systematic monitoring of hemoglobin and hematocrit).
Patients with arterial hypotension and labile blood circulation, parenteral administration of Trental is prescribed gradually, since blood pressure reduction is possible (up to collapse), and in some cases - angina attacks.
Patients with heart failure need appropriate treatment to compensate for blood circulation. At the same time, the introduction of a large volume of liquids should be avoided.
Patients with impaired renal function dosing regimen should be selected individually.

When used together, Trental potentiates the action of a number of antihypertensive and hypoglycemic agents (both insulin and oral hypoglycemic drugs).
The simultaneous administration of pentoxifylline and theophylline may lead to an increase in theophylline levels in the blood and increase its side effects.