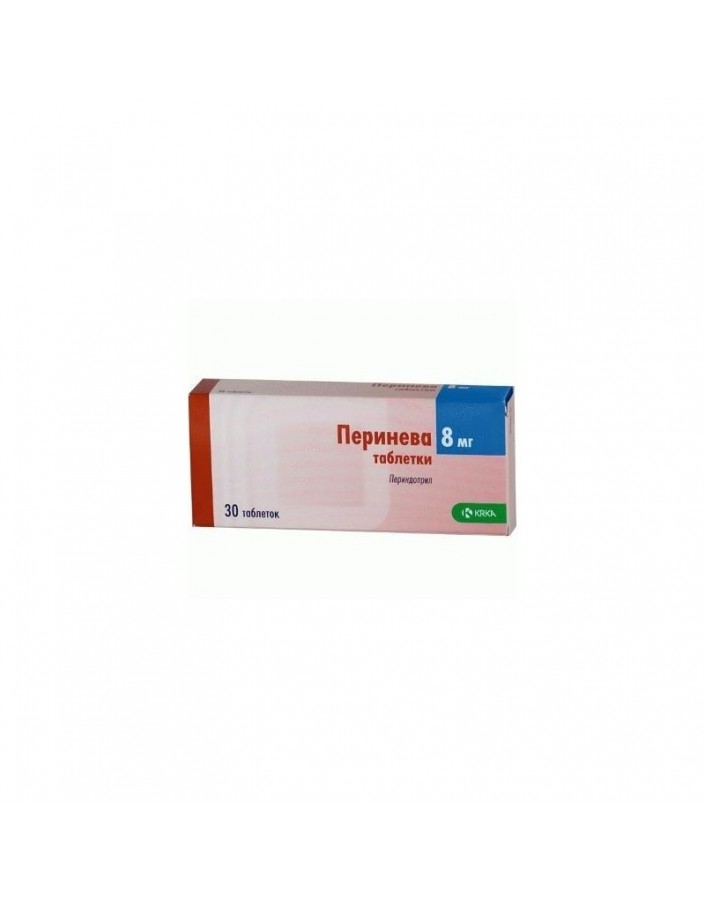 arterial hypertension;
chronic heart failure;
prevention of recurrent stroke (as part of combination therapy with indapamide) in patients with a history of cerebrovascular diseases (stroke or transient cerebral ischemic attack);
stable coronary artery disease: reducing the risk of cardiovascular complications in patients who have previously had a myocardial infarction and / or coronary revascularization.

hypersensitivity to Perindopril or other components of Perineva, as well as to other ACE inhibitors;
history of angioedema (hereditary, idiopathic or angioedema due to the use of ACE inhibitors);
age up to 18 years (efficacy and safety not established);
hereditary intolerance to galactose, Lappa lactase deficiency or glucose-galactose malabsorption syndrome.
Carefully:
Renovascular hypertension, bilateral stenosis of the renal arteries, stenosis of the artery of a single kidney - the risk of developing severe arterial hypotension and renal failure;
CHF in the stage of decompensation, hypotension;
chronic renal failure (Cl creatinine - <60 ml / min);
significant hypovolemia and hyponatremia (due to salt-free diet and / or previous diuretic therapy, dialysis, vomiting, diarrhea), cerebrovascular diseases (including cerebrovascular insufficiency, coronary artery disease, coronary insufficiency) - the risk of an excessive decrease in blood pressure;
aortic or mitral stenosis, hypertrophic obstructive cardiomyopathy, hemodialysis using high-flow polyacrylonitrile membranes - the risk of anaphylactoid reactions;
condition after kidney transplantation - there is no experience of clinical use;
prior to the procedure of LDL apheresis, simultaneous desensitization therapy with allergens (for example, hymenoptera) is the risk of anaphylactoid reactions;
connective tissue diseases (including systemic lupus erythematosus (SLE), scleroderma), inhibition of bone marrow hematopoiesis while taking immunosuppressants, Allopurinol or procainamide - the risk of developing agranulocytosis and neutropenia;
congenital deficiency of glucose-6-phosphate dehydrogenase - isolated cases of hemolytic anemia;
representatives of the Negroid race - the risk of anaphylactoid reactions;
surgical intervention (general anesthesia) - the risk of an excessive decrease in blood pressure;
diabetes mellitus (control of blood glucose concentration);
hyperkalemia;
elderly age.

Inside, it is recommended to take 1 time per day, before meals, preferably in the morning.
The dose of the drug is selected individually for each patient, depending on the severity of the disease and the individual response to treatment.
The drug Perineva can be used in monotherapy and in combination with other antihypertensive drugs.
The recommended initial dose is 4 mg 1 time per day, in the morning. For patients with pronounced activation of the renin-angiotensin-aldosterone system (for example, in case of renovascular hypertension, hypovolemia and / or hyponatremia, CHF in the stage of decompensation or severe arterial hypertension), the recommended initial dose is 2 mg / day in one dose. With the ineffectiveness of therapy during the month, the dose can be increased to 8 mg 1 time per day and with good tolerance of the previous dose.