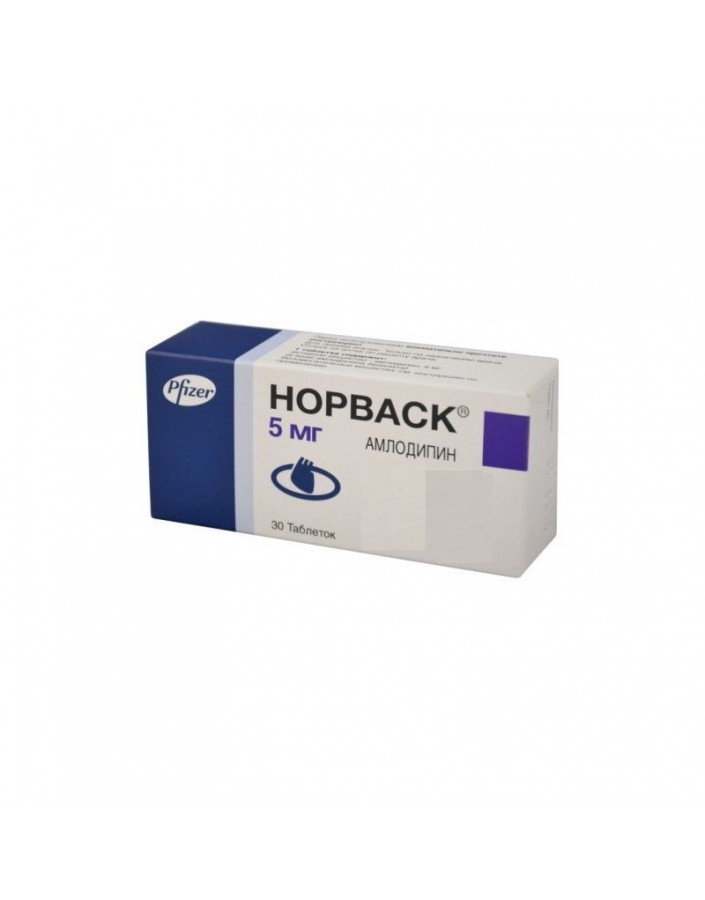 The mechanism of antihypertensive action of Amlodipine is due to a direct relaxing effect on vascular smooth muscle.

Amlodipine reduces myocardial ischemia in two ways: it expands peripheral arterioles and thus reduces congestive heart failure (afterload), while the heart rate remains almost unchanged, which leads to a decrease in energy consumption and oxygen demand of the myocardium; and also expands the coronary and peripheral arteries and arterioles in both normal and ischemic zones of the myocardium, which increases the oxygen supply to the myocardium in patients with vasospastic angina (Prinzmetal angina) and prevents the development of coronary spasm caused by smoking.

In patients with stenocardia, a single daily dose of amlodipine increases the exercise time, retards the development of another attack of stenocardia and ST segment depression (by 1 mm) during its implementation, reduces the frequency of strokes and consumption of Nitroglycerin tablets.

In patients with cardiovascular diseases (including coronary atherosclerosis with a single vessel lesion and up to stenosis of 3 or more arteries and atherosclerosis of the carotid arteries) who have had a myocardial infarction, percutaneous transluminal angioplasty of coronary arteries (TLP) or stenocardia, suffer from an angina of the coronary arteries or suffering with stenocardia, use the card and -media of the carotid arteries, significantly reduces mortality from cardiovascular causes, myocardial infarction, stroke, TLP, coronary artery bypass surgery,leads to a decrease in the number of hospitalizations for unstable angina and the progression of chronic heart failure, reduces the frequency of interventions aimed at restoring coronary blood flow.

Norvask&№174; does not increase the risk of death or the development of complications leading to death in patients with chronic heart failure (NYHA Class III-IV functional class) during therapy with Digoxin, diuretics and ACE inhibitors.

In patients with chronic heart failure (III-IV functional class according to the NYHA classification) of non-ischemic etiology when using Norvasc, there is a likelihood of pulmonary edema.

Norvask&№174; does not have any adverse effect on the metabolism and plasma lipid concentration.

Arterial hypertension (both as monotherapy and in combination with other antihypertensive drugs);

Stable angina and angiospastic angina (Prinzmetal's angina) (both as monotherapy and in combination with other antianginal drugs).

- Hypersensitivity to other dihydropyridine derivatives.

In hypertension and angina, the average initial dose is 5 mg 1 time /, depending on the individual response of the patient, it can be increased to a maximum dose of 10 mg.

Tablets are taken orally 1 time /, washed down with the required volume of water (up to 100 ml).

Changes in the dosing regimen of Norvasc with simultaneous use of thiazide diuretics, beta-blockers or ACE inhibitors are not required.

In elderly patients, the drug is recommended to be used in moderate therapeutic doses; a dose change is not required.

Despite the fact that T1 / 2 amlodipine, like all calcium channel blockers, increases in patients with impaired liver function, no changes in the dose of the drug are usually required in these patients.

In case of renal insufficiency, it is recommended to use Norvask&№174; in usual doses, however, it is necessary to take into account a possible slight increase in T1 / 2.

It can be expected that inhibitors of microsomal oxidation will increase the concentration of amlodipine in plasma, increasing the risk of side effects, and inducers of microsomal liver enzymes - to decrease.

With simultaneous use of Normask with cimetidine, the pharmacokinetics of amlodipine does not change.

Unlike other calcium channel blockers, no significant interaction of Norvask&№174; when used together with NSAIDs, especially with Indomethacin, was found.

Although a normal inotropic effect was not usually observed when studying Norvask&№174;, however, some calcium channel blockers may increase the severity of the negative inotropic effect of antiarrhythmic drugs that prolong the QT interval (for example, Amiodarone and quinidine).

When combined with the use of lithium preparations of calcium channel blockers (there is no data for Norvasc), it is possible to increase the manifestation of their neurotoxicity (nausea, vomiting, diarrhea, ataxia, tremor, tinnitus).

Amlodipine does not affect in vitro the degree of binding to plasma proteins of digoxin, phenytoin, Warfarin and indomethacin.

A single dose of aluminum / magnesium-containing antacids has no significant effect on the pharmacokinetics of amlodipine.

A single dose of Sildenafil in a dose of 100 mg in patients with essential hypertension does not affect the parameters of amlodipine pharmacokinetics.

Repeated use of amlodipine at a dose of 10 mg and Atorvastatin at a dose of 80 mg is not accompanied by significant changes in the pharmacokinetics of atorvastatin.

With simultaneous use of amlodipine with digoxin in healthy volunteers, serum levels and renal clearance of digoxin do not change.

With a single and repeated use at a dose of 10 mg, amlodipine does not significantly affect ethanol pharmacokinetics.

Amlodipine does not affect prothrombin time changes caused by warfarin.

Amlodipine does not cause significant changes in the pharmacokinetics of cyclosporine.

The simultaneous single dose of 240 ml of grapefruit juice and 10 mg of amlodipine orally is not accompanied by a significant change in the pharmacokinetics of amlodipine.

Symptoms: pronounced decrease in blood pressure with the possible development of reflex tachycardia and excessive peripheral vasodilation (there is a likelihood of severe and persistent arterial hypotension, including with the development of shock and death).

Treatment: the appointment of Activated carbon (especially in the first 2 hours after overdose), gastric lavage (in some cases), giving an elevated position to the extremities, actively maintaining the function of the cardiovascular system, monitoring the performance of the heart and lungs, monitoring BCC and diuresis. To restore vascular tone and blood pressure, if there are no contraindications, it is possible to use vasoconstrictor drugs. Use in / in the introduction of Calcium gluconate . Since amlodipine is largely bound to serum proteins, hemodialysis is not effective.