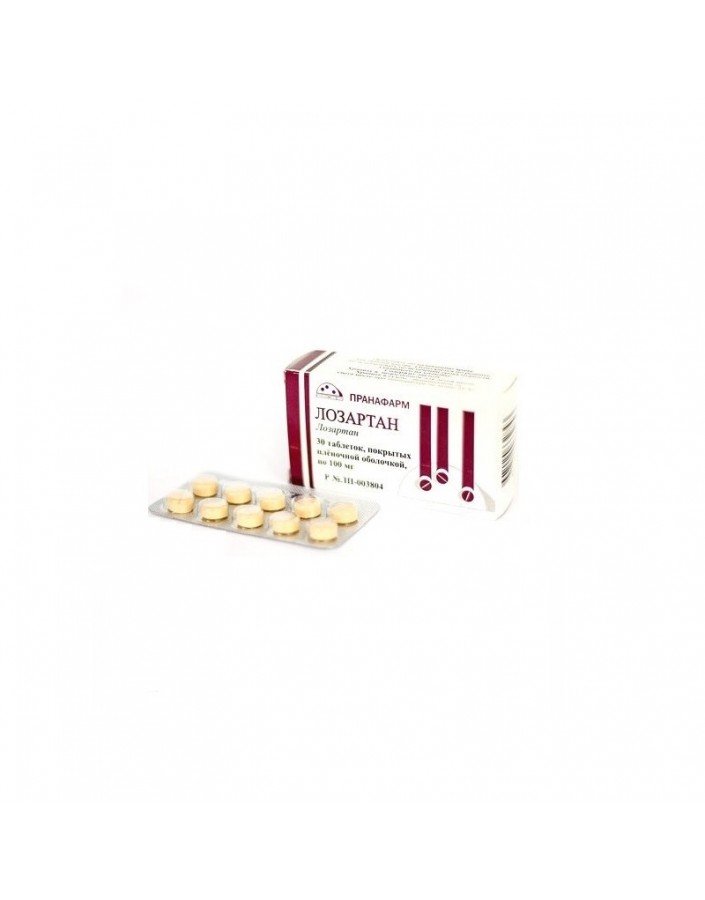 Use during pregnancy and breastfeeding
The drug Losartan Canon is contraindicated in pregnancy. The risk for the fetus in the first trimester is lower compared with the II-III trimesters, since the renal perfusion in the fetus, depending on the renin-angiotensin-aldosterone system (RAAS), appears in the second trimester.
In the first trimester, the drug Losartan Canon is not recommended. However, in those extremely rare cases (less than in one woman out of a thousand), when the use of all other antihypertensive drugs is not possible, the drug may be prescribed under the close supervision of a physician, including a weekly ultrasound examination of the fetus. If signs of oligohydramnion are detected, treatment with the angiotensin II receptor antagonist should be discontinued.
The use of angiotensin II receptor antagonists in the II or III trimester of pregnancy has a toxic effect on the fetus (decreased renal function, development of oligohydramnios, slowing down of the osseification of the skull bones) and the newborn (renal failure, arterial hypotension, hyperkalemia).
Since drugs acting on the RAAS in the II-III trimesters of pregnancy can lead to impaired development and / or fetal death, when the fact of pregnancy is taken, the administration of the drug Losartan Canon should be immediately stopped.
It is recommended to carefully monitor newborns and infants who have been exposed to the antagonist of angiotensin II receptors in utero to monitor the pronounced decrease in blood pressure, oliguria, and hyperkalemia.
It is not known whether losartan is excreted in breast milk, therefore the drug Losartan Canon is contraindicated during breastfeeding. If necessary, taking the drug breastfeeding should be discontinued.

Dosage and administration
Inside, regardless of the meal. Tablets are swallowed, without chewing, with water. Frequency of admission - 1 time / day, preferably at the same time in the morning.
Arterial hypertension
The initial and maintenance dose is 50 mg / day. If necessary, the daily dose may be increased to the maximum100 mg. If a single dose of the drug does not provide the target value of blood pressure, the daily dose should be divided into 2 doses: 25 mg each (losartan may be used in 25 mg tablets or in 50 mg tablets with risk) 2 times a day or 50 mg 2 times a day .
Reducing the risk of cardiovascular disease and mortality in patients with arterial hypertension and left ventricular hypertrophy
The initial dose of the drug is 50 mg 1 time / day. In the future, low-dose hydrochlorothiazide may be added or the dose of Losartan Canon may be increased to a maximum of 100 mg in one or two doses, taking into account a decrease in blood pressure.
Chronic heart failure
The initial dose for patients with chronic heart failure is 12.5 mg (it is possible to use losartan in tablets of 25 mg with a risk) 1 time / day. The dose is titrated 2 times, depending on the tolerability of the drug by the patient, with a weekly interval, i.e. 12.5 mg / day, 25 mg / day,50 mg / day to an average maintenance dose of 50 mg / day.Elderly patients with renal failure dose adjustment is not required.
In patients with type 2 diabetes mellitus with proteinuria to slow the progression of renal failure
The initial dose is 50 mg 1 time / day with a further increase in dose to a maximum of 100 mg / day (taking into account the degree of reduction in blood pressure) in one or two doses.
Special patient groups
In patients with reduced circulating blood volume (BCC) (for example, when taking diuretics in high doses) the recommended initial dose of the drug Losartan Canon is 25 mg (it is possible to use losartan in tablets of 25 mg or tablets of 50 mg with a risk).
Patients with liver failure (less than 9 points on the Child-Pugh scale), during hemodialysis, as well as patients over75 years A lower initial dose of 25 mg is recommended (losartan tablets 25 mg or 50 mg tablets with a risk are possible) once a day.
Not enough experience with the drug in patients with severe hepatic impairmenttherefore, the drug is not recommended for this category of patients (see section "Contraindications").
In patients with moderate renal impairment (CC 20-30 ml / min) dose adjustment is not required.

Interaction with other drugs
It can be used simultaneously with other antihypertensives.
No clinically significant drug interactions of losartan with hydrochlorothiazide, Digoxin , Warfarin , cimetidine, phenobarbital, Ketoconazole and Erythromycin were noted.Rifampicin and Fluconazole are reported to reduce the concentration active metabolite in blood plasma. The clinical significance of these interactions is not yet known.
As with the use of other agents that block the formation of angiotensin II and its effects, the concomitant prescription of potassium-saving diuretics (spironolactone, triamterene, amiloride), potassium supplements and salts containing potassium can lead to an increase in serum potassium ions.
Antihypertensive drugs may increase the antihypertensive effect of losartan.Tricyclic antidepressants, antipsychotics, Baclofen , amifostine, which reduce blood pressure as a main or side effect and may increase the risk of developing hypotension, can also enhance the antihypertensive effect of losartan.
With simultaneous use of angiotensin II receptor antagonists and non-steroidal anti-inflammatory drugs (NSAIDs) (including selective cyclooxygenase-2 inhibitors, Acetylsalicylic acid as an anti-inflammatory agent), the anti-hypertensive effect of losartan may be reduced. In patients with impaired renal function, the simultaneous use of angiotensin II antagonists or diuretics and NSAIDs can cause further deterioration in renal function, including acute renal failure and an increase in serum potassium. This combination should be used with caution, especially in elderly patients.
With simultaneous use of lithium with ACE inhibitors, a reversible increase in the concentration of lithium in the blood serum and the development of toxicity were registered; in very rare cases, this was observed with the use of angiotensin II receptor antagonists. At simultaneous use of lithium with a losartan it is necessary to be careful. If this combination is necessary, it is recommended to control the concentration of lithium in the serum.
Mutually enhances the effect of beta-blockers and sympatholytic; The combined use of losartan with diuretics causes an additive effect.
Double blockade of the RAAS (for example, by combining an angiotensin II receptor antagonist with ACE inhibitors or aliskiren) in patients with an established diagnosis of atherosclerosis, heart failure,or diabetes mellitus with damage to target organs is associated with a higher incidence of arterial hypotension, fainting, hyperkalemia, and impaired renal function (including the development of acute renal failure) compared with the use of single-component RAAS blockade. The question of the use of a double blockade of the RAAS should be resolved in each case individually and with careful monitoring of blood pressure, water-electrolyte balance of the blood and kidney function.

special instructions
In patients with reduced BCC (for example, receiving high doses of diuretics), symptomatic hypotension may occur, so before starting treatment it is necessary to replenish BCC or start treatment with Losartan Canon in a lower dose.
In patients with cirrhosis of the liver, the concentration of losartan in the blood plasma increases significantly, and therefore, in the presence of liver diseases in history, it should be prescribed in lower doses.
During the period of treatment should regularly monitor the content of potassium in the blood plasma and creatinine clearance, especially in elderly patients, patients with impaired renal function, patients with diabetes mellitusType 2, complicated by nephropathy; and these indicators should be especially carefully monitored in patients with heart failure with concomitant renal dysfunction.
Drugs that affect the RAAS can increase the concentration of urea in the blood and serum creatinine in patients with bilateral renal stenosis or stenosis of the artery of a single kidney.
Experience of using losartan in patients after kidney transplantation is not.
In patients with severe chronic heart failure, drugs that affect the RAAS can lead to severe hypotension and acute renal failure. There are separate reports on the development of oliguria and / or increasing azotemia and acute renal failure, including fatal outcomes.
There is not enough experience with losartan in patients with heart failure with concomitant severe renal failure, in patients with severe chronic heart failure.(IV functional class according to the NYHA classification), in patients with heart failure with life-threatening arrhythmias.In these groups, caution should be used drug Losartan Canon with beta-blockers.
Like all drugs with a vasodilating effect, Losartan Canon should be administered with caution to patients with aortic or mitral stenosis, or obstructive hypertrophic cardiomyopathy.
In patients with cerebrovascular diseases of ischemic nature, an excessive decrease in blood pressure can lead to stroke. Medical monitoring is recommended during dose titration.
Caution should be exercised in the appointment of the drug Losartan Canon to patients in the history of which there were indications of postponed angioedema, including when taking other medications, including ACE inhibitors.
Patients with primary hyperaldosteronism usually do not respond to antihypertensive drugs acting through inhibition of the renin-angiotensin system. Therefore, it is not recommended to use the drug Losartan Canon for the treatment of such patients.

Impact on the ability to drive vehicles and mechanisms
No studies have been conducted to assess the effect of the drug on the management of vehicles and machinery.
It should be borne in mind the possibility of drowsiness and dizziness, so care must be taken when performing work that requires increased attention, especially at the beginning of treatment, when increasing the dose of the drug and when driving.