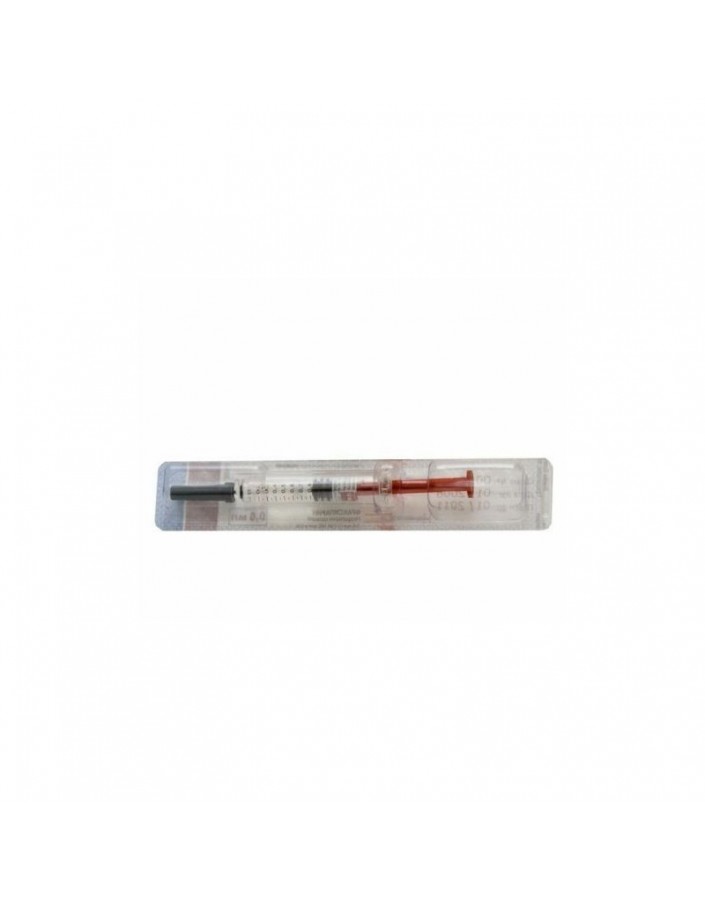 Fraxiparine - nadroparin calcium is a low molecular weight Heparin (LMWH), obtained by depolymerization of standard heparin, is a glycosaminoglycan with an average molecular weight of 4300 daltons.

It exhibits a high ability to bind with plasma protein antithrombin III (AT III). This binding leads to accelerated inhibition of factor Xa, and this is due to the high antithrombotic potential of nadroparin.

Other mechanisms that provide the antithrombotic effect of nadroparin include activation of a tissue factor conversion inhibitor (TFPI), activation of fibrinolysis by direct release of a tissue plasminogen activator from endothelial cells, and modification of blood rheological properties (decrease in blood viscosity and increase in platelet and granulocyte membrane permeability).

Compared with unfractionated heparin, nadroparin has less effect on platelet function and aggregation and less pronounced effect on primary hemostasis.

In prophylactic doses, nadroparin does not cause a pronounced decrease in APTT.

In the course of treatment during the period of maximum activity, it is possible to increase the APTT to a value 1.4 times higher than the standard. Such prolongation reflects the residual antithrombotic effect of nadroparin calcium.

- prevention of thromboembolic complications (with surgical and orthopedic interventions; in patients with a high risk of thrombosis in acute respiratory and / or heart failure under conditions of ICU);

- prevention of blood coagulation during hemodialysis;

- treatment of unstable stenocardia and myocardial infarction without Q wave.

- thrombocytopenia in the application of nadroparin in history;

- signs of bleeding or increased risk of bleeding associated with impaired hemostasis (with the exception of DIC, not caused by heparin);

- organic diseases with a tendency to bleeding (for example, acute gastric or duodenal ulcer);

- injuries or surgeries on the brain and spinal cord or in front of the eyes;

- Hypersensitivity to nadroparin or any other components of the drug.

When s / c administration, it is preferable to administer the drug in the patient's position, in the s / c tissue of the anterolateral or posterolateral surface of the abdomen, alternately on the right and left side. Introduction to the thigh is allowed.

To avoid loss of the drug when using syringes, you should not remove air bubbles before injection.

The needle should be inserted perpendicular, rather than at an angle, into a pinched skin fold formed between the thumb and forefinger. The fold should be maintained throughout the entire period of drug administration. Do not rub the injection site after the injection.

For the prevention of thromboembolism in general surgical practice, the recommended dose of Fraxiparine is 0.3 ml (2850 anti-Xa ME) s / c. The drug is administered for 2-4 hours before surgery, then - 1 time / day. Treatment is continued for at least 7 days or during the entire period of increased risk of thrombosis, until the patient is transferred to an outpatient regimen.

For the prevention of thromboembolism during orthopedic operations, Fraxiparine is injected s / c in a dose that is set depending on the patient’s body weight at the rate of 38 anti-Ha IU / kg, which can be increased to 50% on the 4th postoperative day. The initial dose is prescribed 12 hours before the operation, the 2nd dose - 12 hours after the end of the operation.Further, Fraxiparine is continued to be applied once a day during the entire period of increased risk of thrombus formation until the patient is transferred to the outpatient mode. The minimum duration of treatment is 10 days.

From the blood coagulation system: very often - bleeding of various locations, more often in patients with other risk factors.

Local reactions: very often - the formation of a small subcutaneous hematoma at the injection site; in some cases, there is the appearance of dense nodules (not meaning the encapsulation of heparin), which disappear after a few days; very rarely, skin necrosis, usually at the injection site. Necrosis is usually preceded by purpura or an infiltrated or painful erythematous spot, which may or may not be accompanied by general symptoms (in such cases, treatment with Fraxiparine should be stopped immediately).

Other: very rarely, priapism, reversible hyperkalemia (associated with the ability of heparins to suppress the secretion of aldosterone, especially in patients at risk).

Symptoms: the main symptom of an overdose is bleeding; it is necessary to monitor the number of platelets and other parameters of the blood coagulation system.

At a temperature not higher than 30 ° C