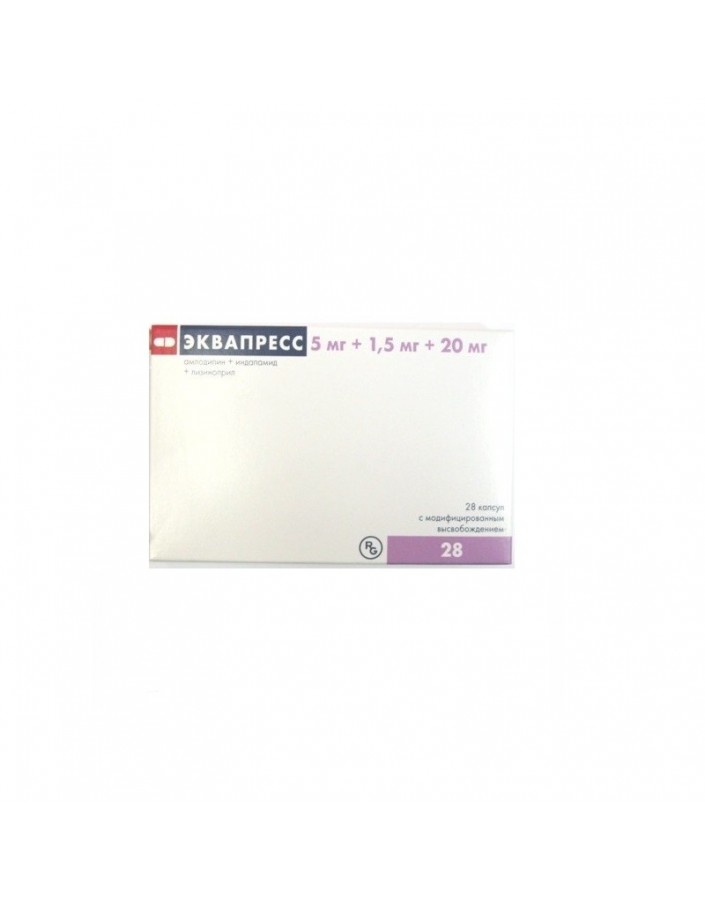 Combined antihypertensive agent, contains - Amlodipine, Indapamide and lisinopril in fixed doses. The components of the combination have complementary mechanisms of action, allowing to control blood pressure, and synergistically have a cardioprotective effect.

The combination of amlodipine, indapamide and lisinopril prevents the possible development of side effects that occur when prescribing individual components. For example, by expanding arterioles, slow Calcium channel blockers (BCCA) can cause sodium retention and body fluids, which leads to activation of the RAAS. The ACE inhibitor blocks this process and normalizes the body's response to salt load. ACE inhibitors significantly reduce hypokalemia caused by diuretics.

Amlodipine - calcium channel blocker, a derivative of dihydropyridine. It has antianginal and hypotensive effects. Amlodipine inhibits the transmembrane transition of calcium ions into cardiomyocytes and smooth muscle cells of the vascular wall. The antihypertensive effect of amlodipine is due to the direct relaxing effect on the smooth muscle cells of the vascular wall. - with angina reduces the severity of myocardial ischemia; expanding peripheral arterioles, reduces total peripheral vascular resistance, reduces afterload on the heart, reduces the need for myocardium in oxygen. It causes expansion of the coronary arteries and arterioles in both intact and ischemic myocardial regions, which increases the oxygen supply to the myocardium, including in patients with Prinzmetal angina.

Indapamide is a sulfonamide derivative. Pharmacologically similar to thiazide diuretics. Indapamide inhibits the reabsorption of sodium ions in the cortical segment of the loop of Henle, which leads to an increase in kidney excretion of sodium and chlorine ions, and to a lesser extent potassium and Magnesium ions, thereby increasing diuresis and reducing blood pressure. In monotherapy mode, the antihypertensive effect persists for 24 hours and is manifested when indapamide is used in doses that have minimal diuretic effect. The antihypertensive effect of indapamide is associated with an improvement in the elastic properties of large arteries, a decrease in CRPS.With indapamide, left ventricular hypertrophy is reduced. Indapamide does not affect the concentration of lipids in the blood plasma (triglycerides, total cholesterol, LDL and HDL), carbohydrate metabolism (including in patients with diabetes mellitus).

Lisinopril - ACE inhibitor, inhibits the transformation of angiotensin I to angiotensin II. A decrease in the concentration of angiotensin II leads to a direct decrease in the secretion of aldosterone. Lisinopril suppresses the degradation of bradykinin and increases the synthesis of prostaglandins. Reduces the OPSS, blood pressure, preload and pressure in the pulmonary capillaries. In patients with CHF increases the minute volume of blood and increases the resistance of the myocardium to stress. Expands arteries to a greater extent than veins. Some effects are attributed to its effect on the tissue renin-angiotensin system. With prolonged use, hypertrophy of the myocardium and the walls of resistive arteries is reduced. Lisinopril improves blood supply to the ischemic myocardium.

After oral administration, amlodipine is slowly absorbed from the gastrointestinal tract. Eating does not affect the bioavailability of amlodipine. WITHmax amlodipine in blood plasma is achieved 6-12 hours after ingestion. Absolute bioavailability is about 64-80%. Vd is approximately 21 l / kg. In in vitro studies, the degree of binding of amlodipine to plasma proteins was about 97.5%. Amlodipine penetrates the BBB and placental barrier.

T extension1/2 in patients with hepatic impairment suggests that with prolonged use, the cumulation of amlodipine in the body will be higher (up to 60 hours).

Indapamide is rapidly and completely absorbed from the gastrointestinal tract. Food intake slightly increases the rate of absorption, but does not affect the completeness of absorption. WITHmax in blood plasma is achieved approximately 1 hour after taking the drug inside. The degree of binding to plasma proteins is 79%.

T1/2 is 14-24 hours (average 18 hours). Repeated administration of indapamide does not lead to its cumulation.It is eliminated mainly by the kidneys (70% of the ingested dose) and through the intestines (22%) in the form of inactive metabolites.

After ingestion, about 25% of lisinopril is absorbed from the gastrointestinal tract. Simultaneous food intake does not affect the absorption of lisinopril. Absorption averages 30%, bioavailability - 29%. After ingestion Cmax lisinopril in blood plasma is reached after 6-8 hours. It is poorly bound to plasma proteins. Lisinopril weakly penetrates the BBB and placental barrier.

Lisinopril is not biotransformed in the body. Excreted by the kidneys in unchanged form. T1/2 is 12 hours

In patients with chronic heart failure, the absorption and clearance of lisinopril is reduced, the bioavailability is 16%.

In patients with cirrhosis of the liver, the bioavailability of lisinopril is reduced by 30%, and clearance by 50% compared with patients with normal liver function.

Arterial hypertension (if necessary, simultaneous therapy with amlodipine, indapamide and lisinopril in doses used in monotherapy with individual components).

For oral administration. A single dose of this combination is taken 1 time / day.

Fixed-dose combination drugs are not recommended for initial therapy. Drugs containing this combination in fixed doses, which have achieved adequate blood pressure control while receiving lisinopril, amlodipine and indapamide, which the patient takes at the same time in the same doses as in the combined preparation.

From the organ of hearing and balance: infrequently - tinnitus.

Since the cardiovascular system: often - a feeling of heartbeat, a feeling of flushing to the skin of the face; infrequently - pronounced decrease in blood pressure (including orthostatic hypotension); very rarely - myocardial infarction, possibly due to an excessive decrease in blood pressure in high-risk patients, cardiac arrhythmias (including bradycardia, ventricular tachycardia and atrial fibrillation), vasculitis (including hemorrhagic vasculitis).

On the part of the respiratory system: infrequently - shortness of breath, rhinitis; very rarely - cough.

From the genital and breast organs: infrequently - impotence, gynecomastia.

Laboratory and instrumental data: unknown frequency - prolongation of the QT interval on the electrocardiogram, increase in the concentration of uric acid and glucose in the blood.

On the part of the endocrine system: frequency is unknown - syndrome of inadequate secretion of ADH.

From the genital and breast organs: infrequently - reduction of potency; rarely - gynecomastia.

Other: very rarely - autoimmune diseases; frequency is unknown - fever (there are reports of lupus-like syndrome, which may include fever, myalgia, arthralgia / arthritis, an increase in antinuclear antibody titer, an increase in ESR, eosinophilia, leukocytosis, may also develop rashes, photosensitivity reactions or other skin manifestations).