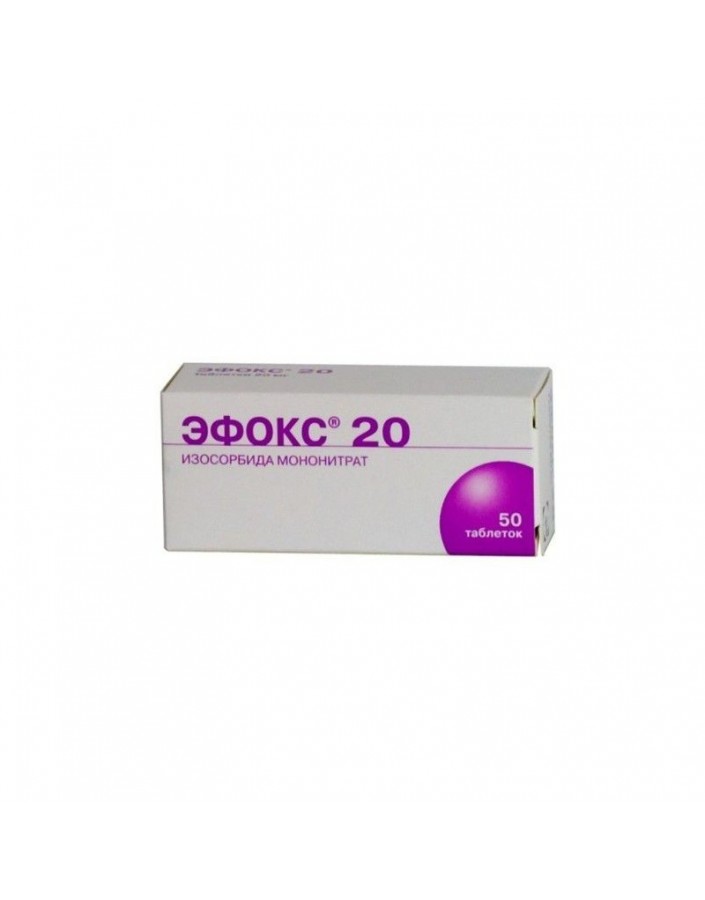 In the blister of 10 tablets. In packing 5 blisters.

Effox 20 - antianginal drug, organic nitrate. Peripheral vasodilator with a predominant effect on the venous vessels.
Stimulates the formation of nitric oxide (endothelial relaxing factor) in the vascular endothelium, which causes the activation of intracellular guanylate cyclase, resulting in an increase in cGMP (vasodilation mediator).
Reduces the oxygen demand of the myocardium by reducing preload and afterload (reduces the end-diastolic volume of the left ventricle and reduces the systolic tension of its walls). It has a coronary expanding action.
Reduces blood flow to the right atrium, helps reduce pressure in the pulmonary circulation and regression of symptoms in pulmonary edema. Promotes redistribution of coronary blood flow in the area with reduced blood circulation.
Increases tolerance to exercise in patients with coronary artery disease, angina. Expands the vessels of the brain, dura mater, which may be accompanied by headache.
Like other nitrates, cross-tolerance develops. After cancellation (interruption of treatment), sensitivity to it is quickly restored.
Antianginal effect occurs within 30-45 minutes after ingestion and lasts up to 8-10 hours.

- Prevention of angina attacks in patients with IHD, incl. after myocardial infarction.
- Chronic heart failure (as part of combination therapy).

- Acute circulatory disorders (shock, vascular collapse).
- Cardiogenic shock, if it is not possible to correct the end-diastolic pressure of the left ventricle by intra-aortic counterpulsation or by administering agents that have a positive inotropic effect.
- Severe arterial hypotension (systolic blood pressure <90 mm Hg, and diastolic blood pressure <60 mm Hg, central venous pressure below 4-5 mm Hg), hypovolemia.
- Simultaneous administration of phosphodiesterase inhibitors, incl. Sildenafil, vardenafil, tadalafil, because they potentiate the hypotensive effect of the drug.
- Acute myocardial infarction with severe arterial hypotension.
- Anemia (severe form).
- Hereditary intolerance to galactose or malabsorption syndrome of glucose and galactose, lactase deficiency.
- Toxic pulmonary edema.
- Lactation period (breastfeeding);
- Children and adolescents under 18 years of age (efficacy and safety have not been established).
- Hypersensitivity to the drug, organic nitrates.
With caution should use the drug for:
- Hypertrophic obstructive cardiomyopathy.
- Constrictive pericarditis.
- Tamponade pericardium.
- Reduced filling pressure of the left ventricle, for example, in acute myocardial infarction (risk of lowering blood pressure and tachycardia, which can increase ischemia), reducing left ventricular function (left ventricular failure). Should not be allowed to reduce systolic blood pressure <90 mm. Hg
- Aortic and / or mitral stenosis.
- Tendencies to arterial hypotension (orthostatic disturbances in the regulation of blood circulation).
- Heart failure with low filling pressure of the left ventricle.
- Glaucoma (risk of increased intraocular pressure).
- Diseases accompanied by an increase in intracranial pressure (previously, an increase in pressure was observed only with IV injection of high doses of nitroglycerin), incl. with a hemorrhagic stroke, a recent head injury.
- Severe anemia.
- Severe renal failure.
- Hepatic insufficiency (risk of developing methemoglobinemia).

During pregnancy and during breastfeeding, the drug should be used very carefully, only after a thorough assessment of the benefits and possible risks, since there is not enough experience with its use during these periods.
In experimental studies on animals, no damaging effect on the fetus was found.

The dose of the drug and the frequency of administration set individually depending on the severity of the disease. It is advisable to start therapy with small doses of the drug: 10 mg 2 times / day. Then gradually increase the dose to therapeutic - 20-40 mg in 1-2 doses. If necessary, the dose is increased to 60 mg / day. The maximum daily dose is 80 mg. The duration of treatment and repeated courses - as recommended by the doctor.
Tablets should be taken orally, after meals, swallowing whole, not chewed and washed down with a small amount of liquid.

Effox 20 is not used for the relief of acute attacks of stenocardia, acute myocardial infarction. During the period of therapy, control of blood pressure and heart rate is necessary.
With long-term use of Effox 20, tolerance may develop, and therefore it is recommended that after 3-6 weeks of regular use of the drug, a break for 3-5 days be taken, replacing Effox with 20 other antianginal drugs.
When taking Effox 20, temporary hypoxemia is possible due to the relative redistribution of blood flow to the hypoventilated alveolar zones. In patients with coronary artery disease, this can lead to a temporary myocardial hypoxia.
If necessary, the use of the drug Effox 20 on the background of arterial hypotension should simultaneously be administered drugs that have a positive inotropic effect.
With the development of intolerance symptoms are not allowed to re-appointment of the drug.
You can not abruptly stop treatment with Effox 20. It is necessary to cancel the drug gradually to avoid the development of withdrawal syndrome.
During the period of drug treatment should be excluded alcohol.
Influence on ability to drive motor transport and control mechanisms: During the period of treatment, it is not recommended to drive vehicles or engage in other potentially dangerous activities that require rapid psychomotor reactions.

It is possible to enhance the hypotensive effect while taking it with other vasodilators, antihypertensives, beta-blockers, slow Calcium channel blockers, diuretics, ACE inhibitors, antipsychotics (neuroleptics) and tricyclic antidepressants, procainamide, ethanol, phosphodite inhibitors, and foshodtechtechteyphodites, neuroleptics, and tricyclic antidepressants, novokainamidom, ethanol, inhibitors, phosphodientists, and tricyclic antidepressants.sildenafil, vardenafil, tadalafil).
The simultaneous use of isosorbid mononitrate with dihydroergotamine can lead to an increase in the concentration of dihydroergotamine in the blood plasma and, thus, enhance its antihypertensive effect.
When combined with Amiodarone, propranolol, blockers of slow calcium channels (verapamil, nifedipine), an antianginal effect may be enhanced.
Under the influence of beta-adrenomimetics, alpha-blockers (dihydroergotamine), a decrease in the severity of antianginal effect (tachycardia, excessive decrease in blood pressure) is possible.
Barbiturates speed up metabolism and reduce the concentration of isosorbide mononitrate in the blood.
Reduces the effect of vazopressorov.
In combined use with m-holinoblokatorami (atropine) increases the likelihood of increasing intraocular pressure.
Adsorbents, binders and coating agents reduce the absorption of isosorbide mononitrate in the gastrointestinal tract.
The therapeutic effect of norepinephrine (norepinephrine) is reduced while taking it with nitro compounds.
It must be borne in mind that the above-described drug interactions are possible even if the indicated drugs were used shortly before treatment with Effox 20 began.