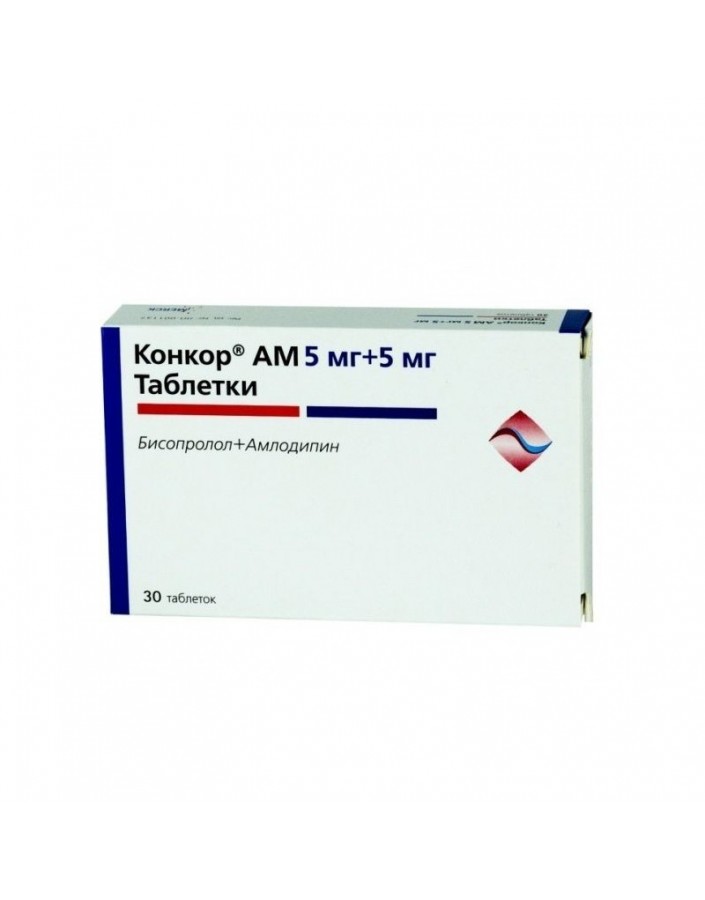 Concor is a selective beta1-adrenergic blocker. When used in therapeutic doses, it has no intrinsic sympathomimetic activity and clinically significant membrane stabilizing properties.
After ingestion, the action develops in 1-3 hours and lasts for 24 hours.
It has a hypotensive effect due to a decrease in cardiac output, inhibition of renin secretion by the kidneys, an effect on the baroreceptors of the aortic arch and carotid sinus. With long-term intake, Concor reduces the initially elevated OPS.
It has antianginal effect. Decreases myocardial oxygen demand by reducing heart rate, reducing cardiac output and reducing blood pressure. Increases the supply of oxygen to the myocardium by reducing the final diastolic pressure and lengthening diastole.
In chronic heart failure, Concor suppresses the activated sympatho-adrenal and renin-angiotensin-aldosterone system, which leads to an improvement in the course of the disease.

- shock;
- AV blockade II and III degree;
- SSSU;
- severe sinoatrial blockade;
- tendency to bronchospasm (bronchial asthma, obstructive respiratory diseases);
- late stages of impaired peripheral circulation;
- simultaneous administration of MAO inhibitors (with the exception of MAO inhibitors of type B);
- if you specify in the history of the presence of psoriasis in the patient or his relatives (the use of beta-blockers, including Concor, should be made only after a thorough assessment of the balance between benefits and risks;
- pheochromocytoma (the appointment of Concor to patients with pheochromocytoma is permitted only after taking alpha-blockers);
- in patients with chronic heart failure, it should not be used during exacerbation of heart failure or during episodes of decompensation of heart failure, in which IV administration of drugs affecting myocardial contractility is required; Besides,for patients with chronic heart failure, Concor is contraindicated in bradycardia if the pulse is less than 50-60 / min and in arterial hypotension, if systolic blood pressure is less than 90-100 mm Hg. st;
- childhood.

Concor should not be prescribed during pregnancy and lactation (breastfeeding) due to the lack of clinical experience with the drug in this category of patients.
In exceptional cases of use of Concor during pregnancy, treatment should be discontinued 72 hours before the expected due date of childbirth because of the possibility of bradycardia, hypoglycemia and respiratory depression in the newborn. If drug withdrawal is not possible, then after delivery the newborn must be under close supervision. Symptoms of hypoglycemia can be expected within the first 3 days.

Nervous system: possible (especially at the beginning of the course of treatment) feeling of fatigue, dizziness, headache, sleep disturbance, depression; rarely - hallucinations. Usually these phenomena are mild and usually disappear within 1-2 weeks.
Special senses: rarely - impaired vision, reduced tearing (should be considered when wearing contact lenses), conjunctivitis.
Cardiovascular: in some cases - orthostatic hypotension, bradycardia, impaired AV conduction, decompensation of heart failure with the development of peripheral edema; paresthesias and feeling of coldness in the limbs are possible. At the beginning of treatment, the condition may worsen in patients with intermittent claudication or Raynaud's syndrome.
Respiratory: rarely - shortness of breath (in patients with a tendency to bronchospasm, including with bronchitis with broncho-obstructive syndrome).
Gastrointestinal: in some cases - diarrhea, constipation, nausea, abdominal pain, increased activity of liver enzymes in the blood plasma (AST, ALT), hepatitis.
Musculoskeletal system: in some cases, muscle weakness, muscle cramps, arthropathy with damage to one or more joints (mono- or polyarthritis).
On the part of the endocrine system: reduced glucose tolerance (with latent diabetes) and masked signs of hypoglycemia; in some cases - an increase in the level of triglycerides in the blood.
From the reproductive system: in some cases - a violation of potency.
Dermatologic: itching is possible; rarely - redness of the skin, increased sweating, rash.