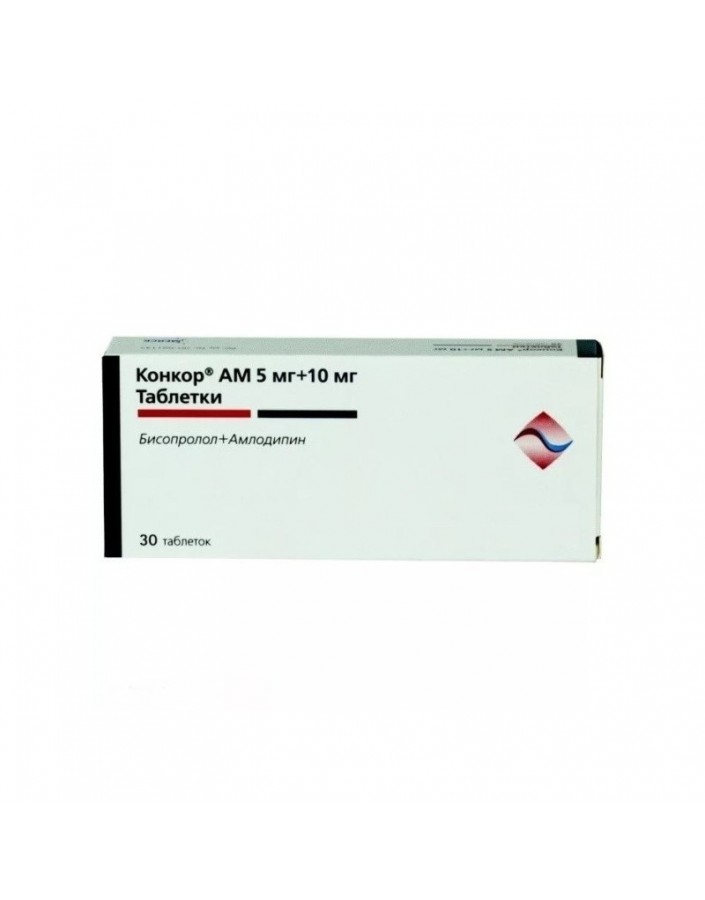 Amlodipine blocks calcium channels, reduces the transmembrane transition of calcium ions into the cell (to a greater extent in vascular smooth muscle cells than in cardiomyocytes).

The antihypertensive effect of amlodipine is due to a direct relaxing effect on vascular smooth muscle cells, which leads to a decrease in the resistance of peripheral vessels.

The mechanism of antianginal action is not fully understood; it may be associated with the following two effects.

1. Expansion of peripheral arterioles reduces the round fist disease afterload Since amlodipine does not cause reflex tachycardia, myocardial energy and oxygen consumption is reduced.

In patients with arterial hypertension, taking the drug 1 time / day causes a clinically significant decrease in blood pressure in the supine position and standing throughout the 24-hour interval between doses of the drug. Due to the slow development of the antihypertensive effect of amlodipine, it does not cause acute arterial hypotension.

In patients with angina, taking the drug 1 time / day increases the total time for performing physical activity, the time before the development of an angina attack, as well as the time for a significant reduction in the ST interval, and also reduces the frequency of angina attacks and the need for sublingual Nitroglycerin.

No negative effect of amlodipine on the metabolism of blood plasma lipids, blood glucose and uric acid serum was detected.

Bisoprolol - Selective Beta1-adrenergic blocker, without its own sympathomimetic activity, does not have a membrane stabilizing effect.

It has only a slight affinity for c.2adrenergic receptors of the smooth muscles of the bronchi and blood vessels, as well as β2-adrenoreceptors involved in the regulation of metabolism. Therefore, bisoprolol does not generally affect airway resistance and metabolic processes involving β2-adrenoreceptors.

Selective effect of the drug on β1-adrenoreceptors are maintained outside the therapeutic range.

Bisoprolol does not have a pronounced negative inotropic effect.

The maximum effect of the drug is achieved within 3-4 hours after ingestion. Even with the appointment of bisoprolol 1 time / day, its therapeutic effect lasts for 24 hours thanks to 10-12 hours T1/2 from blood plasma. As a rule, the maximum antihypertensive effect is achieved 2 weeks after the start of treatment.

Bisoprolol reduces the activity of the sympathoadrenal system (CAC) by blocking β1-adrenoreceptors of the heart.

With a single ingestion in patients with coronary artery disease without signs of chronic heart failure, bisoprolol decreases heart rate, decreases the stroke volume of the heart and, as a result, decreases the ejection fraction and the myocardial oxygen demand. With long-term therapy initially increased OPS decreases. Reduction of renin activity in the blood plasma is considered as one of the components of the hypotensive effect of beta-blockers.

Amlodipine is well absorbed after oral administration. Cmax in blood plasma observed after 6-12 hours. Taking the drug with food does not affect its absorption. Absolute bioavailability is 64-80%.

In vitro studies have shown that circulating amlodipine is approximately 93-98% bound to plasma proteins.

Amlodipine undergoes intensive metabolism in the liver. Approximately 90% of the dose taken is converted to inactive pyridine derivatives. Approximately 10% of the dose taken is excreted in the urine unchanged. Approximately 60% of the number of inactive metabolites excreted by the kidneys and 20-25% through the intestines.The decrease in plasma concentration is biphasic. Final t1/2 is approximately 35-50 hours, which allows you to enter the drug 1 time / day. The total clearance is 7 ml / min / kg (25 l / h in a patient with a body weight of 60 kg). In older patients, it is 19 l / h.

In elderly patients and patients with renal insufficiency, no significant changes in the pharmacokinetics of amlodipine were observed.

Due to reduced clearance in patients with hepatic impairment, lower initial doses should be prescribed.

Bisoprolol is almost completely (more than 90%) absorbed from the gastrointestinal tract. Its bioavailability due to insignificant metabolism at the "first pass" through the liver (at about 10%) is about 90%
after ingestion. Food intake does not affect bioavailability. Bisoprolol exhibits linear kinetics, and its plasma concentration is proportional to the dose taken in the range from 5 to 20 mg. Cmax in blood plasma is achieved in 2-3 hours

Metabolized by the oxidative pathway without subsequent conjugation. All metabolites are polar (water soluble) and excreted by the kidneys. The major metabolites found in plasma and urine do not exhibit pharmacological activity. The data obtained as a result of experiments with microsomes of human liver in vitro, show that bisoprolol is metabolized primarily using the CYP3A4 isoenzyme (about 95%), and the CYP2D6 isoenzyme plays only a minor role.

Clearance of bisoprolol is determined by the balance between kidney excretion unchanged (about 50%) and metabolism in the liver (about 50%) to metabolites, which are also excreted by the kidneys. Total clearance is 15 l / h. T1/2 -10-12 hours

- arterial hypertension: replacement of therapy with monocomponent drugs amlodipine and bisoprolol in the same doses.

Tablets for oral administration. pills should be taken in the morning, regardless of the meal, without chewing.

The recommended daily dose is 1 pill / day of a certain dosage.

Concor treatment® AM is usually a long-term therapy.

Have patients with impaired liver function Amlodipine excretion may be slowed. A special dosing regimen for this group of patients is not defined, however, the drug in this case should be administered with caution.

For patients with severely impaired liver function The maximum daily dose of bisoprolol is 10 mg.

Patients with impaired renal function mild or moderate correction dosing regimen is usually not required. Amlodipine is not excreted through dialysis. Patients undergoing dialysis should be given amlodipine with extreme caution.

For patients with severe impaired renal function (CC less than 20 ml / min) The maximum daily dose of bisoprolol is 10 mg.

Elderly patients the drug can be prescribed in usual doses. Caution is required only when increasing the dose.

The drug is not recommended for use in children and adolescents under the age of 18 in the absence of data on efficacy and safety.

On the part of the immune system: very rarely - allergic reactions.

From the psyche: infrequently - insomnia, change of mood (including anxiety), depression; rarely - confusion.

On the part of the organ of vision: Infrequently - visual impairment (including diplopia).

On the part of the organ of hearing and labyrinth disorders: infrequently - tinnitus.

From the digestive system: often - nausea, abdominal pain; infrequently - a change in the mode of defecation (including constipation or diarrhea), dyspepsia, dryness of the oral mucosa; very rarely - gastritis, gingival hyperplasia, pancreatitis.

On the part of the respiratory system: infrequently - shortness of breath, rhinitis; very rarely - cough.

From the genital and breast organs: infrequently - impotence, gynecomastia.

On the part of the organ of vision: rarely, reduced tearing (should be considered when wearing contact lenses); very rarely - conjunctivitis.

On the part of the organ of hearing and labyrinth disorders: rarely - hearing impairment.

Since the cardiovascular system: often - a feeling of cooling or numbness in the limbs, a pronounced decrease in blood pressure; infrequently - a violation of AV-conduction, bradycardia, aggravation of symptoms of chronic heart failure, orthostatic hypotension.

On the part of the respiratory system: infrequently - bronchospasm in patients with bronchial asthma or a history of airway obstruction; rarely - allergic rhinitis.

From the skin and subcutaneous tissues: rarely, hypersensitivity reactions such as itchy skin, rash, skin hyperemia; very rarely - alopecia. Beta-blockers may exacerbate the symptoms of psoriasis or cause a psoriasis-like rash.

From the genital and breast organs: rarely - impotence.