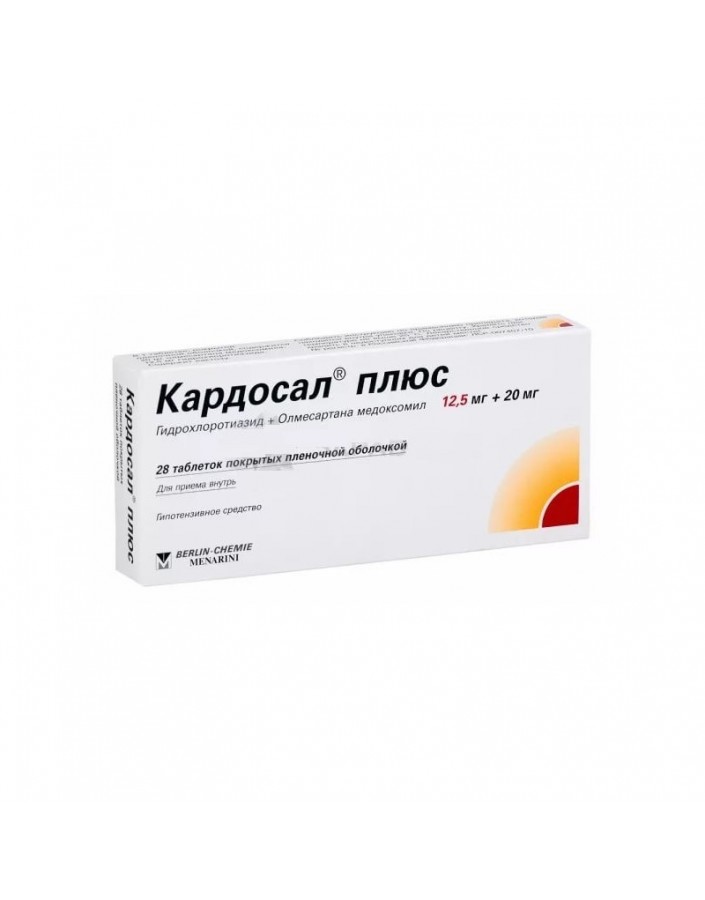 Essential arterial hypertension (with the ineffectiveness of olmesartan medoxomil monotherapy).

Carefully: bronchial asthma; ischemic heart disease (CHD); chronic heart failure in the stage of decompensation; severe cerebrovascular disorders; stenosis of the aortic or mitral valve; hypertrophic obstructive cardiomyopathy; liver dysfunction mild to moderate (less than 9 points on the Child-Pugh scale); renal dysfunction (CC more than 30 ml / min, but less than 60 ml / min.); bilateral stenosis of the renal arteries or stenosis of the artery of a single kidney; condition after recently transferred kidney transplantation (no experience with the drug); primary aldosteronism; diabetes, gout; violations of water and electrolyte balance, dehydration; connective tissue diseases, including systemic lupus erythematosus; patients on a salt-restricted diet or on hemodialysis; in the suppression of bone marrow hematopoiesis; conditions accompanied by a decrease in circulating blood volume; (BCC) including diarrhea, vomiting, or previous diuretic therapy.

Experience with olmesartan medoxomil in pregnant women is absent. However, in view of the existing reports of severe teratogenic effects of drugs acting on the RAAS, like any drug of this class, Cardosal® plus is contraindicated for use in pregnancy. In the case of planning or the occurrence of pregnancy during therapy with Cardosal® plus the drug must be canceled as soon as possible. It is not known whether olmesartan medoxomil is excreted in breast milk, but thiazides are excreted in breast milk and can suppress lactation, therefore, if necessary, use Cardosal® plus during lactation to stop breastfeeding for the duration of its administration.

Symptomatic arterial hypotension, especially after taking the first dose of the drug, can occur in patients with reduced BCC and / or reduced sodium concentration due to intensive diuretic therapy, restriction of salt intake with food in the diet, and also due to diarrhea or vomiting. Relevant factors should be eliminated before using Cardosal® Plus.

Thiazide diuretics, including hydrochlorothiazide, may be the cause of impaired BCC or water-electrolyte balance in blood serum (including hypokalemia, hyponatremia and hypochloraemic alkalosis). Symptoms of precursors are: dryness of the oral mucosa, thirst, weakness, drowsiness, anxiety, myalgia or cramps, muscle weakness, arterial hypotension, oliguria, tachycardia, nausea and vomiting (see the section Side Effects).

The highest risk of developing hypokalemia is in patients with cirrhosis of the liver, in patients during forced diuresis, and in those patients who are also taking glucocorticosteroids or ACTT (see the section on Interaction with Other Drugs). And, on the contrary, due to the antagonism of Cardosal® plus olmesartan medoxomil contained in the preparation, in relation to angiotensin II receptors (AT1), hyperkalemia can occur - primarily in patients with reduced kidney function and / or chronic heart failure, as well as patients with diabetes. In patients with risk factors, regular monitoring of serum potassium concentrations is recommended. There is no data on whether olmesartan medoxomil can reduce hyponatremia caused by diuretics or interfere with its development. In hot weather patients with prone to edema may be dilutional hyponatremia. The decrease in chloride concentration is generally expressed slightly and usually does not require treatment. Thiazides can reduce the excretion of calcium ions by the kidneys and also lead to a transient slight increase in the concentration of calcium in the blood serum in the absence of a history of impaired metabolism. Hypercalihemia may indicate latent hyperparathyroidism. Before examining the function of the parathyroid glands, thiazides should be abolished.

Thiazide diuretics have been proven to increase the excretion of magnesium ions by the kidneys, which can lead to hypomagnesemia.

In patients whose vascular tone and kidney function depend to a large extent on the activity of the RAAS (for example, in patients with severe chronic heart failure or impaired renal function, including renal artery stenosis), treatment with other drugs that affect the RAAS is associated with the possibility of acute hypotension, azotemia, oliguria, or, in rare cases, acute renal failure . The possibility of a similar action cannot be excluded when using angiotensin P. receptor antagonists.

There is an increased risk of developing severe arterial hypotension and renal failure if a patient with bilateral renal artery stenosis or arterial stenosis of the only functioning kidney is receiving therapy with drugs that affect the RAAS. When using the drug Cardosal ® plus in patients with impaired renal function, it is recommended to periodically monitor the concentration of potassium, creatinine and uric acid in the blood serum. The experience of using olmesartan medoxomil in patients with recent kidney transplantation or in patents with the last stage of renal impairment is absent.

In patients with impaired renal function, thiazide diuretics may be associated with azotemia. With the apparent progression of renal failure, it is necessary to review the therapy and decide on the cancellation of diuretics.

As in the case of any antihypertensive drug, an excessive decrease in blood pressure in patients with coronary artery disease or with cerebrovascular insufficiency can lead to myocardial infarction or stroke.

Thiazide diuretics can cause impaired glucose tolerance, as well as an increase in serum levels of cholesterol, triglycerides and uric acid. In patients with diabetes mellitus, it may be necessary to adjust the dose of insulin or a hypoglycemic agent for oral administration (see the section on Interaction with Other Drugs). When treating with thiazide diuretics, latent diabetes mellitus can manifest.

There are reports that thiazide diuretics can contribute to the development of a gout attack and cause an exacerbation of systemic lupus erythematosus. Reactions of hypersensitivity to hydrochlorothiazide can take place with greater probability in patients with aggravated allergic history or bronchial asthma (in anamnesis).

The effect of Cardosal® Plus on the ability to drive vehicles and control mechanisms has not been specifically studied, therefore, during the period of treatment with Cardosal® Plus, care should be taken when driving vehicles and practicing potentially hazardous activities that require increased concentration and psychomotor speed.

Tablets Cardosal® plus is taken orally, regardless of the meal. Prior to the appointment of the combined drug Kardosal Plus, a preliminary selection of the dose of each of the active substances is recommended separately (ie, olmesartan medoxomil and hydrochlorothiazide).

The maximum dose of Cardosal® Plus is 20 mg of olmesartan medoxomil and 25 mg of hydrochlorothiazide 1 time per day.

The combination of olmesartan medoxomil and hydrochlorothiazide

From the side of the central nervous system: often - dizziness; infrequently - syncope.

From the laboratory indicators: very rarely - a slight increase in serum creatinine, uric acid and urea nitrogen, a slight decrease in hemoglobin and hematocrit.

From the side of the central nervous system: very rarely - dizziness, headache.

From the laboratory indicators: very rarely - an increase in serum creatinine and urea concentrations; often - increased activity of liver transaminases.

On the part of the organ of vision: rarely - xantopsia, transient disturbance of accommodation, reduction of the formation of tear fluid.

On the part of the respiratory system: rarely, dyspnea (including interstitial pneumonia and pulmonary edema).

Non-steroidal anti-inflammatory drugs (NSAIDs), including Acetylsalicylic acid in doses of more than 3 g / day, as well as cyclooxygenase-2 inhibitors (COX-2), and angiotensin II receptor antagonists can act synergistically, reducing glomerular filtration. With simultaneous use of NSAIDs and angiotensin II receptor antagonists, there may be a risk of developing acute renal failure, therefore, monitoring renal function at the beginning of treatment is recommended, as well as regular intake of a sufficient amount of fluid. However, simultaneous treatment can reduce the antihypertensive effect of angiotensin II receptor antagonists, leading to a partial loss of their therapeutic efficacy. With simultaneous use with antacids (magnesium and aluminum hydroxides), a moderate decrease in the bioavailability of olmesartan medoxomil is possible. There are reports of a reversible increase in serum lithium concentration and toxicity during simultaneous use of lithium preparations with angiotensin-converting enzyme inhibitors (ACE) and angiotensin II receptor antagonists, therefore, the use of olmesartan medoxomil in combination with lithium preparations is not recommended. If necessary, the use of appropriate combination therapy is recommended to regularly monitor the concentration of lithium in the serum. In rare cases, ACE inhibitors can enhance the hypoglycemic effect of insulin and hypoglycemic oral agents (for example, sulfonylurea derivatives) in diabetic patients. In these cases, with the simultaneous use of ACE inhibitors, it may be necessary to reduce the dose of the hypoglycemic agent for oral administration and insulin.

Glucocorticosteroids, adrenocorticotropic hormone (ACTH), amphotericin B (parenteral), carbenoxolone, penicillin G sodium salt, salicylic acid derivatives: while taking them with hydrochlorothiazide, an increase in electrolyte loss may occur, in particular, the development of hypokalemia.

The simultaneous intake of ion-exchange drugs (colesteramine, colestepol) reduces the absorption of hydrochlorothiazide.

With simultaneous use of hydrochlorothiazide with cardiac glycosides, arrhythmias may occur.

Drugs that can cause arrhythmia type "pirouette" ("torsades des pointes") (a special form of polymorphic ventricular tachycardia with wave, screw or spindle configuration of ventricular complexes in combination with an increase or decrease in the amplitude of the teeth of the QRS complex, which can lead to fibrillation ventricular disease or asystole): due to the risk of hypokalemia, caution is required with simultaneous use of hydrochlorothiazide with certain antiarrhythmic agents (quinidine, hydroquinidine, disopyramide, amiodaride fuck, dofell, mizolastine, nentamidine, sparfloxacin, terfenadine, vincamine for intravenous administration), which are known to cause arrhythmia of the "pirouette" type.

You may need to lower the dose of hypoglycemic agents for oral and insulin.

Anti-gouty agents (probenecid, sulfinpyrazone, allopurinol): it may be necessary to adjust the dose of the hypouricemic agent (increase the dose of probenecid or sulfinpyrazone), since hydrochlorothiazide may increase serum uric acid concentration. Simultaneous use with thiazide diuretics can increase the frequency of hypersensitivity reactions to Allopurinol . The action of sympathomimetics while taking thiazide diuretics may be impaired.

Thiazide diuretics can reduce the excretion of cytotoxic drugs by the kidneys and enhance their myelosuppressive effect.

When taking salicylates in high doses, hydrochlorothiazide may increase their toxic effects on the central nervous system.

There are reports of isolated cases of hemolytic anemia while taking methyldopa with hydrochlorothiazide.

The simultaneous use of cyclosporine with hydrochlorothiazide may increase the risk of hyperuricemia and exacerbation of gout.

The simultaneous use of tetracyclines with thiazide diuretics increases the risk of increasing the concentration of urea caused by tetracyclines. This interaction does not apply to Doxycycline .

With simultaneous use of the drug Cardosal * plus with Baclofen and amifostine, it is possible to enhance the antihypertensive effect.

With the simultaneous use of other antihypertensive agents, the hypotensive effect of the drug Cardosal® Plus may increase. Ethanol, barbiturates, narcotic analgesics, or antidepressants when used with Cardosal® Plus can lead to aggravation of orthostatic hypotension.

Symptoms: with an overdose of olmesartan medoxomil, the most pronounced decrease in blood pressure, as well as tachycardia, bradycardia, nausea, drowsiness are most likely; in case of hydrochlorothiazide overdose, symptoms of electrolyte deficiency (hypokalemia, hypochloremia, hyponatremia) and dehydration due to excessive diuresis.

Treatment: recommended gastric lavage and / or reception of Activated carbon ; therapy aimed at correcting dehydration and impaired water and electrolyte balance. With a marked decrease in blood pressure, it is recommended to lay the patient in a horizontal position, raising his legs, and to conduct therapy aimed at replenishing the BCC. Hemodialysis is not effective.

Store at a temperature not higher than 30 ° C. Keep out of the reach of children.