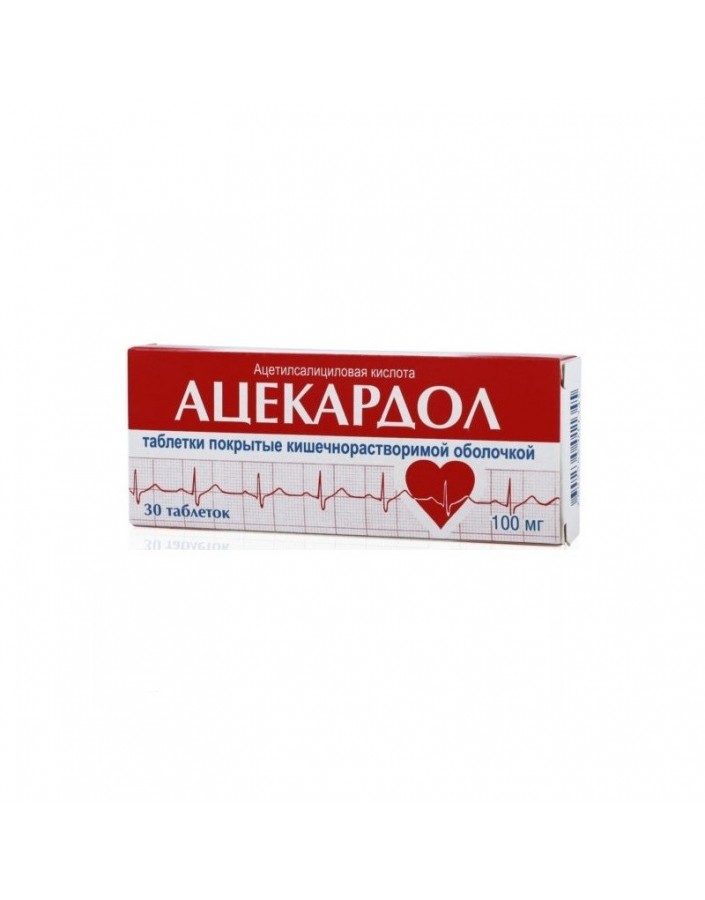 Pharmacological properties pharmachologic effect
The mechanism of the antiplatelet action of acetylsalicylic acid (ASK) is based on the irreversible inhibition of cyclooxygenase (COX-1), as a result of which thromboxane A2 synthesis is blocked and platelet aggregation is inhibited. Antiplatelet effect develops even after the use of small doses of the drug and persists for 7 days after a single dose. It is believed that ASA has other mechanisms for the suppression of platelet aggregation.
In high doses, ASA (over 300 mg / day) also has anti-inflammatory, antipyretic and analgesic effects.

Pharmacokinetics
After oral administration, ASA is rapidly and completely absorbed from the gastrointestinal tract (GIT). ASK is partially metabolized during absorption. During and after absorption, ASK is converted to the main metabolite - salicylic acid, which is metabolized mainly in the liver under the influence of enzymes to form metabolites such as phenyl salicylate, salicylic acid glucuronide and salicyuric acid, found in many tissues and in urine. In women, the metabolic process is slower (lower serum enzyme activity).
The maximum concentration of ASA in the blood plasma is reached 10-20 minutes after ingestion, salicylic acid - after 0.3-2 hours.
Due to the fact that the pills are coated with an acid-resistant coating, ASA is not released in the stomach (the shell effectively blocks the dissolution of the drug in the stomach), but in the alkaline environment of the duodenum.Thus, the absorption of ASA in the form of enteric-pills is delayed by 3-6 hours compared with conventional (without such coating) tablets.
ASK and salicylic acid bind to plasma proteins (from 66% to 98%, depending on the dose) and are rapidly distributed in the body. Salicylic acid passes through the placenta and into breast milk.
The elimination of salicylic acid is dose-dependent, since its metabolism is limited by the capabilities of the enzymatic system. The half-life is from 2-3 hours with the use of ASA in low doses and up to 15 hours with the use of the drug in high doses (usual doses of acetylsalicylic acid as an analgesic). Unlike other salicylates, with repeated use of the drug, non-hydrolyzed ASA does not accumulate in the blood serum. Salicylic acid and its metabolites are excreted by the kidneys. In patients with normal renal function, 80-100% of a single dose of the drug is excreted by the kidneys within 24-72 hours.

Indications for use Prevention of acute myocardial infarction with risk factors (for example, diabetes mellitus, hyperlipidemia, arterial hypertension, obesity, smoking, old age) and repeated myocardial infarction;
Unstable Angina;
Prevention of ischemic stroke (including in patients with transient cerebral circulation);
Prevention of thromboembolism after surgery and invasive interventions on the vessels (for example, coronary artery bypass surgery, carotid artery endarterectomy, arteriovenous bypass surgery, angioplasty and stenting of the coronary arteries, angioplasty of the carotid arteries);
Prevention of deep vein thrombosis and pulmonary thromboembolism and its branches (including during prolonged immobilization as a result of extensive surgical intervention).

Contraindications Hypersensitivity to ASA, erosive and ulcerative lesions GIT (exacerbation), gastro-intestinal bleeding, hemorrhagic diathesis, bronchial asthma induced by intake of salicylates, full or partial combination of asthma, recurrent nasal polyposis and paranasal sinuses and intolerance to ASA expressed kidney failure (creatinine clearance (KK) less than 30 ml / min), severe liver failure (class B and C, Child-Pugh scale),chronic heart failure (III-IV functional class according to the NYHA classification), simultaneous use of Methotrexate at a dose of 15 mg / week and more, pregnancy (I and III trimester), lactation period, children under 18, lactase deficiency, lactose intolerance, glucose -galactose malabsorption.
If you have one of the listed diseases, be sure to consult your doctor before taking the drug.

Storage conditions At a temperature not higher than 25 ° С. Keep out of reach of children.