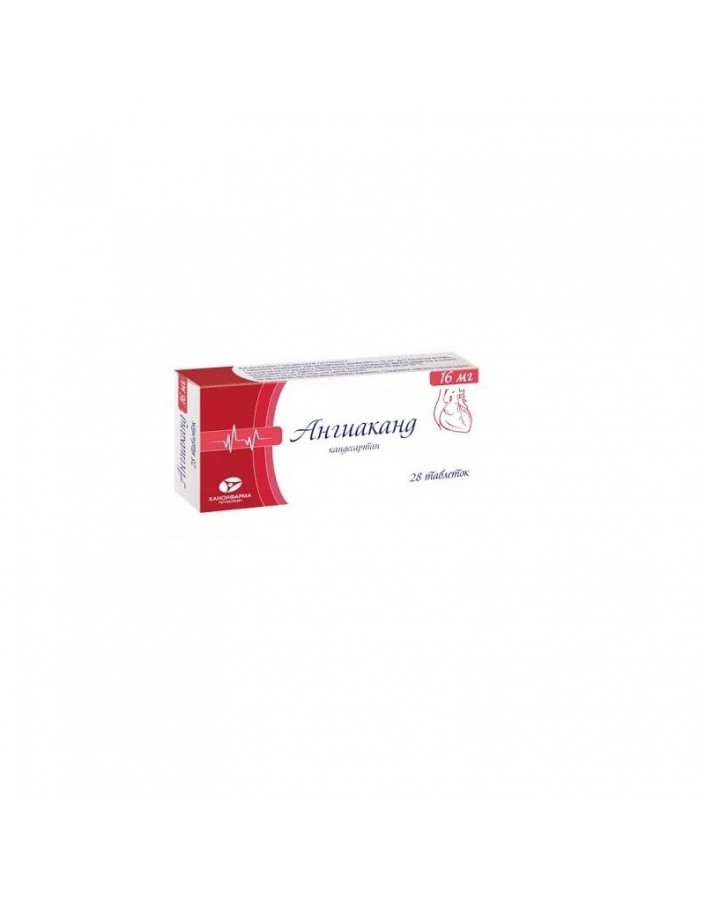 In animal studies, kidney damage was detected in the embryonic and neonatal periods when candesartan was used. It is assumed that the damage mechanism is due to the pharmacological effects of the drug on the RAAS.
In the human embryo, the kidney blood supply system, which depends on the development of the RAAS, begins to form in the second trimester of pregnancy. Thus, the risk to the fetus increases with the use of candesartan in the II and III trimesters of pregnancy.Drugs that have a direct effect on the RAAS can cause abnormal fetal development or have a negative effect on the newborn, even death, when used in the second and third trimesters of pregnancy.
Angiakand should not be used during pregnancy. If pregnancy is detected during drug treatment, therapy should be discontinued as soon as possible.
It is not known whether candesartan is excreted into breast milk. Due to the possible undesirable effect on infants, Angiakand should not be used during lactation.

From the side of the central nervous system: dizziness, weakness, headache.

From the CCC: pronounced decrease in blood pressure.

Laboratory changes: hypercreatininemia, increasing the concentration of urea in the blood, hyperkalemia.

During post-marketing use of candesartan, the following side effects were reported (frequency - less than 1/10000)

From the side of blood-forming organs: leukopenia, neutropenia and agranulocytosis.

From the side of the central nervous system: dizziness, weakness, headache.

Before and during treatment, control of blood pressure, kidney function (plasma creatinine), potassium, and lithium in serum (with the combined use of drugs) is necessary.

Renal artery stenosis. In patients with bilateral renal artery stenosis or arterial stenosis of a single kidney, drugs that affect the RAAS, in particular, ACE inhibitors, may cause an increase in serum urea and creatinine concentrations. Similar effects can be expected when prescribing angiotensin II receptor antagonists.

Renal dysfunction. Against the background of therapy with Angiakand, as with the use of other anti-RAAS drugs, some patients may have impaired renal function.

In patients with chronic heart failure, it is necessary to periodically monitor renal function, especially in patients aged 75 years and older, as well as in patients with impaired renal function. At higher doses of the drug Angiakand it is also recommended to control the content of potassium and creatinine in the blood plasma.

General Anesthesia and Surgery. In patients receiving angiotensin II receptor antagonists, during general anesthesia and during surgical procedures, hypotension may develop as a result of RAAS blockade. Very rarely, there may be cases of severe arterial hypotension requiring IV injection of fluid and / or vasopressor agents.

Hyperkalemia. Clinical experience with other drugs that affect the RAAS shows that the simultaneous use of candesartan with potassium-sparing diuretics, potassium preparations or salt substitutes containing potassium, or other drugs that can increase the potassium content in the blood (for example, heparin) can lead to the development of hyperkalemia in patients with arterial hypertension.

Are common. Patients in whom vascular tone and renal function are primarily dependent on the activity of the RAAS (for example, patients with severe chronic heart failure or kidney disease, including renal artery stenosis), are particularly sensitive to drugs that act on the RAAS. The use of such agents is accompanied in these patients with severe arterial hypotension, azotemia, oliguria and, less commonly, acute renal failure. The possibility of the development of these effects cannot be excluded even with the use of angiotensin II receptor antagonists. A sharp decrease in blood pressure in patients with coronary artery disease or cerebrovascular diseases of ischemic origin when using any antihypertensive drugs may lead to the development of myocardial infarction or stroke.

Influence on ability to steer vehicles, mechanisms. During treatment, dizziness and weakness may occur, so care must be taken when driving and engaging in other potentially hazardous activities that require increased concentration and psychomotor speed.

With the combined use of candesartan with hydrochlorothiazide, Warfarin, Digoxin, oral contraceptives (ethinyl estradiol / levonorgestrel), glibenclamide, Nifedipine and Enalapril, no clinically significant interactions were found.
With the simultaneous use of lithium preparations with ACE inhibitors, a reversible increase in the concentration of lithium in the blood serum and the development of toxic reactions were reported. Adverse reactions may also occur with the use of angiotensin II receptor antagonists, and therefore it is recommended to control the level of lithium in the blood serum with the combined use of these drugs.
With simultaneous use of angiotensin II receptor antagonists and NSAIDs, including selective COX-2 inhibitors and non-selective NSAIDs (for example, Acetylsalicylic acid at a dose of more than 3 g / day), the hypotensive effect of candesartan may be reduced. As in the case of ACE inhibitors, the simultaneous use of angiotensin II receptor antagonists and NSAIDs increases the risk of reduced renal function up to the development of renal failure, which leads to hyperkalemia in patients with impaired renal function. This combination should be used with caution, especially in elderly patients. All patients should receive a sufficient amount of fluid. It is necessary to monitor the kidney function at the beginning of therapy and in the future
Drugs that affect the RAAS can increase the concentration of urea and creatinine in the blood of patients with bilateral renal artery stenosis or arterial stenosis of a single kidney.
Diuretics and other antihypertensive drugs increase the risk of arterial hypotension.
Potassium-sparing diuretics, potassium preparations, salt substitutes containing potassium, and other drugs that may increase serum potassium (for example, heparin) increase the risk of hyperkalemia.
Candesartan is metabolized to the liver to a slight extent (CYP2C9 isoenzyme). Conducted interaction studies did not reveal the effect of candesartan on CYP2C9 and CYP3A4 isoenzymes. The effect on other isoenzymes of the cytochrome P450 system has not been studied.

Symptoms: pronounced decrease in blood pressure, dizziness, tachycardia.
Treatment: symptomatic. Lay the patient on his back, raise the lower limbs above the level of the head, if necessary, increase the BCC by infusion of 0.9% sodium chloride solution, prescribe sympathomimetics. Hemodialysis is ineffective.