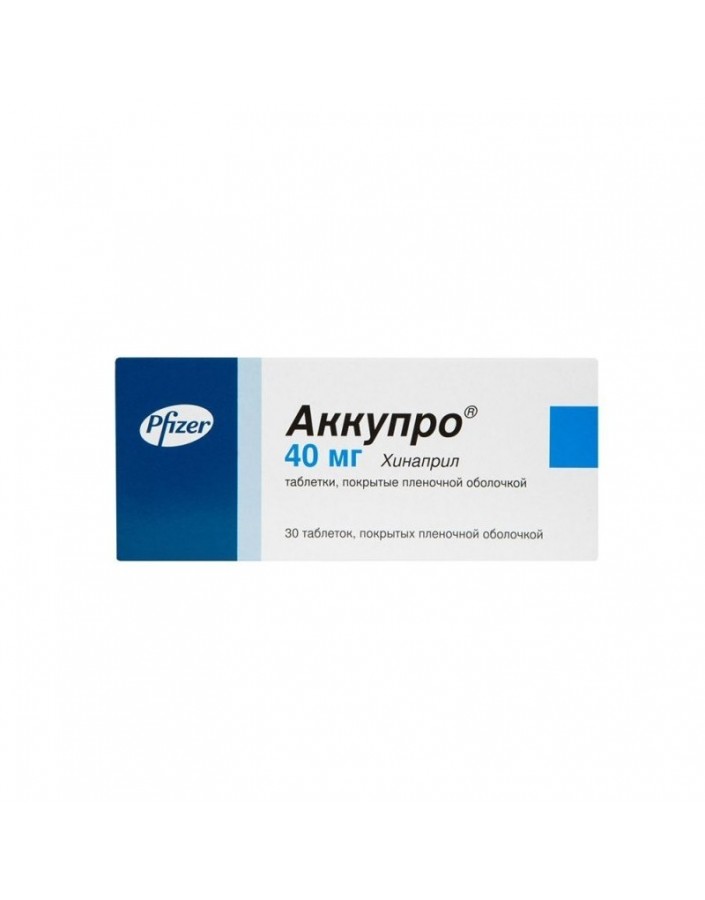 ACE catalyzes the conversion of angiotensin I to angiotensin II, which has a vasoconstrictive effect and increases vascular tone, including by stimulating the production of aldosterone by the adrenal cortex. Quinapril competitively inhibits ACE activity and decreases vasopressor activity and aldosterone production. The elimination of the negative effect of angiotensin II on renin secretion by the feedback mechanism leads to an increase in plasma renin activity. At the same time, a decrease in blood pressure is accompanied by a decrease in OPSS and resistance of renal vessels, while changes in heart rate, cardiac output, renal blood flow, glomerular filtration rate and filtration fraction are minor or absent.

After taking a single dose, the antihypertensive effect develops after 1 hour, reaches a maximum after 2-4 hours. The duration of action depends on the size of the dose taken (up to 24 hours). A clinically pronounced effect develops several weeks after the start of therapy.

Under the action of liver enzymes, quinapril is rapidly metabolized by cleaving the ester group to quinaprilat (the main metabolite is quinapril dibasic acid), which is a powerful ACE inhibitor. About 38% of the ingested dose of quinapril circulates in the blood plasma as quinaprilat.

Approximately 97% of quinapril or quinaprilat circulates in the blood plasma in protein-bound form.Hinapril and its metabolites do not penetrate the BBB.

Elimination of hinaprilat is also reduced in elderly patients (over 65 years of age) and closely correlates with impaired renal function, however, in general, there are no differences in the efficacy and safety of treatment for patients in the elderly or younger.

In patients with alcoholic cirrhosis of the liver, the concentration of hinaprilat is reduced due to a violation of de-esterification of Quinapril.

- arterial hypertension (as monotherapy or in combination with thiazide diuretics and beta-blockers);

- chronic heart failure (in combination with diuretics and / or cardiac glycosides).

The drug is taken orally, regardless of the meal. pills should be swallowed whole, not liquid, squeezed water.

When conducting monotherapy hypertension recommended starting dose Accupro® in patients not receiving diuretics, is 10 mg 1 time / day. Depending on the clinical effect, the dose can be increased (doubled) to a maintenance dose of 20 mg / day or 40 mg / day, which is usually prescribed in 1 or 2 doses. As a rule, the dose should be changed at intervals of 4 weeks. In most patients, the use of the drug Accupro® 1 time / day allows to achieve a stable therapeutic response. The maximum daily dose is 80 mg.

When combined with diuretics, the recommended initial dose of the drug Accupro® in patients continuing to receive diuretics, it is 5 mg 1 time / day, and subsequently it is increased (as indicated above) until the optimal effect is achieved.

At chronic heart failure recommended starting dose of Accupro® makes 5 mg 1 or 2 times / days. After taking the drug, the patient should be monitored to identify symptomatic arterial hypotension. If tolerance of the initial dose of Accupro® good, it can be increased to 10-40 mg / day, divided into 2 doses.

Given the clinical and pharmacokinetic data in patients with impaired renal function the initial dose is recommended to select as follows.

The frequency of drug withdrawal Accupro® as a result of the manifestation of adverse reactions was observed in 5.3% of cases.

On the part of the respiratory system, organs of the chest and mediastinum: often - cough, dyspnea, pharyngitis, chest pain.

From the reproductive system: infrequently - a decrease in potency.

Laboratory values: agranulocytosis and neutropenia were very rarely observed, although a causal relationship with the use of the drug Accupro® not yet installed.

Creatinine and blood urea nitrogen: an increase (more than 1.25 times as compared with VGN) serum creatinine concentration and blood urea nitrogen was observed respectively in 2% and 2% of patients receiving monotherapy with Accupro®. The probability of an increase in these indicators in patients who receive diuretics at the same time is higher than in comparison with the use of Accupro®. With further therapy, the indicators often return to normal.

With the simultaneous use of ACE inhibitors and gold preparations (sodium aurothiomalate, IV), a symptom complex has been described, including facial flushing, nausea, vomiting, and a decrease in blood pressure.

- angioedema edema in history associated with treatment with ACE inhibitors, hereditary and / or idiopathic angioedema;

- simultaneous use with aliskiren and aliskiren-containing drugs, with angiotensin II receptor antagonists or with other drugs inhibiting RAAS (double blockade of RAAS), in patients with diabetes mellitus or in patients with diabetes mellitus with target organ damage (diabetic nephropathy), with impaired renal function (GFR less than 60 ml / min / 1.73 m2), with hyperkalemia (more than 5 mmol / l), with chronic heart failure and arterial hypertension;

WITH caution It should be prescribed to patients with symptomatic hypotension, previously taking diuretics and following a diet with restricted salt intake; in severe heart failure in patients with a high risk of severe arterial hypotension; with a decrease in the volume of bcc (including vomiting or diarrhea); with hyperkalemia; oppression of bone marrow hematopoiesis; with aortic stenosis, hypertrophic obstructive cardiomyopathy, mitral stenosis; with insufficiency of cerebral circulation, coronary artery disease, coronary insufficiency (a sharp decrease in blood pressure during therapy with ACE inhibitors can worsen the course of these diseases); condition after kidney transplantation, in case of bilateral stenosis of the renal arteries or stenosis of the artery of a single kidney; in violation of renal function; in patients on hemodialysis (CC less than 10 ml / min), because data on the use of Accupro® in these patients is not enough; in severe autoimmune systemic diseases of the connective tissue (including SLE, scleroderma); in violation of liver function (especially when used simultaneously with a diuretic); with combination therapy with potassium-sparing diuretic; diabetes; extensive surgical interventions and general anesthesia; while taking other antihypertensive drugs, as well as inhibitors of the enzymes mTOR and DPP-4.

Use of the drug Accupro® contraindicated in pregnancy, women planning pregnancy, as well as women of reproductive age who do not use reliable methods of contraception.

Women of reproductive agetaking the drug Accupro®must use reliable methods of contraception.

When pregnancy occurs drug Accupro® should cancel as early as possible.

The use of ACE inhibitors during pregnancy is accompanied by an increase in the risk of development of abnormalities in the cardiovascular and nervous systems of the fetus. In addition, cases of low water, premature birth, birth with hypotension, kidney disease (including acute renal failure), hypoplasia of the skull bones, contractures of the extremities, deformity of the facial part of the skull, lung hypoplasia, intrauterine growth open arterial duct, as well as cases of fetal death and death of the newborn.

Newborns who have been exposed to intrauterine effects of ACE inhibitors should be monitored to detect arterial hypotension, oliguria and hyperkalemia. When oliguria appears, blood pressure and renal perfusion should be maintained.

Drug Accupro® should not be prescribed during breastfeeding.

Quinapril in combination with a diuretic should be used with caution in patients with impaired function or progressive liver disease, since small changes in water and electrolyte balance can cause the development of hepatic coma.

Given the clinical and pharmacokinetic data in patients with impaired renal function the initial dose is recommended to select as follows.

Carefully the drug should be administered in conditions after kidney transplantation, in case of bilateral stenosis of the renal arteries or stenosis of the artery of a single kidney; in violation of renal function; in patients on hemodialysis (CC less than 10 ml / min), because data on the use of Accupro® these patients are not enough.

The use of the drug is contraindicated in children and adolescents up to 18 years.

In case of treatment with ACE inhibitors, cases of angioedema in the head and neck area are described, incl. and in 0.1% of patients treated with Accupro®. If a guttural whistle or angioedema of the face, tongue or vocal folds appears, it is necessary to immediately stop treatment with Accupro®. The patient must be prescribed adequate treatment and observe it until the edema is relieved. Antihistamines can be used to reduce symptoms. Angioedema involving the larynx can be fatal. If the swelling of the tongue, vocal folds or larynx threatens the development of airway obstruction, emergency treatment is necessary, including the introduction of epinephrine (adrenalin) solution 1: 1000 (0.3-0.5 ml).

In the treatment of ACE inhibitors are also described cases of angioedema. Patients had abdominal pain (with / without nausea and vomiting); in some cases without prior angioedema of the face and normal C1-esterase level. The diagnosis was established using computed tomography of the abdominal region, ultrasound or at the time of the surgeon