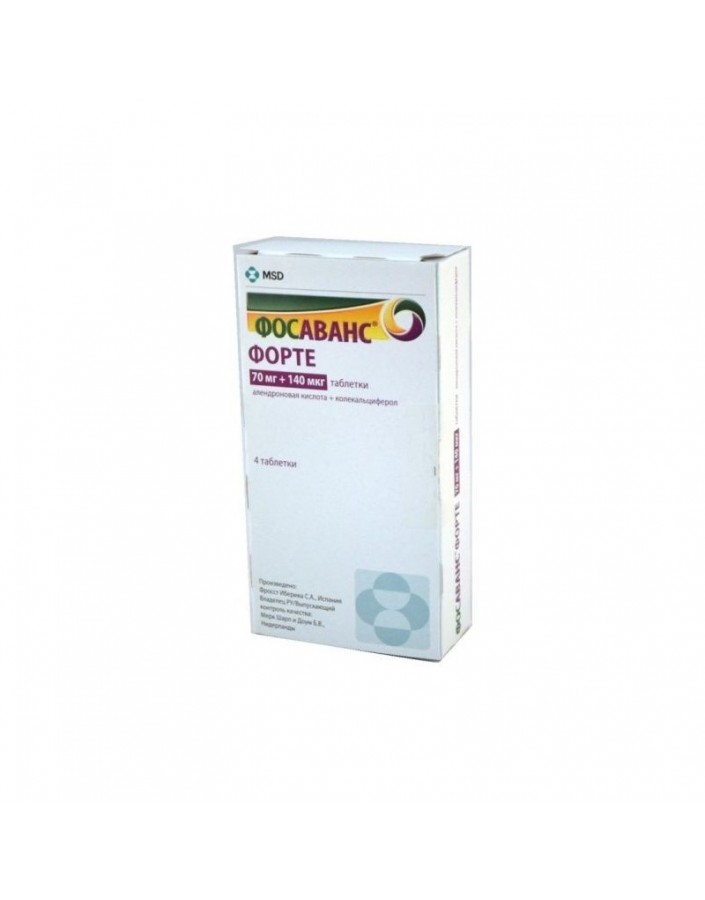 - for the treatment of postmenopausal osteoporosis in patients not additionally taking vitamin D preparations and who are at risk of developing vitamin D deficiency. The drug reduces the risk of vertebral and hip fractures;

- to increase bone mass in men with osteoporosis.

1 tablet, at least 30 minutes before the first meal, liquid or medicine (including antacids, Calcium supplements and vitamins), with a full glass of plain water (not mineral water). Other drinks (including
mineral water), food and some drugs can reduce the absorption of the drug Fosavance ® forte.

To reduce the risk of irritation of the esophagus drug Fosavance® Forte should be taken according to the following rules:

1. To take in the morning immediately after getting out of bed, at least 30 minutes before the first meal, liquid or medicine, drink full a glass of water (not mineral) to facilitate the flow of the pill into the stomach.

2. Do not chew the pills and do not dissolve them in the mouth due to the possible formation of ulcers in the mouth and pharynx. Patients should not go to bed before the first meal, which should be done at least 30 minutes after taking the drug Fosavance® forte.

3. The drug Fosavance® Forte should not be taken at bedtime or before getting out of bed.

The recommended dose is 1 pill of the drug Fosavance® Forte 1 time per week.

Patients should additionally take calcium supplements if their dietary intake is insufficient. Drug Fosavance® Forte satisfies a weekly need for vitamin D based on a daily dose of 800 ME.

For elderly patients and patients with mild to moderate renal insufficiency (CC from 35 to 60 ml / min) dose adjustment is not required. The recommended dose is 1 pill of the drug Fosavance® Forte 1 time per week.

If you accidentally skip the drug, you must take 1 pill in the morning of the next day. You should not take 2 doses on the same day, but later you need to return to taking the drug once a week on the day of the week that was chosen at the beginning of the treatment.

The following adverse reactions were reported during clinical studies and / or post-marketing use of alendronate.

Additional adverse reactions for the drug Fosavance® Forte was not installed.

2 In clinical studies, the frequency was comparable for the group of the drug and the placebo group.

3 See sections "Directions for use and dosage" and "Special instructions"

- esophageal diseases that slow down its emptying, for example, strictures or achalasia;

- inability to sit or stand straight for 30 minutes;

- hypersensitivity to any component of the drug;

- in case of exacerbation of diseases of the upper GI tract, such as dysphagia, esophageal diseases, gastritis, duodenitis or gastric ulcer (including anamnestic information about a peptic ulcer, active gastrointestinal bleeding, surgery on the upper gastrointestinal tract during the year before taking the drug Fosavance® forte).

- in diseases associated with hyperproduction of calcitriol (leukemia, lymphoma, sarcoidosis) and concomitant hypercalcemia and / or hypercalciuria.

Drug Fosavance® Forte is intended for the treatment of women only in the postmenopausal period and is contraindicated during pregnancy and during breastfeeding.

Data on the use of the drug Fosavance® Forte during pregnancy are absent. Animal studies of alendronate did not reveal a direct damaging effect on pregnancy, embryo / fetus development, or postnatal development. The use of alendronate in rats during pregnancy caused a violation of labor due to hypocalcemia. Animal studies show hypercalcemia and reproductive toxicity with high-dose vitamin D.

Contraindicated in severe renal failure (CC <35 ml / min). For patients with mild and moderate renal insufficiency (CC from 35 to 60 ml / min), dose adjustment is not required.

Contraindicated in children under 18 years.

For elderly patients, dose adjustment is not required.

Alendronate may cause local irritation of the mucous membrane of the upper GI tract. In connection with the possibility of deterioration of the underlying disease while taking alendronate, caution should be exercised when prescribing the drug to patients with diseases of the upper GI tract, for example, dysphagia, esophageal disease, gastritis, duodenitis, ulcers, as well as serious GI disease, previous 12 months, for example, peptic ulcer, with gastrointestinal bleeding, surgery, surgery on the upper GI tract, with the exception of pyroloplasty. For patients with a diagnosed Barrett esophagus, the question of prescribing alendronate should be decided individually on the basis of an assessment of the ratio of the expected benefit to the possible risk.

In the treatment of alendronate, there are cases of adverse reactions from the esophagus (esophagitis, ulcer or erosion of the esophagus), sometimes proceeding in a severe form, requiring inpatient treatment, and in rare cases complicated by the formation of a stricture. In this regard, physicians need to pay special attention to any signs or symptoms indicating possible disorders of the esophagus, and patients should be warned about the need to stop taking alendronate and consult a doctor if symptoms of esophageal irritation, such as dysphagia, pain when swallowing or chest pain, the appearance or strengthening of heartburn.

The risk of severe side effects from the esophagus is higher in those patients who violate the recommendations for receiving alendronate and / or continue to take it when symptoms of irritation of the esophagus appear. It is extremely important to fully inform patients about the importance of adherence to the rules of taking the drug and make sure that they understand it. They should be warned that the risk of developing a lesion of the esophagus increases in case of non-compliance with these recommendations.

Although there was no increase in risk in extended clinical trials of alendronate, rare post-morbidity was reported in post-marketing reports. The stomach and duodenal ulcers, sometimes severe and complicated.

Osteonecrosis of the jaw

In patients with cancer who were treated with intravenous bisphosphonates, there were cases of osteonecrosis of the jaw, mainly due to previous extraction of the tooth and / or local infection. (including osteomyelitis).Many of them also received Chemotherapy and glucocorticosteroids.

Also known are cases of osteonecrosis of the jaw in patients with ossoporosis when ingesting bisphosphonates.

In assessing the individual risk of developing jaw necrosis, the following risk factors should be considered:

- The strength of the bisphosphonate (the highest in zoledronic acid), the route of administration (see above) and the total dose;

During the course of bisphosphonates, it is recommended that such patients avoid invasive dental procedures. If a patient develops osteonecrosis during bisphosphonate therapy, dental surgery can worsen his condition. It is not known whether stopping bisphosphonates reduces the risk of osteonecrosis of the jaw in patients who require dental procedures. In each case, the decision must be made by the attending physician based on an assessment of the ratio of the expected benefit to the possible risk for the particular patient.

During therapy with bisphosphonates, patients should be told about the importance of proper oral hygiene, preventive examinations,and also to warn them about the need to report any symptoms of the oral cavity, such as tooth mobility, pain or swelling.

Pain in the bones and muscles

It is known about the occurrence of pain in the bones, joints and / or muscles during the course of bisphosphonates. In post-marketing use, in rare cases, these symptoms were severe and / or resulted in disability. The time of onset of symptoms ranged from one day to several months after the start of treatment. In most patients, symptoms were resolved after discontinuation of treatment. In some of them, the symptoms reappeared when the same drug or another bisphosphonate was resumed.

There are cases of subversion or diaphyseal fractures of the hip during treatment with bisphosphonates, mainly in patients receiving long-term therapy for osteoporosis. These transverse or oblique fractures can occur along the entire length of the thigh from the small skew of the femur to the epistemological expansion. These fractures occur after a minor injury or without it, some patients experience severe pain in the hip or groin, which is often combined with radiological symptoms of stress fractures, weeks or months before the full picture of the hip fracture appears. Fractures are often bilateral, so patients with a hip fracture taking bisphosphonates should examine the second (contralateral) hip.It is known that these fractures grow poorly. If an atypical hip fracture is suspected, the possibility of discontinuing therapy with bisphosphonates should be considered before conducting an individual assessment of the relationship of expected benefit to possible risk.

During therapy with bisphosphonates, patients should be advised to report any pain in the hip or groin. All patients admitted with such complaints should be examined for a hip fracture.

Other causes of osteoporosis should be taken into account, in addition to estrogen deficiency and age.

In the presence of Gicalcemia, the concentration of calcium in the blood must be normalized before the start of treatment with Fosavance.® forte.

Since alendronate increases the content of minerals in bones, a decrease in serum calcium and phosphate levels may be observed, especially when taking glucocorticosteroids, which decrease calcium absorption. Usually such a decrease is slight and asymptomatic.However, rare cases of symptomatic hypocalcemia are known, which sometimes reached a severe degree and developed in patients with a corresponding predisposition (for example, hypoparathyroidism, hypovitaminosis D and calcium malabsorption).

Vitamin D3 may contribute to an increase in the severity of hypercalcemia and / or hypercalciuria when used in patients with diseases that cause uncontrolled calcitriol hyperproduction (for example, leukemia, lymphoma, sarcoidosis). In such patients, it is necessary to control the calcium content in the urine and
serum.

Patients with malabsorption may experience a violation of vitamin D absorption.3.

This drug contains lactose and sucrose. Patients with rare hereditary diseases of intolerance to fructose and galactose, lactase deficiency, glucose-galactose malabsorption and sucrose-isomaltase deficiency should not take this drug.

There is no evidence that the drug Fosavance® Forte directly affects the ability to drive a car or use other mechanisms. Some adverse events; for example, blurred vision, dizziness, severe pain in the joints or muscles (see the section "Side Effects"), observed while taking the drug Fosavance® forte, can affect the ability to drive a car and other mechanisms.

At. Overdose may cause hypocalcemia, hypophosphatemia, and adverse reactions from the upper GI tract: dyspepsia, heartburn, esophagitis, gastritis, and gastric and esophageal ulcers.

There is no specific treatment for alendronate overdose. With an overdose of the drug Fosavance® Forte should take milk or antacids to bind alendronate. In order to avoid irritation of the esophagus should not induce vomiting. Patients should be kept upright.

The toxicity of vitamin D was not observed in healthy adults with a chronic intake in doses below 10,000 IU / day. In clinical studies involving healthy adults, vitamin D supplementation3 in a daily dose of 4000 ME for 5 months did not cause hypercalciuria and hypercalcemia.

Suction of alendronate may be impaired if the drug is taken simultaneously with food, drinks (including mineral water), calcium supplements, antacids and other drugs for oral use. In this regard, the interval between taking the drug Fosavance® Forte and other medications taken by mouth should be at least 30 minutes.

Since the use of NSAIDs is associated with the development of erosive and ulcerative lesions of the gastrointestinal tract, caution should be exercised with the simultaneous use of NSAIDs and alendronate.

In a dry, dark place at a temperature not higher than 25 ° C. Keep out of the reach of children.