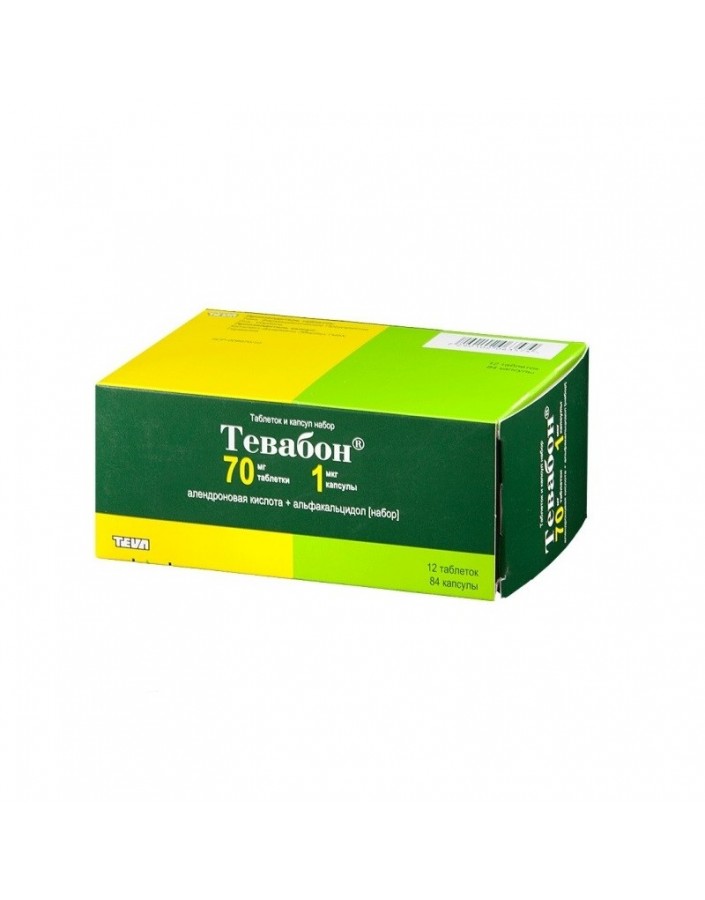 TEVABON - a combined drug for the treatment of osteoporosis.

Alendronic acid, being a bisphosphonate, inhibits the process of active resorption of bone tissue caused by osteoclasts, without having a direct effect on the formation of new bone tissue. Having a tropism for hydroxyapatite bone, alendronic acid accumulates mainly in the areas of its active resorption. The mechanism of action is associated with the suppression of functional activity and the stimulation of osteoclast apoptosis. During therapy with alendronic acid, there is an increase in bone mineralization and an improvement in its quality characteristics.

Alfacalcidol is a regulator of calcium-phosphorus metabolism, the precursor of the active metabolite of vitamin D3 - calcitriol. Increases the absorption of Calcium and phosphorus in the intestines, increases their reabsorption in the kidneys, restores the positive calcium balance in the treatment of calcium malabsorption, reduces the concentration of parathyroid hormone in the blood. By acting on both parts of the bone remodeling process (resorption and synthesis), alfacalcidol not only increases the mineralization of bone tissue, but also increases its elasticity by stimulating the synthesis of proteins of bone matrix, bone morphogenetic proteins, and bone growth factors. In the treatment with alfacalcidol, a bone with a normal histological structure is formed, the strength of bone tissue increases in all parts of the skeleton.

Alendronic acid and alfacalcidol increase bone strength, while their effects are synergistic, thanks to various mechanisms of action. Inhibition of alendronic acid catabolic processes in the bones is complemented by the bone anabolic effect of alfacalcidol, which leads to the formation of a normal bone structure. Due to the pharmacological effects of both substances, their use in combination reduces the potential risk of hypocalcemia, hypercalcemia and hypercalciuria. A significant reduction in the risk of fractures is achieved not only by increasing the strength of the bone, but also due to the extra-bone (pleiotropic) effect of alfacalcidol — an increase in muscle strength, and an acceleration of the speed of the muscle response.

- osteoporosis caused by the use of corticosteroids.

- conditions leading to slower movement of food through the esophagus (including strictures or achalasia of the esophagus);

- the inability of the patient to stand or sit upright for at least 30 minutes;

- the period of pregnancy;

- Hypersensitivity to alendronic acid, alfacalcidol and other components of the drug.

To ensure normal absorption and reduce the risk of adverse reactions should strictly follow the recommendations for use and dosing.

Assign inside of 1 tab. (70 mg) once a week with a glass of water, at least 30 minutes before the first meal, drink or other medicines.They wash down only with ordinary water, since other beverages (including mineral water), food products, and some drugs may decrease the bioavailability of alendronic acid. pills can not be chewed or rassasyvat.

After taking the pill, the patient must maintain a vertical position (standing or sitting) for at least 30 minutes. You can not take a pill before bedtime or until the morning rise from the bed.

Dose adjustment is not required to elderly patients.

Assign the inside of 1 caps. (1 mcg) 1 time per day in the evening daily. Capsules should be swallowed whole, washed down with a sufficient amount of liquid.

The drug Tevabon intended for prolonged use.

From the musculoskeletal system: often - pain in the bones, muscles, joints, muscle cramps; rarely, osteonecrosis of the jaw, mainly in cancer patients,who took bisphosphonates, however, such cases were also observed in patients undergoing therapy for osteoporosis; unknown frequency - stress fracture of the proximal femur, associated or not associated with injury.

On the part of the metabolism: rarely - symptomatic hypocalcemia, usually associated with predisposing conditions, hypophosphatemia.

From the side of the central nervous system: often - a headache.

Other: rarely, transient symptoms similar to those in the acute phase of the disease (myalgia, malaise, and fever), usually at the beginning of treatment.

Metabolism: rarely - hypercalcemia; very rarely - a slight increase in the concentration of HDL in the blood plasma. In patients with severe impaired renal function, hyperphosphatemia may develop, heterotopic calcifications in the cornea and blood vessels.

From the side of the central nervous system: rarely - weakness, fatigue, dizziness, drowsiness.

When taken simultaneously with food, drinks containing calcium (including mineral water), food additives, antacids and other drugs for oral administration, absorption of alendronic acid may be impaired. In this regard, the interval between taking alendronic acid and other oral medications should be at least 30 minutes.

The combined use of alendronic acid (but not simultaneous use) with estrogen preparations is not accompanied by a change in their action and the development of side effects.

Oral intake of prednisolone is not accompanied by clinically significant changes in the bioavailability of alendronic acid.

GCS enhance the side effects of alendronic acid on the gastrointestinal tract.

With the simultaneous use of alfacalcidol with cardiac glycosides increases the risk of arrhythmias.

Inductors of liver microsomal enzymes (including phenytoin and phenobarbital) reduce, and inhibitors increase the concentration of alfacalcidol in plasma (possibly changing its effectiveness).

The absorption of alfacalcidol is reduced when it is combined with mineral oil (for a long time), Kolestiramine, Colestipol, sucralfate, antacids, and albumin-based preparations.

In this regard, do not take Alfacalcidol capsules simultaneously with antacids containing aluminum, the interval between taking these medicines should be at least 2 hours.

Alfacalcidol increases the absorption of phosphorus-containing drugs and the risk of hyperphosphatemia.

The simultaneous use of alfacalcidol with calcium preparations, thiazide diuretics can cause hypercalcemia, by increasing the absorption of calcium in the intestine, increasing its reabsorption in the kidneys.

During therapy with alfacalcidol, it is not necessary to prescribe other drugs of vitamin D and its derivatives due to the possible additive interaction and an increased risk of hypercalcemia.