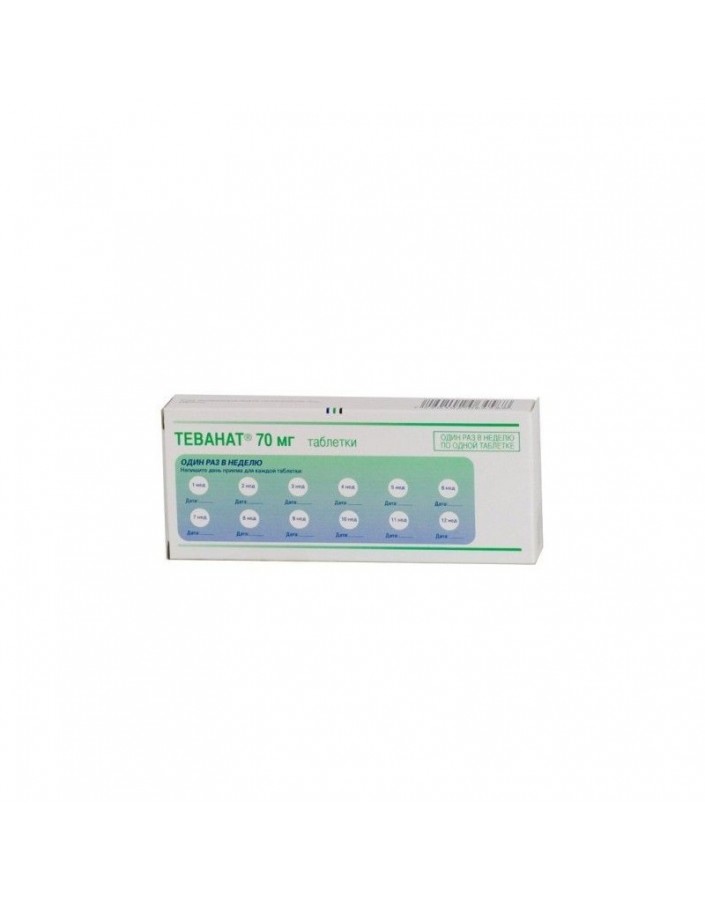 Tevanate is an inhibitor of bone resorption. It belongs to the group of aminobisphosphonates - synthetic analogues of pyrophosphate that binds to hydroxyapatite, which is part of the bone tissue. Increases the mineral density of the bones of the spine and other bones of the skeleton. The mechanism of antiresorbing action is associated with the suppression of the function of osteoclasts. Contributes to the formation of bone tissue with a normal histological structure.

- Treatment of postmenopausal osteoporosis.
- Osteoporosis caused by the use of corticosteroids.

- Hypocalcemia.
- States leading to slower movement of food through the esophagus (including strictures or achalasia of the esophagus).
- The inability of the patient to stand or sit upright for at least 30 minutes.
- Renal failure severe (creatinine clearance less than 35 ml / min).
- Severe mineral metabolism disorders.
- Childhood.
- Pregnancy.
- Lactation period (breastfeeding).
- Hypersensitivity to the drug.

With caution, due to the risk of irritation of the mucous membrane of the upper GI tract and the risk of aggravating the underlying disease, the drug should be used for gastrointestinal diseases in the acute phase (dysphagia, esophagitis, gastritis, duodenitis, peptic ulcer and duodenal ulcer), hypovitaminosis D.

To ensure the normal absorption of the drug and reduce the risk of adverse reactions should strictly follow the recommendations for use and dosage.

A pill is taken whole with a glass of water at least 30 minutes before the first meal, drink, or other medicines. The drug is washed down only with ordinary water, since other beverages (including mineral water), food products, and some medicines may decrease the bioavailability of alendronic acid. pills can not be chewed or rassasyvat.

After taking the drug, the patient must maintain a vertical position (standing or sitting) for at least 30 minutes. You can not take the drug at bedtime or until the morning rise from the bed.

The possibility of any signs of the occurrence of adverse reactions from the esophagus should be especially carefully controlled. The patient should be informed about the need to stop taking the drug and consult a doctor if you develop dysphagia, pain when swallowing, chest pain or heartburn.

It is necessary to inform the patient about the possible risk of damage to the mucous membrane of the esophagus if the instructions for use are not followed.

In patients with hypocalcemia, prior to the initiation of Tevanate, it is necessary to correct the disorders of mineral metabolism, including hypovitaminosis D. In the course of treatment, a slight asymptomatic decrease in serum Calcium and phosphate concentrations is possible due to the positive effect of alendronic acid on bone mineral density, which is of particular importance for patients receiving GCS because they may have reduced calcium absorption.

When taking Tevanate (especially with GCS) it is necessary to ensure adequate intake of calcium and vitamin D with food or in the form of drugs. The absorption of bisphosphonates is greatly reduced with simultaneous ingestion of food.

The drug does not affect the ability to drive vehicles and work with mechanisms.

The combined use of alendronic acid (but not simultaneous use) with estrogen preparations is not accompanied by a change in their action and the development of side effects.

Oral intake of prednisolone is not accompanied by clinically significant changes in the bioavailability of alendronic acid.

NSAIDs increase the side effect of alendronic acid on the gastrointestinal tract.

Symptoms: hypocalcemia, hypophosphatemia, diarrhea, heartburn, esophagitis, erosive and ulcerative lesions of the gastrointestinal tract are possible.
Treatment: taking milk or antacid to bind alendronic acid. Due to the risk of irritation of the esophagus should not induce vomiting. The patient should be in an upright position.