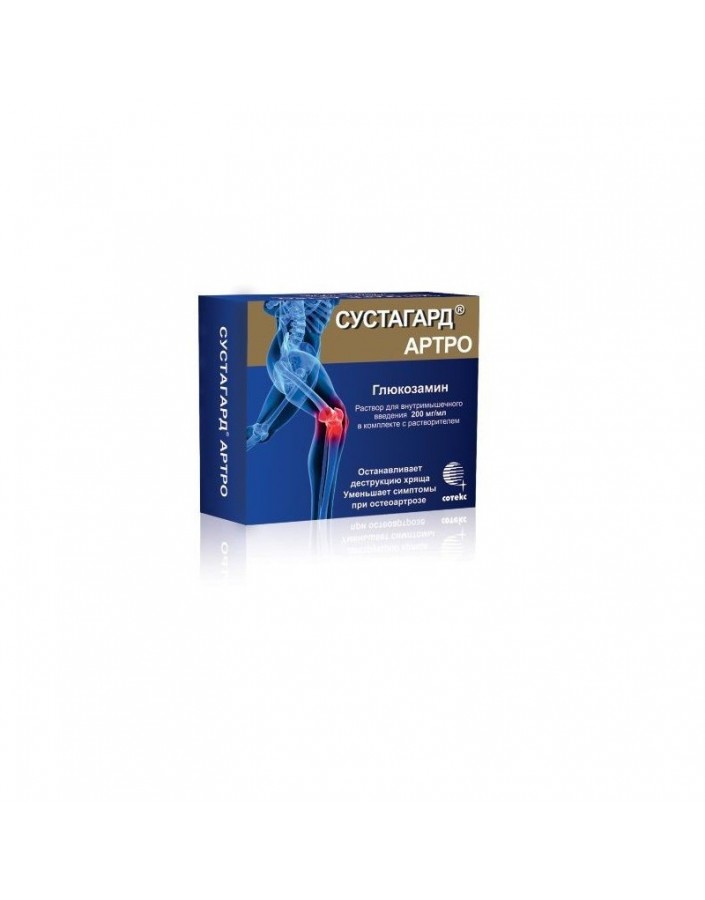 Ampoule A. One ampoule (2 ml) contains:

Ampoule A is a colorless or light yellow transparent liquid.

Pharmacodynamics. The drug stimulates the regeneration of cartilage tissue,

Glucosamine sulfate, the active component of the drug Sustagard® ARTRO,

is a salt of the natural aminosaccharide glucosamine, which is physiologically contained in the body. Glucosamine stimulates chondrocyte synthesis of proteoglycans (glycosaminoglycans and hyaluronic acid) of the synovial fluid;

inhibits enzymes (collagenase, phospholipase A2, etc.), causing the destruction of cartilage tissue; prevents the formation of superoxide radicals, inhibits the activity of lysosomal enzymes; initiates the process of sulfur fixation in the synthesis of Chondroitin sulfuric acid and contributes to the normal deposition of Calcium in the bone tissue; interferes with the damaging effect of corticosteroids on chondrocytes and impaired glycosaminoglycan synthesis induced by nonsteroidal anti-inflammatory drugs.

Sulfo groups are also involved in the synthesis of glycosaminoglycans and the metabolism of cartilage, and the side chain sulfoesters of proteoglycans, helping to retain water in maintaining the elasticity of the cartilage matrix.

Glucosamine sulfate stops the destruction of cartilage and reduces symptoms in osteoarthritis. Reduction of clinical symptoms usually occurs 2 weeks after the start of treatment, with continued clinical improvement within 8 weeks after discontinuation of the drug.

Hypersensitivity to glucosamine, Lidocaine and other components of the drug

Due to the content of lidocaine: cardiac conduction disturbances, acute heart failure, history of epileptiform convulsions, severe liver and kidney dysfunction; period of pregnancy and breastfeeding, children and adolescents up to 18 years.

Patients with chronic heart failure, arterial hypotension, the drug should be used with caution.

If you are intolerant to seafood (shrimp, shellfish), the likelihood of allergic reactions to the drug increases.

prone to malignant hyperthermia, therefore, in such cases, their use should be avoided. Special care should be taken when using the drug in patients with circulatory failure, hypotension, and impaired liver and / or kidney function. Caution should be exercised in the appointment of lidocaine in elderly patients with epilepsy, in violation of the conductivity of the heart, with respiratory failure.

Only for intramuscular application! The drug is not intended for intravenous administration.

Immediately before administration, mix the contents of ampoule A with ampoule B

(solvent) in one syringe. The prepared solution (3 ml) is injected intramuscularly.

Injections of the drug can be combined with the intake of glucosamine.

Local reactions:feeling of light burning (disappears with the development of anesthetic effect for 1 min), thrombophlebitis.

Because of the lidocaine contained in the drug, side reactions are possible that are characteristic of this component.on the part of the digestive system: nausea, vomiting;with side of the nervous system: numbness of tongue and oral mucosa, drowsiness, diplopia, headache, dizziness, tremor, euphoria, disorientation;from the side of cardio-vascular system: violation of cardiac conduction; allergic reactions:swelling, anaphylactic shock.

Disulfite, which is part of the sodium preparation, is capable in rare cases of causing severe hypersensitivity reactions and bronchospasm.

No cases of overdose have been identified.

numbness of the tongue and lips, agitation, anxiety, tinnitus, dizziness, blurred vision, tremor, depression, drowsiness. It is necessary to monitor the patient’s cardiovascular and respiratory functions. Changes in these parameters may indicate an overdose of the drug, so the patient should immediately provide oxygen. All complications require symptomatic treatment.

chlorpromazine, imipramine increase the level of lidocaine in the blood plasma, reducing its hepatic metabolism. With simultaneous use with class I antiarrhythmic drugs (including quinidine, procainamide, disopyramide)

AV blockade or ventricular fibrillation. When used simultaneously with sedatives, the sedative effect is enhanced. Phenytoin enhances the cardiodepressive effect of lidocaine. With simultaneous use with procainamide delusions, hallucinations are possible. Lidocaine can enhance the action of drugs that prejudice the blockade of neuromuscular transmission, since the latter reduce the conductivity of nerve impulses. Ethanol enhances the inhibitory effect of lidocaine on breathing.

One dose of the drug contains 40.8 mg of sodium. This should be considered when prescribing patients who are shown a strict salt-free diet.

Due to the fact that the lidocaine adjuvant is part of the injection form of the drug, before using it, it is necessary to conduct a skin test for individual sensitivity to the drug, which may be indicated by edema and redness of the injection site.

Influence on ability to manage transport by means and mechanisms

The effect of glucosamine on the ability to drive vehicles and mechanisms was not considered. It should be borne in mind that lidocaine is part of

which may have a temporary effect on motor ability and coordination. During treatment, care must be taken when driving and engaging in other potentially hazardous activities.