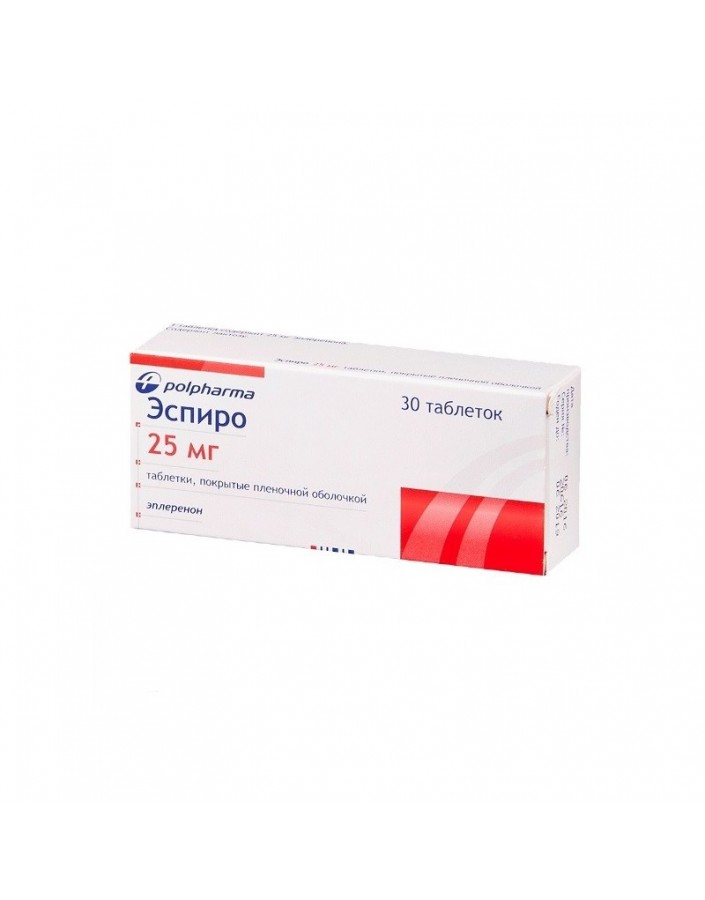 The binding of eplerenone to plasma proteins is about 50%, mainly due to binding to alpha 1-acid glycoproteins. The apparent volume of distribution in the equilibrium state is 50 (± 7) l. Eplerenone does not selectively bind to red blood cells.

Metabolism of eplerenone is carried out under the action of CYP3A4 isoenzyme cytochrome P-450. The active metabolites of eplerenone in human plasma have not been identified.

Less than 5% of the dose of eplerenone is excreted unchanged with urine and feces.

After a single oral dose of a radiolabeled drug, about 32% of the dose was excreted in the feces and about 67% in the urine.The elimination half-life in the phase of elimination of eplerenone is about 3 to 5 hours. Plasma clearance is about 10 l / h.

In patients with severe hepatic insufficiency, eplerenone has not been studied, so its use in this group of patients is contraindicated.

The clearance of eplerenone in patients with heart failure is similar to that in healthy individuals.

Eplerenone has a relative selectivity for mineralocorticoid receptors in humans compared to glucocorticoid,progesterone and androgen receptors, blocking their binding to aldosterone - the key hormone of the renin-angiotensin-aldosterone system (RAAS), which is involved in the regulation of blood pressure and the pathogenesis of cardiovascular diseases.

Eplerenone causes a persistent increase in plasma renin levels and serum aldosterone levels. Subsequently, renin secretion is inhibited by aldosterone via a feedback mechanism. However, an increase in renin activity or a level of circulating aldosterone does not affect the effects of eplerenone.

- as an additional means to standard therapy using beta-blockers, in order to reduce the risk of mortality and cardiovascular morbidity in patients with a stable clinical condition with left ventricular dysfunction (LVEF [left ventricular ejection fraction] ≤40%)

- To reduce the risk of mortality and cardiovascular morbidity in patients with clinical manifestations of heart failure after a recent myocardial infarction.

Espiro can be taken at the time or regardless of the meal. The recommended maintenance dose of Espiro is 50 mg once daily. The maximum daily dose is 50 mg.

Treatment should begin with a dose of 25 mg once a day and gradually increase it, preferably within 4 weeks, until the required dose of 50 mg is reached once a day, controlling the level of potassium in the blood serum (see Table 1). Usually, it is advisable to start Espiro treatment within 3-14 days after the diagnosis of myocardial infarction.

In chronic heart failure (NYHA class II), treatment begins with a dose of 25 mg once a day and gradually increases, preferably within 4 weeks, until the required dose of 50 mg is reached once a day, controlling the level of potassium in the blood serum (see Table 1).

Patients whose serum potassium concentration is

> 5.0 mmol / l, it is not recommended to start treatment Espiro

If Espiro is canceled due to an increase in serum potassium concentration ≥ 6.0 mmol / l, repeated use of the drug in a dose of 25 mg is possible every other day if the concentration of potassium in blood serum is less than 5.0 mmol / l.

Use in children and adolescents

There is no data on the use of eplerenone in children, so the use of a medicinal product in this group of patients is not recommended.

Use in the elderly

Correction of the initial dose for the elderly is not required. Due to age-related impairment of renal function, the risk of hyperkalemia in older people is higher. It may additionally increase due to comorbidities that increase the concentration of the drug product in the body, especially mild or moderate liver dysfunction. It is recommended to periodically monitor the level of potassium in the serum.

Use in patients with renal failure

Correction of the initial dose in patients with mild renal impairment is not required. It is recommended to periodically monitor the level of potassium in the serum.

Eplerenone is not removed by dialysis.

Use in patients with liver failure

Adjustment of the initial dose in patients with mild or moderate liver dysfunction is not required. Considering the increase in the concentration of eplerenone in the body of such patients, it is recommended to frequently and regularly monitor the concentration of potassium in the blood serum, especially in elderly patients.

Use in patients taking other medications

With the simultaneous use of mild or moderate inhibitors of CYP3A4, for example, Amiodarone, diltiazem and Verapamil, treatment should be started with a dose of 25 mg once a day.The dose should not exceed 25 mg once a day.

- Thrombosis of the arteries of the lower extremities, orthostatic hypotension

- back pain, painful cramps of the gastrocnemius muscles

- hypersensitivity to eplerenone or any excipient of the drug

The interaction of Espiro with lithium has not been studied, but there have been cases of intoxication of lithium in patients receiving diuretics and angiotensin-converting enzyme inhibitors at the same time. Avoid simultaneous use of Espiro and lithium. If such treatment is necessary, plasma levels of lithium should be monitored.

Cyclosporine and tacrolimus can lead to impaired renal function and increase the risk of hyperkalemia. The simultaneous use of espiro and cyclosporine or tacrolimus should be avoided. If necessary, the appointment of such treatment is recommended to carefully monitor the level of potassium in the serum and kidney function.

Treatment of NSAIDs can lead to acute renal failure caused by the direct effect of these drugs on glomerular filtration, especially in patients from risk groups (elderly patients and (or) dehydrated patients).Patients receiving Espiro and NSAIDs must be adequately hydrated, they need to be monitored for kidney function before starting treatment.

The simultaneous use of trimethoprim and Espiro increases the risk of hyperkalemia. It is necessary to control the level of potassium in the blood serum and kidney function, especially in patients with renal insufficiency and the elderly.

Caution should be exercised while using Espiro and ACE inhibitors or angiotensin II receptor antagonists. The combination of Espiro with these drugs may increase the risk of developing hyperkalemia in patients at risk of impaired renal function, such as the elderly. Recommended careful monitoring of serum potassium and kidney function.

The simultaneous use of these drugs with Espiro can increase the hypotensive effect and the risk of orthostatic hypotension.

The simultaneous use of these drugs with Espiro can lead to a weakening of the antihypertensive effect (sodium and fluid retention).

The concentration of Digoxin in the body (AUC) with simultaneous use with Espiro increases by 16% (90% confidence interval: 4% - 30%). Care must be taken during the use of digoxin in doses close to the upper limit of the therapeutic range.

Clinically significant pharmacokinetic interactions with Warfarin were not detected. Care must be taken when applying warfarin in doses close to the upper limit of the therapeutic range.

The results of pharmacokinetic studies with CYP3A4 test substrates, i.e. midazolam and cisapride showed no evidence of significant pharmacokinetic interactions when used concurrently with Espiro.

Weak or moderate inhibitors of CYP3A4: The simultaneous use of Espiro with Erythromycin, saquinavir, amiodarone, diltiazem, verapamil and Fluconazole caused significant pharmacokinetic interactions, manifested by an increase in Espiro AUC of 98 - 187%.The daily dose of Espiro with simultaneous use of mild or moderate inhibitors of CYP3A4 should not exceed 25 mg.

The simultaneous intake of Hypericum tincture (a powerful inductor CYP3A4) with Espiro caused a 30% decrease in the AUC of the latter. When using more potent inducers of CYP3A4, such as rifampicin, a more pronounced decrease in AUC of Espiro is possible. Given the possible decrease in the effectiveness of Espiro, the simultaneous use of powerful inducers of CYP3A4 (rifampicin, Carbamazepine, phenytoin, phenobarbital, St. John's wort tincture) and Espiro is not recommended.

Antacids: Based on the results of a pharmacokinetic clinical study of significant interactions of antacids with Espiro, with their simultaneous use is not expected.

In patients with impaired renal function, including diabetic microalbuminuria, it is recommended to regularly monitor the concentration of potassium in the blood serum. The risk of developing hyperkalemia increases with a decrease in renal function. Espiro is not removed by hemodialysis.

In patients with mild or moderate liver dysfunction (class A and B on the Child-Pugh scale), no increase in serum potassium concentration of more than 5.5 mmol / l was detected. In such patients, the level of electrolytes should be monitored. In patients with severely impaired liver function, the use of Espiro has not been studied, so its use is contraindicated.

Tablets contain lactose, so they should not be prescribed to patients with rare hereditary intolerance to galactose, Lapp's lactase deficiency or glucose-galactose malabsorption syndrome.

Research on the use of Espiro during pregnancy and lactation has not been conducted. If it is necessary to use the drug, the doctor decides about his appointment, when the expected benefit to the mother greatly exceeds the possible risk to the fetus / child. Prescribing eplerenone to pregnant women should be wary.

Breastfeeding: It is not known whether eplerenone is excreted in breast milk after ingestion. Given that the possible adverse effects on a newborn who are breastfeeding are unknown, it is necessary to consider the feasibility of stopping breastfeeding or discontinuation of the drug, depending on the importance of its use for the patient.

Data on the effect of Espiro on the ability to drive and maintain moving machinery is not available. Eplerenone does not cause drowsiness or impairment of cognitive functions, but when driving or maintaining machinery it is necessary to take into account the possibility of dizziness during treatment.

Cases of overdose espiro not described.

Treatment: the appointment of Activated carbon and symptomatic therapy. Hemodialysis is not effective.

On 10 or 14 tablets in a blister strip packaging from a film of polyvinyl chloride or PVDC and aluminum foil.