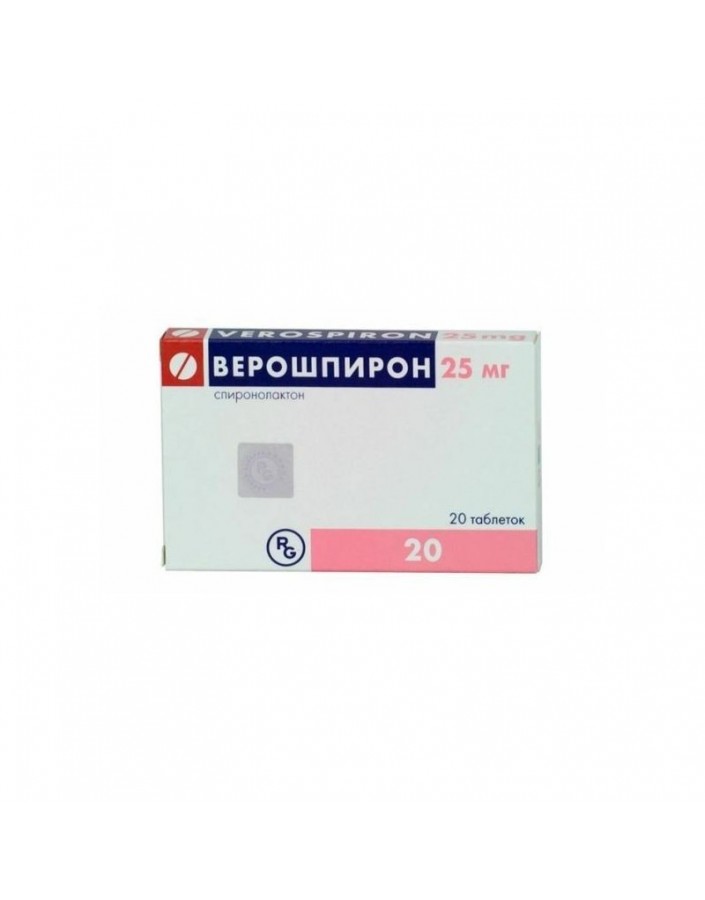 In a blister pack of 10 tablets. In a cardboard bundle 2 packs.

Veroshpilakton - spironolactone is a potassium-sparing diuretic, a specific antagonist of aldosterone with prolonged action (mineralocorticosteroid hormone of the adrenal cortex).

In the distal parts of the nephron, spironolactone prevents aldosterone from retaining sodium and water and inhibits the potassium-excreting effect of aldosterone, reduces the synthesis of permeases in the aldosterone-dependent portion of the collecting tubules and distal tubules.

The maximum effect is observed 7 hours after taking Veroshpilakton inside and lasts at least 24 hours.

The hypotensive effect of the drug Veroshpilakton is due to the presence of a diuretic effect, which is not constant: the diuretic effect is manifested at 2-5 days of treatment.

- Essential hypertension (as part of combination therapy).
- Edematous syndrome in chronic heart failure (can be used as monotherapy and in combination with standard therapy).
- Conditions in which secondary hyperaldosteronism can be detected, including cirrhosis of the liver, accompanied by ascites and / or edema, nephrotic syndrome, and other conditions accompanied by edema.
- Hypokalemia / hypomagnesaemia (as an aid to its prevention during treatment with diuretics and with the inability to use other methods of correcting the level of potassium).
- Primary hyper aldosteronism (Conn syndrome) - for a short preoperative course of treatment.
- To establish the diagnosis of primary hyperaldosteronism.

- Hypersensitivity to any of the components of the drug Veroshpilakton.
- Addison's disease.
- Hyperkalemia.
- Hyponatremia.
- Severe renal failure (creatinine clearance less than 10 ml / min).
- Anuria.
- Pregnancy.
- The period of breastfeeding.
- Children's age (up to 3 years), due to the solid dosage form.

Veroshpilakton is contraindicated in pregnancy and lactation.

- With essential hypertension. The daily dose of Veroshpilakton for adults is usually 50-100 mg once and can be increased to 200 mg, while increasing the dose gradually, 1 time per 2 weeks. In order to achieve an adequate response to therapy, the drug Veroshpilakton must be taken at least 2 weeks. If necessary, carry out dose adjustment.

- With severe hyperaldosteronism and hypokalemia 300 mg / day. (maximum 400 mg) in 2-3 doses, while improving the condition, the dose of Veroshpilakton is gradually reduced to 25 mg / day.

- Hypokalemia / Hypomagnesemia With hypokalemia and / or hypomagnesemia caused by diuretic therapy, the drug is prescribed in a dose of 25-100 mg / day, once or in several doses. The maximum daily dose of 400 mg, if oral potassium preparations or other methods to compensate for its deficiency are ineffective.

- Diagnosis and treatment of primary hyperaldosteronism
- As a diagnostic tool with a short diagnostic test For 4 days at 400 mg / day, distributed into several doses per day. With an increase in the concentration of potassium in the blood while taking the drug Veroshpilakton and a decrease after its cancellation, it is possible to assume the presence of primary hyper aldosteronism.

- With long-term diagnostic test In the same dose for 3-4 weeks. When correction of hypokalemia and arterial hypertension is achieved, one can assume the presence of primary hyper aldosteronism.

- Short course of preoperative treatment of primary hyper aldosteronism Once the diagnosis of hyper aldosteronism has been established using more accurate diagnostic methods. Veroshpilakton should be taken at 100-400 mg / day, divided into 1-4 doses per day during the entire period of preparation for surgery. If the operation is not indicated, Veroshpilakton is used for long-term maintenance therapy, using the smallest effective dose, which is selected individually for each patient.

- Edema against nephrotic syndrome. The daily dose for adults is usually 100-200 mg / day. No influence of Veroshpilakton on the main pathological process has been identified, and therefore the use of this drug is recommended only in cases when other types of therapy are ineffective.

- With edema syndrome against the background of chronic heart failure Every day, for 5 days, 100-200 mg / day in 2-3 doses, in combination with a "loop" or thiazide diuretic. Depending on the effect, the daily dose is reduced to 25 mg. Maintenance dose is adjusted individually. The maximum dose of 200 mg / day.

- From the side of the hematopoietic system Leukopenia (including agranulocytosis), thrombocytopenia.

- On the part of the endocrine system, the coarseness of the voice, in men - gynecomastia (the likelihood of development depends on the dose, the duration of treatment and, usually, is reversible); decrease in potency and erection, in women - menstrual disorders: dysmenorrhea, amenorrhea, metrorrhagia in menopause, hirsutism, pain in the area of ​​the mammary glands, carcinoma of the mammary gland (no connection with the administration of the drug has been established).

- From the side of the skin Alopecia, hypertrichosis.

- On the part of the musculoskeletal system Cramps of the gastrocnemius muscles.

Perhaps a temporary increase in the level of urea nitrogen in the blood serum, especially with reduced kidney function and hyperkalemia.

In cases of kidney and liver diseases, as well as in old age, regular monitoring of serum electrolytes and kidney function is necessary.

The drug Veroshpilakton makes it difficult to determine Digoxin , cortisol and adrenaline in the blood. Despite the absence of a direct effect on carbohydrate metabolism, the presence of diabetes mellitus, especially with diabetic nephropathy, requires special care because of the possibility of the development of hyperkalemia.

In the treatment of nonsteroidal anti-inflammatory drugs, kidney function and electrolyte levels in the blood should be monitored.

Foods rich in potassium should be avoided.

During treatment, alcohol is contraindicated.

- The influence of the drug Veroshpilakton on the ability to drive a car and mechanisms whose work is associated with an increased risk of injury In the initial period of treatment it is forbidden to drive a car and engage in activities requiring increased concentration of attention and psychomotor reactions. The duration of the restrictions is set individually.

Enhances the metabolism of phenazole (antipyrine).

Reduces the sensitivity of vessels to norepinephrine (requires caution when conducting anesthesia), increases the half-life of digoxin - possible intoxication with digoxin. Enhances the toxic effect of lithium due to reduced clearance. Accelerates metabolism and elimination of carbenoxolone. Carbenoxolone contributes to the retention of sodium by spironolactone.

Nonsteroidal anti-inflammatory drugs reduce the diuretic and natriuretic effects,increases the risk of hyperkalemia.

Glucocorticosteroid drugs increase the diuretic and natriuretic effect in hypoalbuminemia and / or hyponatremia.

- Symptoms: nausea, vomiting, dizziness, diarrhea, skin rash, hyperkalemia (paresthesias, muscle weakness, arrhythmias), hyponatremia (dry mouth, thirst, drowsiness) hypercalcemia, dehydration, increased urea concentration.
- Treatment: gastric lavage, symptomatic treatment of dehydration and arterial hypotension. In case of hyperkalemia, it is necessary to normalize water-electrolyte metabolism with the help of potassium-withdrawing diuretics, rapid parenteral administration of a 5-20% dextrose solution with insulin at the rate of 0.25-0.5 U per 1 g of dextrose; if necessary, you can re-enter. In severe cases, hemodialysis is performed.