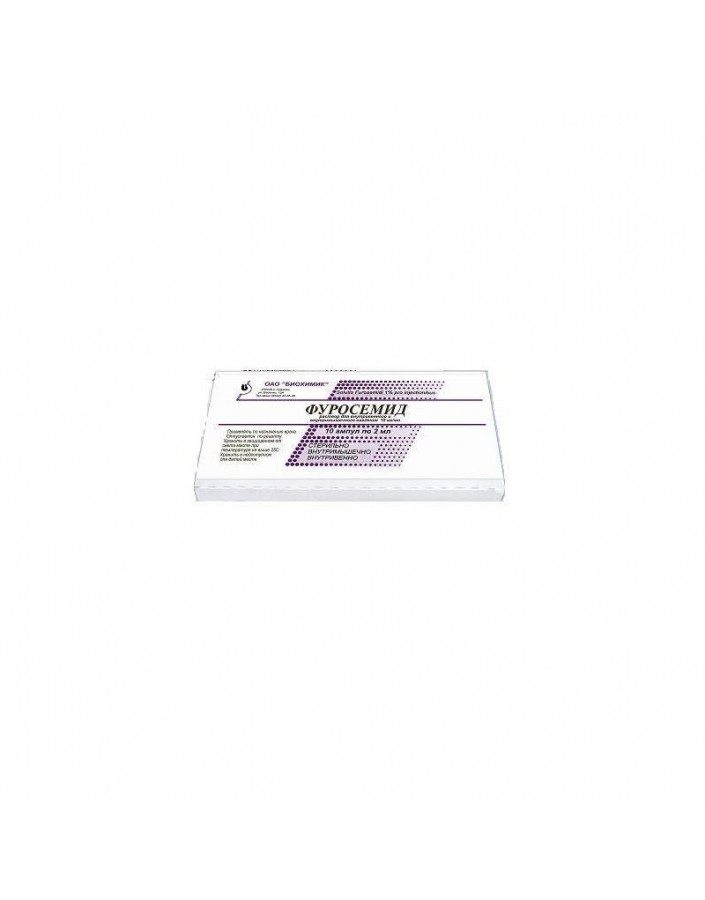 Furosemide is a potent diuretic with a rapidly developing effect. Violates the reabsorption of sodium ions, chlorine in a thick segment of the ascending part of the loop of Henle. In addition, increases the excretion of ions of potassium, Calcium, Magnesium.

- renal failure with anuria;
- hepatic coma and precoma;
- violations of water-salt metabolism: hypokalemia, hyponatremia, hypovolemia (including hypotension) or dehydration;
- I and II trimesters of pregnancy;
- hypersensitivity to sulfonamides.

Furosemide is contraindicated for use in the I and II trimesters of pregnancy.In the third trimester, its use is possible only under strict indications and for a short period.
If necessary, the use of furosemide during lactation should stop breastfeeding due to the fact that furosemide is excreted in breast milk and suppresses lactation.

With caution, the drug is prescribed for severe cardiovascular insufficiency, with prolonged therapy with cardiac glycosides, as well as in elderly patients with severe atherosclerosis. Prior to treatment, serious disturbances in water and electrolyte balance should be compensated.
Control of laboratory parameters
During treatment, the level of electrolytes, carbonates, urea should be regularly monitored (especially when using doses higher than 80 mg).
Influence on ability to drive motor transport and control mechanisms
The question of the possibility of practicing potentially hazardous activities that require increased attention and quickness of psychomotor reactions should be addressed after evaluating the patient's individual response, in connection with a possible decrease in the ability to concentrate.

Symptoms: dehydration, reduction of BCC, arterial hypotension, disturbances of water and electrolyte balance, hypokalemia and hypochloremic alkalosis due to diuretic effect.
Treatment: conduct symptomatic therapy. There is no specific antidote.

The drug should be stored in a dry, dark place at temperatures not above 25 ° C.