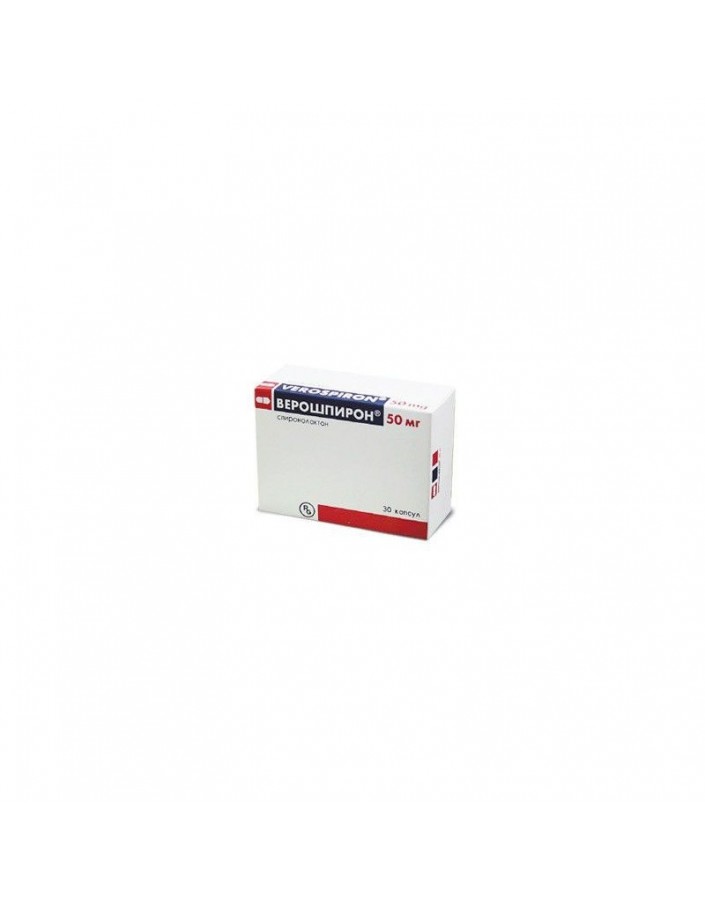 Verospiron - potassium-sparing diuretic. As an aldosterone antagonist, it is competitively associated with aldosterone receptors in the distal renal tubules. The drug increases the excretion of sodium ions and water, while reducing the excretion of potassium and Magnesium ions.
The diuretic effect develops at 2-5 days of treatment and persists for 2-3 days after discontinuation of the drug Verospiron.

Verospiron is contraindicated for use during pregnancy and during breastfeeding.

When taking Veroshpirona, you should exclude or limit the consumption of foods rich in potassium (potatoes, apricots, raisins, tomato juice), as well as other potassium-containing drugs.
In connection with the possibility of the development of hyperkalemia, hyponatremia and transient increase of blood urea nitrogen during the use of the drug, it is necessary to periodically monitor the content of electrolytes in the serum, especially in elderly patients with reduced kidney or liver function.
Patients should be informed that if the next dose was missed, the next dose should be taken as soon as possible. Do not double the missed dose.
Some patients with decompensated cirrhosis have reported the development of reversible hypochloremic metabolic acidosis, usually accompanying hyperkalemia (even with normal kidney function).
During the treatment Veroshpironom should avoid alcohol.
Influence on ability to drive motor transport and control mechanisms
In the initial period of use of the drug Verospiron prohibited driving a car and other activities,requiring speed psychomotor reactions. In the future, the possibility of practicing these types of activities is determined individually.

Symptoms: nausea, vomiting, drowsiness, confusion, skin rash, diarrhea. Possible violation of water and electrolyte balance and dehydration.
Treatment: Immediately stop taking Verospiron, induce vomiting and flush the stomach. There is no specific antidote. Symptomatic therapy of dehydration, disturbances of water and electrolyte balance, arterial hypotension should be carried out. The elimination of hyperkalemia is achieved by the rapid introduction of glucose (20-50% solutions) and insulin at the rate of 0.25-0.5 IU per 1 g of glucose. Potassium diuretics and ion exchange resins are used. Hemodialysis is possible.

Verospiron reduces the sensitivity of vessels to norepinephrine. This should be considered during general and local anesthesia.
With the simultaneous use of Verospiron with other diuretic or antihypertensive agents, it is possible to enhance the hypotensive effect (if necessary, combination therapy is necessary to reduce the dose of the above drugs).
The combined use of Veroshpirone in high doses with Indomethacin or ACE inhibitors can lead to hyperkalemia.
With simultaneous use Verospiron reduces the effect of indirect anticoagulants (coumarin derivatives).
With simultaneous use of Verospiron with triptorelin, Buserelin, gonadorelin increases the effect of the latter.
Pharmacokinetic interaction
With simultaneous use of Verospiron and Digoxin increases T1/2 last one. This can lead to an increase in the concentration of digoxin in the blood up to toxic (if necessary, their joint use should reduce the dose or increase the interval between doses of digoxin).
When applied simultaneously with Verohspiron, Acetylsalicylic acid weakens the diuretic effect of spironolactone by blocking the secretion of canrenone in the renal tubules.
Indomethacin and mefanamic acid have been shown to inhibit canrenone excretion.

The drug Verospiron should be stored in a dark place at a temperature of from 15 ° to 30 ° C.