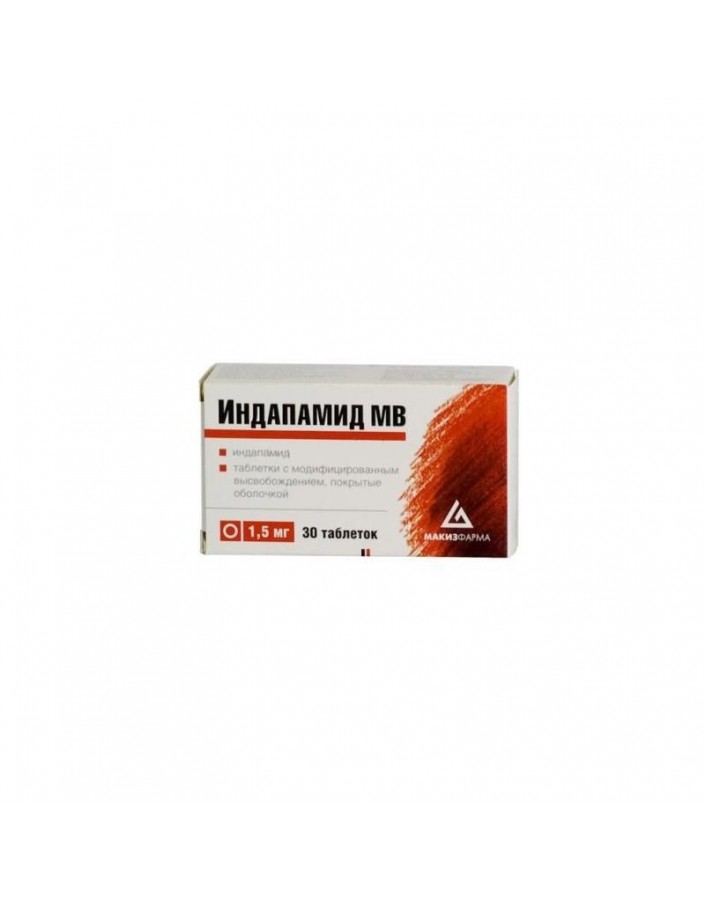 Indapamide MB - diuretic, antihypertensive drug. Pharmacologically similar to thiazide diuretics (mechanism of action is associated with impaired sodium reabsorption in the cortical segment of the loop of Henle). Increases urinary excretion of sodium and chlorine ions, and to a lesser extent - potassium and magnesium ions. Possessing the ability to selectively block slow Calcium channels, it increases the elasticity of the artery walls and lowers the round fist. Helps to reduce left ventricular hypertrophy. Does not affect the content of lipids in the blood plasma (TG, LDL, HDL) and carbohydrate metabolism (including in patients with concomitant diabetes). Reduces the sensitivity of the vascular wall to norepinephrine (noradrenaline) and angiotensin II, stimulates the synthesis of prostaglandin E2, reduces the production of free and stable oxygen radicals.

The antihypertensive effect persists for 24 hours when the drug is taken 1 time / day, the optimal therapeutic effect develops by the end of the first week of administration.

Tablets are taken orally, without chewing, with a sufficient amount of liquid.
Daily dose Indapamide MB is 1.5 mg (1 tab.) 1 time / day (in the morning).

WITH caution prescribe the drug for violations of the liver and / or kidneys, impaired water and electrolyte balance, hyperparathyroidism, patients with an increased QT interval on the ECG or receiving combined therapy, diabetes mellitus in the stage of decompensation, hyperuricemia (especially accompanied by gout and urate nephrolithiasis).

When prescribing the drug to patients taking cardiac glycosides, laxative drugs on the background of hyper aldosteronism, as well as elderly people, regular monitoring of the content of potassium ions and creatinine level is shown.

The most careful control is shown in patients with cirrhosis of the liver (especially with edema or ascites because of the risk of developing metabolic alkalosis, which intensifies the manifestations of hepatic encephalopathy), as well as in IHD,heart failure and the elderly. Patients with an increased QT interval on an ECG (congenital or developed on the background of any pathological process) also belong to an increased risk group. The first determination of the concentration of potassium ions in the blood should be carried out during the first week of use of the drug.

Hypercalcemia with indapamide may be due to previously undiagnosed hyperparathyroidism.

In patients with diabetes, it is extremely important to control the level of glucose in the blood, especially in the presence of hypokalemia.

Significant dehydration can lead to the development of acute renal failure (reduced glomerular filtration). Patients need to compensate for the loss of water and at the beginning of treatment carefully monitor kidney function.

Indapamide can give a positive result during the doping control.

When prescribing indapamide, it should be borne in mind that sulfonamide derivatives can aggravate the course of systemic lupus erythematosus.

Store in a dry, protected from light and out of reach of children at a temperature not exceeding 25 ° C.