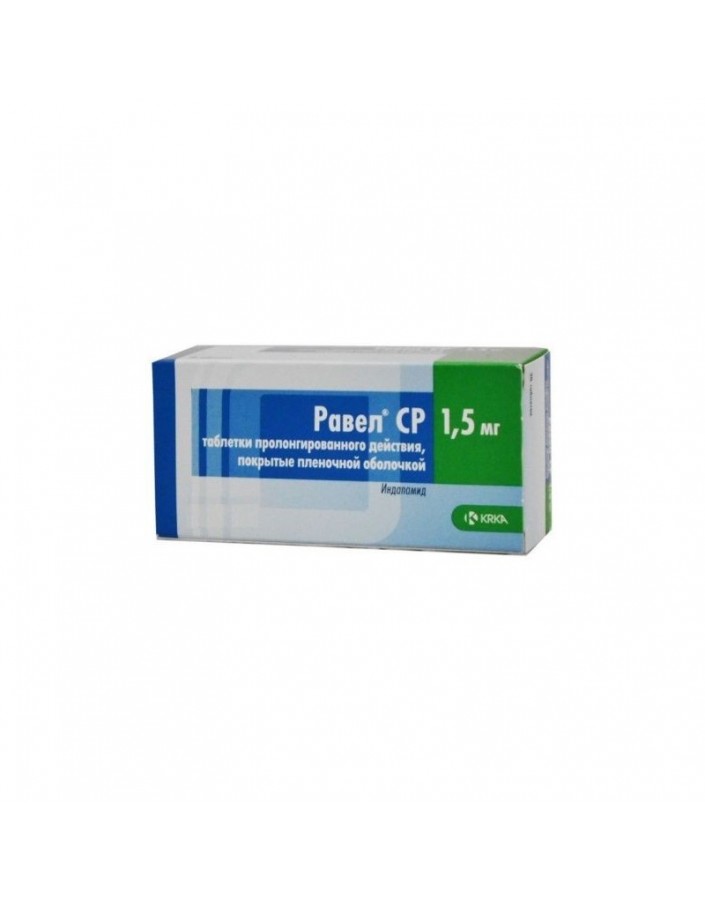 Ravel CP - diuretic. Antihypertensive drug. Indapamide is a derivative of sulfonamide and is pharmacologically similar to thiazide diuretics.
Indapamide disrupts the reabsorption of sodium ions in the cortical segment of the renal tubules, which increases the excretion of sodium ions and chlorine with urine, and leads to increased diuresis. To a lesser extent, the drug increases the excretion of potassium and magnesium ions.
In addition to the diuretic effect, indapamide has an effect on vascular tone, manifested in a decrease in arteriolar and total peripheral resistance.
Indapamide has an antihypertensive effect in doses that do not have a pronounced diuretic effect. In high doses, it does not affect the degree of blood pressure reduction, despite an increase in diuresis.
Indapamide, like other thiazide diuretics, reduces left ventricular hypertrophy.
In therapeutic doses, virtually no effect on lipid and carbohydrate metabolism.

- renal failure severe (stage anuria);
- severe liver failure (including with encephalopathy);
- hypokalemia;
- simultaneous administration of drugs that prolong the QT interval;
- children's and teenage age up to 18 years;
- hypersensitivity to any component of the drug and other sulfonamide derivatives.
with caution prescribe the drug for diabetes, impaired renal function and / or liver, disorders of water and electrolyte balance, hyperparathyroidism, prolongation of the QT interval on the ECG, hyperuricemia (especially manifested by gout or urate nephrolithiasis).

The appointment of Ravel CP during pregnancy is not recommended. The use of the drug can cause placental ischemia with the risk of slowing the development of the fetus.
It is not recommended to use the drug during lactation (breastfeeding), because indapamide is excreted in breast milk.

The drug is taken orally, 1.5 mg (1 tab.) 1 time / day, preferably in the morning, with a sufficient amount of liquid.

In violation of the function of the liver, Ravel CP may cause hepatic encephalopathy. When it occurs, the drug should be immediately discontinued.
Admission Ravel CP can cause hyponatremia, in some cases accompanied by serious consequences. The level of sodium in the blood plasma is measured prior to the start of treatment, and then during treatment at regular intervals. Initially, a drop in sodium plasma levels may be asymptomatic, so regular monitoring is important. In older patients and patients with cirrhosis, monitoring should be even more frequent. While taking the drug may develop hypokalemia.Careful and regular monitoring of potassium to prevent the development of hypokalemia (potassium content less than 3.4 mmol / l) should be carried out in patients at risk, such as debilitated patients and / or taking several drugs at the same time, elderly patients, patients with cirrhosis, peripheral swelling and ascites, ischemic heart disease and heart failure. In these patients, hypokalemia increases the toxic effect of cardiac glycosides and the risk of arrhythmias.
Patients with a prolonged QT interval on an ECG, regardless of the cause, congenital or induced by drugs, are also at increased risk. Hypokalemia (as well as bradycardia) is a predisposing factor for the occurrence of severe arrhythmias, especially potentially dangerous types of "pirouette".
All of these patients require more frequent monitoring of plasma potassium concentrations. The first measurement of potassium plasma concentration should be carried out during the first week of treatment. If a low potassium level is detected, a correction is required.
Control of blood glucose is important in patients with diabetes, especially in the presence of hypokalemia.
In patients with hyperuricemia, the frequency of gouty attacks may increase.
Thiazide and thiazide-like diuretics are fully effective only with normal or slightly reduced (CC in adults below 25 mg / l or 220 mcmol / l) of renal function.In elderly patients, the plasma creatinine level may vary depending on age, body weight and gender.
Secondary hypovolemia due to loss of water and sodium, induced by diuretics at the beginning of treatment, causes a decrease in glomerular filtration. This can lead to an increase in urea and creatinine levels in the blood plasma. If the patient’s renal function is not impaired, then this transient functional renal failure usually passes without consequences, but can worsen an already existing renal failure.
Taking Ravel CP can cause a positive reaction in doping control.
Use in pediatrics
Efficacy and safety of the drug in children have not been established.
Influence on ability to drive motor transport and control mechanisms
In some cases, individual reactions are possible associated with changes in blood pressure, especially at the beginning of treatment or with the addition of another antihypertensive agent. As a result, the ability to drive and work with machinery may be reduced.

When combined, indapamide increases the concentration of lithium in the plasma (by reducing urinary excretion) and increases the likelihood of nephrotoxic reactions (careful monitoring of the concentration of lithium in the blood plasma and dose adjustment is necessary).
The combined use of Ravel CP with astemizole, Erythromycin bepredinom (for iv administration), halofantrin,pentamidine, sultopride, terfenadine, vincamine, antiarrhythmics IA class (quinidine, disopyramide) and III-class (amiodarone, bretylium tosylate, sotalol) can lead to the development of type arrhythmia "pirouette" (predisposing factors include hypokalemia, bradycardia, and the foregoing lengthening QT interval).
When Ravel SR is combined with NSAIDs (with their systemic appointment), there is a risk of acute renal failure in patients with hypovolemia (due to a decrease in the glomerular filtration rate). It is necessary to compensate for the loss of fluid and at the beginning of treatment to monitor renal function.
With simultaneous use of Ravel CP with amphotericin B (for iv administration); gluco-and mineralocorticoid (for systemic use), tetrakozaktidom, laxatives that stimulate intestinal motility, cardiac glycosides - increases the risk of hypokalemia (additive effect). It is necessary to control the level of potassium in the blood plasma, ECG, if necessary - the appointment of appropriate therapy.
The combined use of Ravel CP with Baclofen can lead to increased antihypertensive effect.
Tricyclic antidepressants and neuroleptics increase the antihypertensive effect of indapamide and increase the risk of orthostatic hypotension (additive effect).
When combined with indapamide, ACE inhibitors increase the risk of arterial hypotension.
The combined use of Ravel CP with cyclosporine leads to an increase in plasma creatinine concentration, with an unchanged concentration of circulating cyclosporine.
Indapamide increases the risk of kidney dysfunction when using iodine-containing radiopaque drugs in high doses (dehydration). Before using iodine-containing contrast medicines, patients need to restore fluid loss.
The combined use of Ravel CP with drugs containing Calcium, leads to an increase in the concentration of calcium ions in the blood plasma due to a decrease in urinary excretion.
The combination of indapamide with potassium-sparing diuretics (amiloride, spironolactone, triamterene) can lead to the development of hypo-or hyperkalemia, especially in patients with diabetes and kidney dysfunction.

Symptoms: water and electrolyte disturbances (hyponatremia, hypokalemia), manifested in the form of nausea, vomiting, lower blood pressure, seizures, dizziness, drowsiness, lethargy, polyuria or oluguria, up to anuria (due to hypovolemia).
Treatment: gastric lavage, the appointment of Activated carbon, correction of water and electrolyte balance, symptomatic therapy. There is no specific antidote.