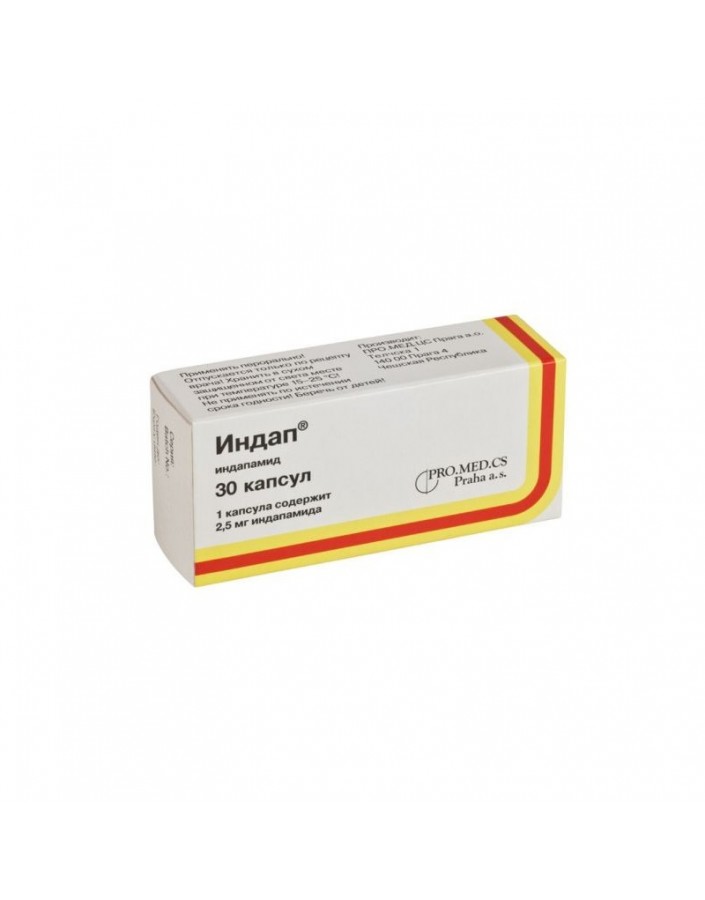 Indapamide - diuretic, antihypertensive drug. It causes a decrease in the smooth muscle tone of the arteries, a decrease in OPSS, and also has moderate saluretic activity due to impaired reabsorption of sodium ions, chlorine and water in the cortical segment of the loop of Henle and the proximal convolution of the nephron tubule. The decrease in OPSS is due to several mechanisms: a decrease in the sensitivity of the vascular wall to noradrenaline and angiotensin II; increased synthesis of prostaglandins with vasodilating activity; by inhibiting the influx of Calcium ions into the smooth muscle elements of the vascular wall. In therapeutic doses, virtually no effect on lipid and carbohydrate metabolism.
The hypotensive effect manifests itself only with initially elevated blood pressure, develops by the end of the first week and reaches a maximum after 3 months of systematic administration.

Tablets are ingested 2.5 mg 1 time / day (in the morning). With insufficient severity of the hypotensive effect after 2 weeks of treatment, the dose is increased to 5-7.5 mg / day.
Maximum dose: 10 mg / day in 2 divided doses (in the morning).

Acute violation of cerebral circulation, pronounced dysfunction of the kidneys and / or liver, severe diabetes and gout, hypersensitivity to Indapamide. Pregnancy and lactation.

Carefully used in patients with diabetes mellitus (requires glucose control, especially in the presence of hypokalemia), gout (an increase in the number of seizures is possible), in patients with indications of a history of allergic reactions to sulfonamide derivatives.
During treatment, it is necessary to control the level of electrolytes in the blood plasma (potassium, sodium, calcium).

When prescribing the drug to patients taking cardiac glycosides, laxative drugs on the background of hyper aldosteronism, as well as elderly people, regular monitoring of the content of potassium ions and creatinine level is shown.

The most careful control is indicated for patients with cirrhosis of the liver (especially with edema or ascites because of the risk of developing metabolic alkalosis, which intensifies the manifestations of hepatic encephalopathy), as well as in ischemic heart disease, heart failure and the elderly. Patients with an increased QT interval on an ECG (congenital or developed on the background of any pathological process) also belong to an increased risk group. The first determination of the concentration of potassium ions in the blood should be carried out during the first week of use of the drug.

Hypercalcemia with indapamide may be due to previously undiagnosed hyperparathyroidism.

In patients with diabetes, it is extremely important to control the level of glucose in the blood, especially in the presence of hypokalemia.

Significant dehydration can lead to the development of acute renal failure (reduced glomerular filtration). Patients need to compensate for the loss of water and at the beginning of treatment carefully monitor kidney function.

Indapamide can give a positive result during the doping control.

When prescribing indapamide, it should be borne in mind that sulfonamide derivatives can aggravate the course of systemic lupus erythematosus.

Store in a dry, protected from light and out of reach of children at a temperature not exceeding 25 ° C.