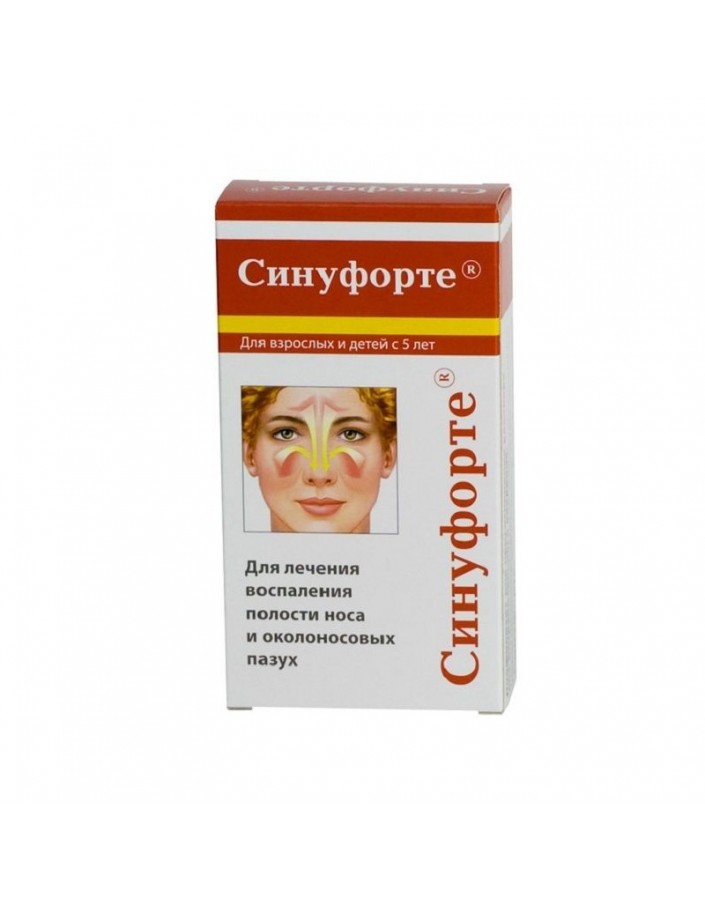 Lyophilisate for solution for intranasal administration

SINUFORTE is a herbal medicine for the treatment of inflammatory diseases of the paranasal sinuses and nasal cavity.

Cyclamen extract enhances secretion in the paranasal sinuses, helps to dilute the secret, has a local anti-edema effect.

The drug acts on the sensitive endings of the trigeminal nerve, located in the middle part of the nasal passage, thus causing a reflex separation of the secret (mucopurulent secretions). The effect is observed immediately after the introduction of the solution into the nasal cavity and lasts from thirty minutes to an hour. Simultaneously with the increased secretion, a discharge of the discharge occurs, which, in combination with the anti-edema effect, promotes the excretion of secretions from the paranasal sinuses into the nasopharynx. The use of Sinuforte enhances microcirculation in the mucous membranes of the nose and sinuses, which is associated with the reflex expansion of blood vessels suitable for the mucus secreting glands. This effect is due to the presence in the extract of cyclamen of a whole complex of active substances, the most studied of which are saponins. It is not possible to study the pharmacokinetics of the whole complex of active substances, therefore, no metabolites of the drug were detected.

Sinuforte is indicated for patients with acute and chronic sinusitis, as well as during the rehabilitation period after surgery on the paranasal sinuses.

- polypous rhinosinusitis;
- allergic rhinosinusopathy;
- individual sensitivity to the components of the drug, including the occurrence of acute allergic reactions on the face and neck;
- hypertension of the second-third degree;
- age up to 12 years (not enough information about the effect of active ingredients on the child's body);
- pregnancy and lactation period (research on the effect of components of cyclamen extract on these categories of patients was not conducted);

For intranasal administration of the drug, the following steps should be followed:
- open the vials with lyophilisate (by unscrewing the cap and removing the cork) and solvent;
- pour the solvent into the vial with the lyophilisate;
- screw the dispenser onto the vial and shake until a homogeneous mixture is obtained;
- before the introduction of the nasal passages to carry out several test sprays;
- spraying in the nasal passages produced by one click, holding the breath;
- the resulting solution is injected once a day, one spray in each nasal passage;
- Sinuforte can be used daily (6 - 8 days) or every other day (within 12 - 16 days);
- Exceeding the specified dose does not lead to increased action, but can cause a burning sensation and pain at the spray site.
- in case of overdose, the mucous membranes should be washed with warm water and symptomatic treatment should be carried out.
- Sinuforte can be used in combination with antibacterial agents. Use in conjunction with anesthetics is contraindicated. Information about the interaction with other drugs is missing.