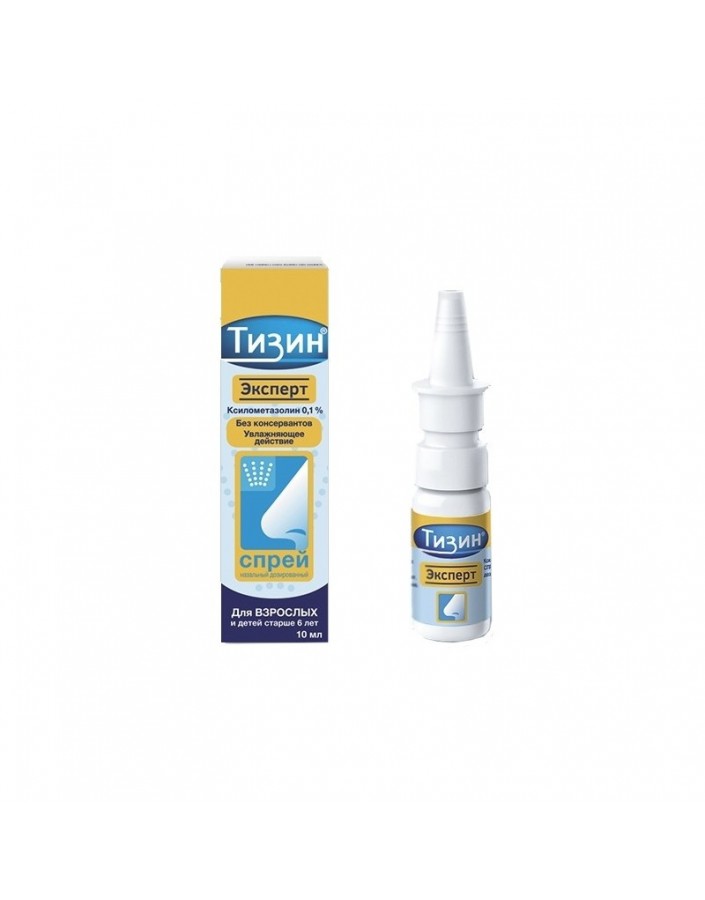 In 1 ml of solution contains:

Xylometazoline (imidazole derivative) - alpha-adrenostimulyator, constricts the blood vessels of the nasal mucosa, eliminating swelling and hyperemia of the mucous membrane. Relieves nasal breathing in rhinitis.
Hyaluronic acid, which is part of the drug, has a moisturizing effect when used in nasal drugs due to the ability to maintain the mucous membranes in a moist state and creates optimal conditions for recovery processes.
The action usually begins within 5-10 minutes.

When applied topically, it is practically not absorbed, plasma concentrations are so small that they cannot be determined by modern analytical methods.
In humans, pharmacokinetic studies have not been conducted.

In the following cases, "Tizin® Expert can be used only by carefully weighing the benefits and risks of treatment:

METHOD OF ADMINISTRATION AND DOSES

Xylometazoline in the form of a dosed spray should not be used for more than 5-7 days, if the doctor did not recommend a different duration of treatment.

After completion of therapy, the drug can be reappointed only after a few days.

Always consult with your doctor about the duration of use in children.

In the case of chronic rhinitis, the drug "Tizin® Expert ”0.05% and 0.1% can be used only under the supervision of a physician, given the risk of atrophy of the nasal mucosa.

- Remove the protective cap. Before the first application, repeatedly press the spray nozzle until a uniform cloud of “fog” appears. The bottle is ready for further use.

- When applying, press once. Drug inhale through the nose. If possible, keep the spray bottle upright. Do not spray horizontally or down. After use, close the bottle cap.

"Tizin® Expert ”can cause transient slight irritation of the nose (burning) in susceptible people, sneezing.

Often (> 1- <10%) after the cessation of the action of the drug, an increased swelling of the nasal mucosa can be observed (reactive hyperemia).

Prolonged or too frequent use of xylometazoline, or its use in high doses can lead to a burning sensation in the nose or dry mucous membranes, as well as reactive nasal congestion, with the development of medical rhinitis, paresthesia, sneezing, hypersecretion. This effect can be observed even 5-7 days after the completion of treatment, and with prolonged use it can be the cause of chronic inflammation of the mucous membrane with the formation of crusts (dry rhinitis).

In isolated cases (0.1% - <1%), local intranasal use of sympathomimetics may be accompanied by systemic effects, such as palpitations, tachycardia, arrhythmias, and elevated blood pressure.

An overdose or accidental ingestion of the drug can lead to the following symptoms: dilated pupils, nausea, vomiting, cyanosis, fever, convulsions, tachycardia, arrhythmia, collapse, cardiac arrest, hypertension, pulmonary edema, respiratory failure, mental disorders. In addition, the following symptoms may be observed: suppression of the function of the central nervous system, accompanied by drowsiness, a decrease in body temperature, bradycardia, hypotension, apnea, and coma.

The use of Activated carbon, gastric lavage, artificial respiration with the introduction of oxygen. To reduce blood pressure apply phentolamine 5 mg in physiological solution intravenously slowly or 100 mg orally.

Vasopressor drugs are contraindicated. If necessary, use antipyretic and anticonvulsant drugs.

INTERACTION WITH OTHER PREPARATIONS AND OTHER FORMS OF INTERACTION

The simultaneous use of MAO inhibitors such as trancilcypromine or tricyclic antidepressants can lead to an increase in blood pressure due to the cardiovascular effects of these substances.

With long-term treatment or use of the drug "Tizin® Expert ”in higher doses can not exclude the possibility of its systemic action on the cardiovascular system. In such cases, the ability to drive and use the technique may be impaired.

Prolonged use (more than 7 days) and overdose of sympathomimetics that have a decongestant effect can lead to reactive hyperemia of the nasal mucosa. As a result, there is difficulty in nasal breathing, which leads to the fact that the patient begins to use the drug again or even constantly. This can lead to chronic edema (medical rhinitis), and eventually even atrophy of the nasal mucosa (ozena).

In milder cases, to improve the condition of the patient, you can first stop the introduction of sympathomimetic in one nostril, and after reducing the complaints continue to enter it into the other nostril to at least partially provide nasal breathing.

Do not exceed the recommended dose, especially in children and the elderly.

It is not recommended to use the drug in continuous mode for more than 7 days. If the medicinal product has fallen into disrepair or the expiration date has expired - do not throw it into sewage and on the street! Put the medicine in the bag and put it in the trash. These measures will help protect the environment!

Do not use the drug after the expiration date printed on the package.