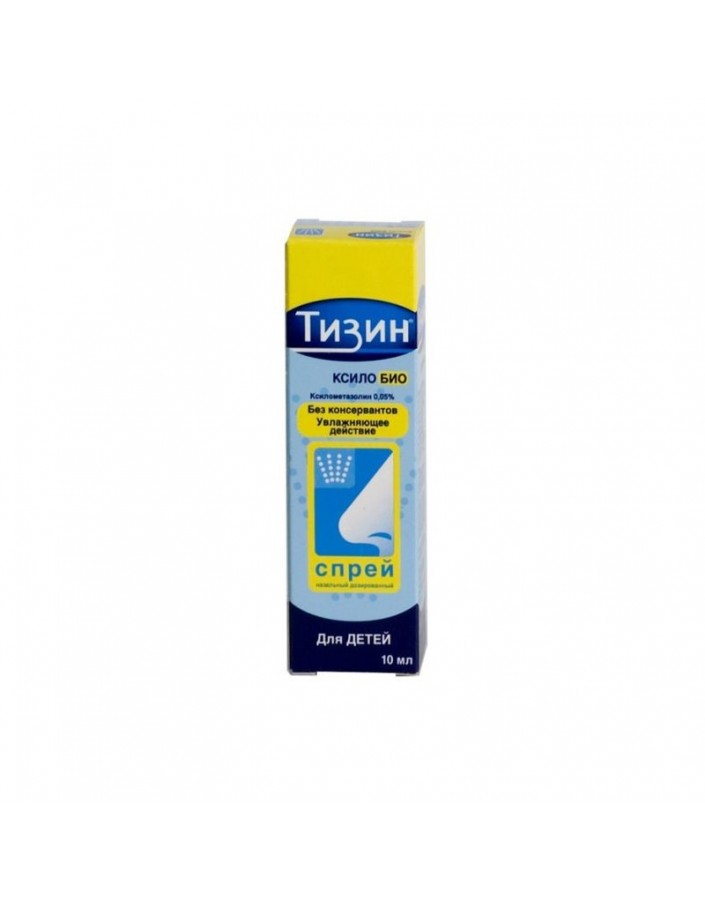 Spray nasal dosage of 0.05% in the form of a transparent or slightly opalescent solution, colorless or slightly yellowish.
1 ml
Xylometazoline hydrochloride 0.5 mg

- reduction of swelling of the nasal mucosa with rhinitis, incl. allergic rhinitis, acute respiratory disease with symptoms of rhinitis, pollinosis;

- facilitate the discharge of discharge from the nose with paranasal sinusitis and inflammation of the middle ear caused by a cold.

Spray nasal dosage of 0.05% is intended for children aged 2 to 6 years.

Spray nasal dosed 0.1% is intended for adults and children over 6 years old.

Adults and children over 6 years old are prescribed a nasal spray dose of 0.1%, 1 dose per each nasal passage, up to 3 times / day. The dose depends on the individual sensitivity of the patient and the clinical effect.

Do not use the drug for more than 5 days if the doctor did not recommend another duration of treatment. After completion of therapy, the drug can be reappointed only after a few days.

In chronic rhinitis, the drug can be used only under medical supervision, given the risk of atrophy of the nasal mucosa.

Method of use of the drug

Remove protective cap. Before the first application, press the spray nozzle several times until a uniform cloud of "fog" appears. The bottle is ready for further use.

When applying, press 1 time. Drug inhale through the nose. If possible, keep the spray bottle upright. Do not spray horizontally or down. After use, close the bottle cap.

On the part of the respiratory system: transient slight irritation of the nasal cavity (burning) in susceptible people, sneezing. Often (> 1%, <10%) after the cessation of the action of the drug, an increased edema of the nasal mucosa (reactive hyperemia) may be observed. Prolonged or too frequent use of xylometazoline, or its use in high doses can lead to a burning sensation in the nose or dry mucous membranes, as well as reactive nasal congestion, with the development of medical rhinitis, paresthesia, sneezing, hypersecretion. This effect can be observed even 5-7 days after the completion of treatment, and with prolonged use it can be the cause of chronic inflammation of the mucous membrane with the formation of crusts (dry rhinitis).

From the side of the central nervous system: rarely (> 0.01%, <1%) - headache, insomnia, blurred vision, fatigue and depression (with prolonged use in high doses).

On the part of the cardiovascular system: in isolated cases (0.1%, <1%), local intranasal use of sympathomimetics may be accompanied by systemic effects, such as heartbeat, tachycardia, arrhythmia, and an increase in blood pressure.

- patients with surgery on the meninges in history;

- newborns and children under the age of 2 years;

In the following cases, Tizin® Xylo Bio can only be used by carefully weighing the benefits and risks of treatment:

- patients receiving MAO inhibitors or other drugs that can cause an increase in blood pressure;

Xylometazoline should not be used during pregnancy, because effects on the fetus in clinical studies have not been studied.

The drug should not be used during lactation, because It is not known whether the active substance is excreted in breast milk.
Use in children

Contraindicated in newborns and children under the age of 2 years.

Prolonged use and overdose of sympathomimetics that have a decongestant effect can lead to reactive hyperemia of the nasal mucosa. As a result, there is difficulty in nasal breathing, which leads to the fact that the patient begins to use the drug again or even constantly. This can lead to chronic edema (drug rhinitis), and eventually even atrophy of the nasal mucosa (ozen).

In milder cases, to improve the condition of the patient, you can first stop the introduction of sympathomimetic in one nasal passage, and after reducing complaints continue to introduce it into the other nasal passage to partially provide nasal breathing.

With long-term treatment or the use of the drug in higher doses, we cannot exclude the possibility of its systemic action on the cardiovascular system. In such cases, the ability to drive and use the technique may be impaired.

The patient should be informed that if the drug has become unusable or the expiration date has expired, then it should not be thrown into the wastewater or on the street. It is necessary to put the drug in the bag and put it in the trash. These measures will help protect the environment.

An overdose or accidental ingestion of the drug can lead to the following symptoms: dilated pupils, nausea, vomiting, cyanosis, fever, convulsions, tachycardia, arrhythmia, collapse, cardiac arrest, hypertension, pulmonary edema, respiratory failure, mental disorders. In addition, the following symptoms may be observed: suppression of the function of the central nervous system, accompanied by drowsiness, a decrease in body temperature, bradycardia, hypotension, apnea and coma.

Treatment: the use of Activated carbon, gastric lavage, artificial respiration with the introduction of oxygen. To reduce blood pressure apply phentolamine 5 mg (in saline) IV slowly or 100 mg orally. Vasopressor drugs are contraindicated. If necessary, use antipyretic and anticonvulsant drugs.

The simultaneous use of MAO inhibitors such as trancilcypromin or tricyclic antidepressants can lead to an increase in blood pressure due to the cardiovascular effects of these substances.