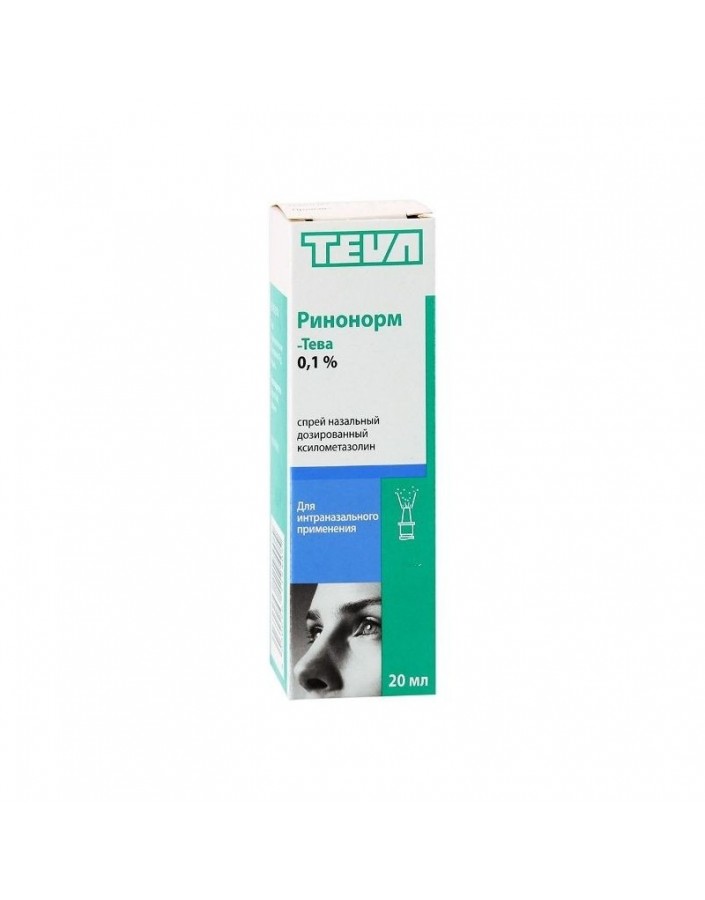 Xylometazoline is an alpha adrenergic agonist used for topical use in ENT practice.

When applied topically, xylometazoline causes a narrowing of the arterioles, which leads to a decrease in hyperemia and edema of the mucous membranes of the nasopharynx and a decrease in secretion. A distinct local effect of the drug is detected within a few minutes and lasts for several hours (up to 6-8 hours), manifesting itself in the restoration of the patency of the nasal passages, openings of the sinuses and the Eustachian tubes. Restoration of air permeability of the nasopharynx improves the well-being of patients and reduces the risk of possible complications caused by stagnation of mucous secretions.

With topical administration, xylometazoline is practically not absorbed, so plasma concentrations are very low (not analytically determined).

As a symptomatic treatment for the following diseases and conditions:

- acute otitis media (to reduce swelling of the mucous membrane of the Eustachian tube);

- preparation of patients for diagnostic procedures in the nasal passages.

- Hypersensitivity to xylometazoline or other components of the drug;

- inflammation of the skin, nasal mucosa and the formation of a crust (dry rhinitis);

The drug should not be taken during pregnancy. Take care when breastfeeding.

Adults and children over 10 years old:

1 dose (one press on the piston unit) in each nasal passage no more than 3 times a day (the maximum dose should not exceed 7 times a day).The interval between the introduction of the drug should not be less than 6 hours.

In order to avoid complications in the form of renewed symptoms of the disease, the duration of continuous use of the drug should not exceed 7 days.

Before using the drug Rinonorm-Teva It is recommended to release the nasal passage from the secret, and during the administration of the drug it is necessary to take a light breath through the nose.

For use in children from 2 to 10 years old, you should use the drug Rinonorm-Teva, nasal spray dosed [for children].

Sensation of burning and dryness of the nasal mucosa;

in rare cases - irritation of the nasal mucosa, oral cavity and larynx, headache and nausea;

In rare cases of overdose, occurring predominantly in children, the following symptoms may occur: irregular pulse, increased blood pressure, in some cases - loss of consciousness. In case of overdose, symptomatic treatment is indicated under supervision.

In serious cases, non-selective alpha-blockers can be used to lower blood pressure, as well as intubation and mechanical ventilation. Vasoconstrictor drugs are contraindicated.

If you accidentally take a moderate or large amount of the drug inside, you should take Activated carbon (adsorbent) and sodium sulfate (a laxative), make a gastric lavage.

Simultaneous use of tri- or tetracyclic antidepressants may increase the systemic effects of xylometazoline. At the same time taking the drug with monoamine oxidase inhibitors (MAO), the risk of increased blood pressure is possible.

Influences on ability of driving of transport and on control of cars and mechanisms are not noted.

Store at a temperature not higher than 25 0WITH