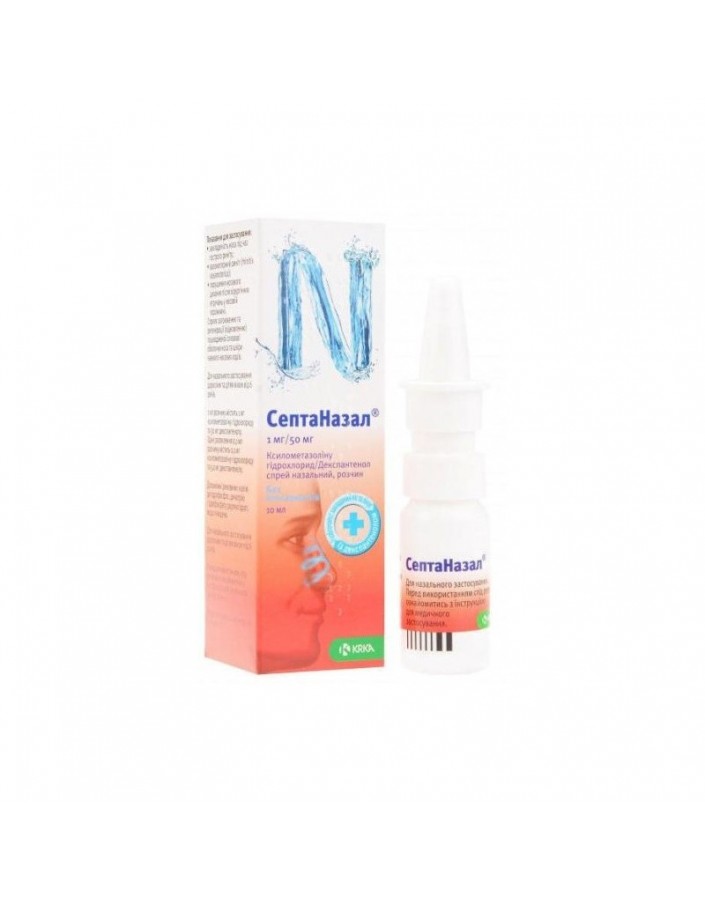 Xylometazoline - local vasoconstrictor (decongestant) with alpha-adrenomimetic activity, causes narrowing of the blood vessels of the mucous membrane of the nasal cavity, restores the patency of the nasal passages, eliminates nasal congestion, facilitates nasal breathing. The effect of xylometazoline usually occurs within a few minutes after its use and lasts up to 10 hours. Dexapanthenol - vitamin B, a derivative of pantothenic acid. Dexpanthenol is converted in the body into pantothenic acid, which is a component of coenzyme A (CoA), and participates in the processes of acetylation, carbohydrate and fat metabolism, in the synthesis of acetylcholine,corticosteroids, porphyrins, stimulates the recovery of the skin and mucous membranes, normalizes cellular metabolism, accelerates mitosis and increases the strength of collagen fibers. It has a regenerating, metabolic and weak anti-inflammatory effect.

Xylometazoline when applied topically, it is practically not absorbed. Concentrations in the blood plasma are so small that they can not be determined by modern analytical methods.

Dexapanthenol when applied topically, it is quickly absorbed by the skin and converted into pantothenic acid, binds to plasma proteins (mainly beta-globulin and albumin). Its concentration in the blood - 0.5-1 mg / ml, in the serum - 100 mcg / l. Pantothenic acid is not metabolized in the body (except for inclusion in CoA), it is excreted unchanged.

Hypersensitivity to any of the components of the drug; arterial hypertension, tachycardia, marked atherosclerosis, glaucoma; atrophic rhinitis; hyperthyroidism, porphyria, prostatic hyperplasia,surgery on the meninges (in history), simultaneous use with monoamine oxidase inhibitors (MAO) and tricyclic antidepressants; pregnancy, breastfeeding period, children under 6 years old;

Use during pregnancy and breastfeeding

Given that there is no data on the reproductive toxicity of the drug Septanazal, its use during pregnancy and during breastfeeding is not recommended.

For adults and children over 6 years old.

One metered injection in each nasal passage 3-4 times a day.

Patients may also develop symptoms of depression from the central nervous system, accompanied by drowsiness, a decrease in body temperature, bradycardia, shock, cessation of breathing, and coma.

Treatment: intake of enterosorbents (activated carbon) and gastric lavage, oxygen ventilation of the lungs. In order to reduce blood pressure, 5mg of phentolamine 0.9% sodium chloride solution is used by intravenous administration or 100mg of phentolamine inside. Vasoconstrictive drugs are contraindicated. If necessary, use antipyretic and anticonvulsant drugs.

Before use, you must clean the nasal passages.

Do not use for more than 5 days.

Does not contain preservatives. After opening the bottle, the drug should be used within 12 weeks.

During the period of use of the drug should be precautionary measures, or avoid driving vehicles and occupations of other potentially hazardous activities that require high concentration of attention and speed of psychomotor reactions.

10 ml (90 doses) of the drug in a vial of high-density polyethylene with a dosing device (pump) and a transparent protective cap of the combined material.

1 bottle together with the application instruction is placed in a pack cardboard.

At a temperature not higher than 25 ° С, in the original package.