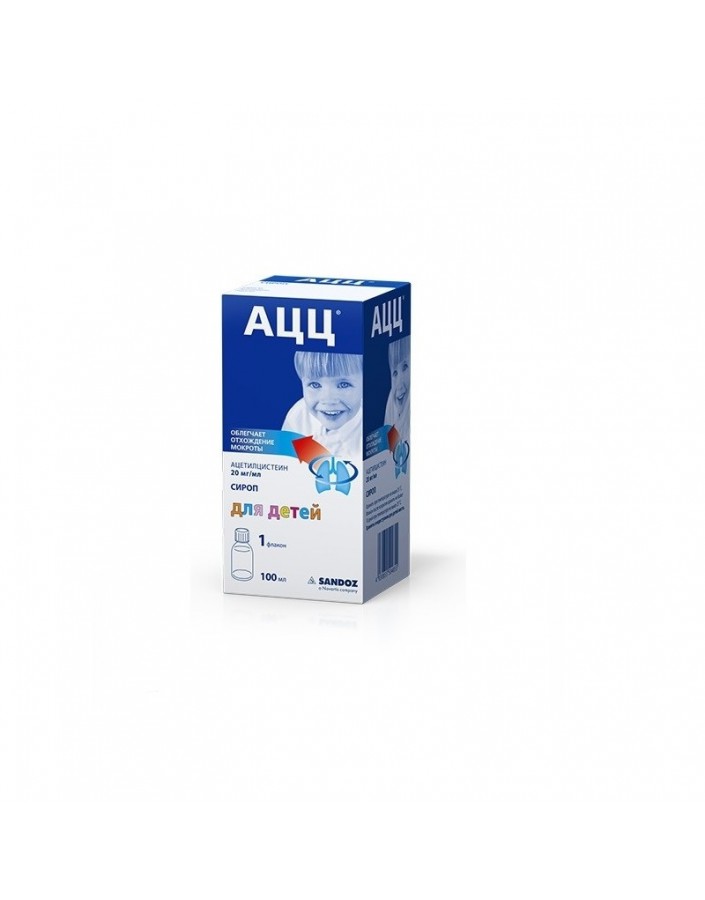 Acetylcysteine ​​is a derivative of the amino acid cysteine. It has a mucolytic effect, facilitates sputum discharge due to a direct effect on the rheological properties of sputum. The action is due to the ability to break the disulfide bonds of the mucopolysaccharide chains and cause the depolymerization of the mucoproteins of sputum, which leads to a decrease in the viscosity of the sputum. The drug retains activity in the presence of purulent sputum. It has an antioxidant effect, based on the ability of its reactive sulfhydryl groups (SH-groups) to bind with oxidative radicals and, thus, neutralize them. In addition, acetylcysteine ​​contributes to the synthesis of glutathione, an important component of the antioxidant system and chemical detoxification of the body.

The antioxidant effect of acetylcysteine ​​increases the protection of cells against the damaging effects of free radical oxidation, which is characteristic of an intense inflammatory reaction.

With prophylactic use of acetylcysteine, there is a decrease in the frequency and severity of exacerbations of bacterial etiology in patients with chronic bronchitis and cystic fibrosis.

Absorption is high. It is rapidly metabolized in the liver to form a pharmacologically active metabolite, cysteine, as well as diacetylcysteine, cystine, and mixed disulfides. Oral bioavailability is 10% (due to the pronounced effect of the “first pass” through the liver). The time to reach the maximum concentration (Cmax) in the blood plasma is 1 to 3 hours. Communication with plasma proteins is 50%. Excreted by the kidneys as inactive metabolites (inorganic sulphates, diacetylcysteine). The half-life (T1 / 2) is about 1 hour, impaired liver function leads to a lengthening of T1 / 2 to 8 hours. It penetrates the placental barrier. Data on the ability of acetylcysteine ​​to penetrate the blood-brain barrier and stand out with breast milk are not available.

Diseases of the respiratory system, accompanied by the formation of viscous sputum difficult to separate:

The drug should be taken orally, after eating.

The ATsTs® syrup is accepted by means of the measuring syringe or the measuring cup which is in packaging. 10 ml of syrup ACTS® corresponds to 1/2 measuring cup or 2 filled syringes. With short-term colds, the duration of the course is 4 - 5 days. In case of long-term diseases, the course of therapy is determined by the attending physician. In chronic bronchitis and cystic fibrosis, the drug should be taken for a longer time to achieve a prophylactic effect in infections. Additional fluid intake enhances the mucolytic effect of the drug.
In the absence of other appointments, it is recommended to adhere to the following dosages:

- hypersensitivity to acetylcysteine ​​or other components of the drug;
- gastric ulcer and duodenal ulcer in the acute stage;
- pregnancy;
- breastfeeding period;
- hemoptysis, pulmonary hemorrhage;
- children's age up to 2 years (for this dosage form);

Data on the use of acetylcysteine ​​during pregnancy and breastfeeding is limited. Use of the drug during pregnancy is possible only if the intended benefit to the mother outweighs the potential risk to the fetus.

If necessary, the use of the drug during lactation should decide on the termination of breastfeeding.

Violations of the heart and blood vessels

Disorders of the gastrointestinal tract

Disturbances from an organ of hearing and labyrinth disturbances

Symptoms: gastrointestinal symptoms such as diarrhea, vomiting and nausea may occur.

With simultaneous use of acetylcysteine ​​and antitussives due to suppression of the cough reflex, sputum stagnation may occur.

When applied simultaneously with antibiotics for oral administration (penicillins, tetracyclines, cephalosporins, etc.) their interaction with the thiol group of acetylcysteine ​​is possible, which may lead to a decrease in their antibacterial activity. Therefore, the interval between taking antibiotics and acetylcysteine ​​should be at least 2 hours (except cefixime and loracarbef).

Simultaneous use with vasodilating agents and Nitroglycerin can lead to increased vasodilator action.

When working with the drug it is necessary to use glassware, avoid contact with metals, rubber, oxygen, easily oxidized substances.

If the patient is not able to effectively cough, it is necessary to drain or aspirate the secret.

When using acetylcysteine, very rarely there have been reported cases of severe allergic reactions, such as Stevens-Johnson syndrome and Lyell's syndrome. In the event of changes in the skin and mucous membranes, you should immediately consult a doctor, taking the drug should be stopped.

It is necessary to avoid the use of the drug in patients with renal and / or hepatic insufficiency in order to avoid the additional formation of nitrogenous compounds. 1 ml of syrup contains 41.02 mg of sodium. This should be taken into account when using the drug by patients on a diet designed to limit sodium intake (with reduced sodium / salt content).

Influence on ability to steer vehicles, mechanisms
Information about the effect of the drug on the ability to drive vehicles and engage in other potentially hazardous activities that require increased concentration of attention and psychomotor speed of reaction, is missing.

Store at a temperature not higher than 25 ºС.