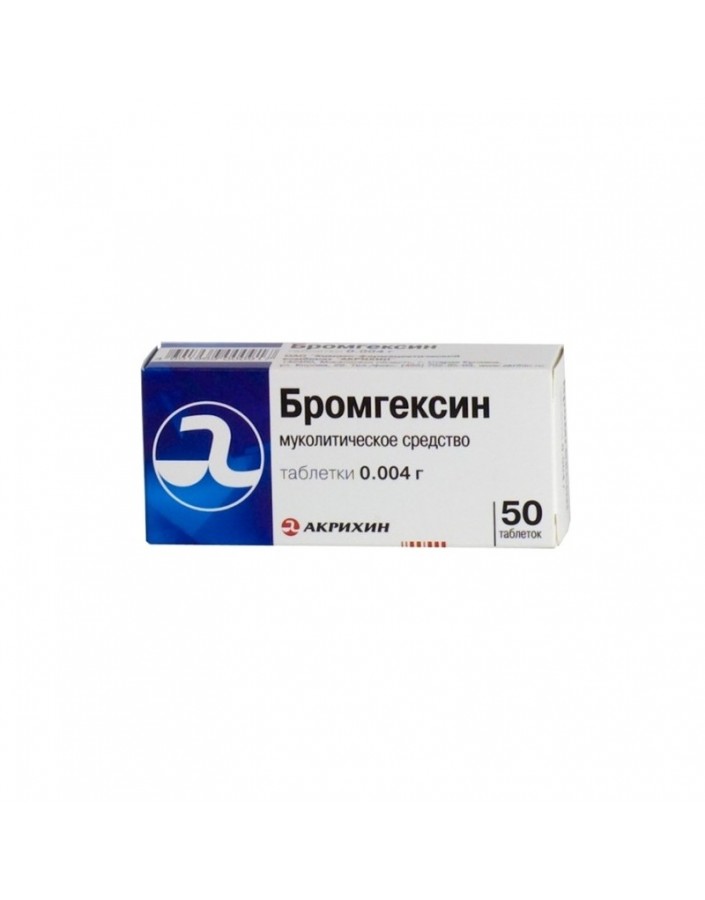 Tablets from white to white with a creamy or yellowish shade of color, flat-cylindrical, with a facet.

A mucolytic (secretolytic) agent, has expectorant and weak antitussive action. Reduces the viscosity of sputum (depolymerizes mucoprotein and mucopolysaccharide fibers, increases the serous component of bronchial secretions); activates the ciliated epithelium, increases the volume and improves the discharge of sputum. Stimulates the production of endogenous surfactant, ensuring the stability of alveolar cells in the process of respiration. The effect appears after 2-5 days from the start of treatment.

When ingested, Bromhexine is almost completely (99%) absorbed within 30 minutes. About 80% of Bromhexine is extensively metabolized due to the effect of the first “passage” through the liver. In plasma, Bromhexine binds to proteins, penetrates the blood-brain and placental barriers. In the liver, bromhexine undergoes demethylation and oxidation with the formation of the active metabolite, Ambroxol. The half-life is 15 hours due to slow reverse diffusion from tissues. Excreted by the kidneys. In chronic renal failure, the excretion of bromhexine metabolites is impaired. With repeated use, Bromhexine may accumulate.

Indications for use Bromhexine tablets

Diseases of the respiratory tract, accompanied by difficulty in the discharge of viscous sputum: tracheobronchitis, bronchitis of different etiology (including those complicated by bronchiectasis), bronchial asthma, pulmonary tuberculosis, pneumonia, cystic fibrosis. Sanitation of the bronchial tree in the preoperative period and during the therapeutic and diagnostic intra bronchial manipulations, prevention of congestion in the bronchi thick viscous sputum after surgery.

A history of gastric bleeding, renal and / or liver failure, diseases of the bronchi, accompanied by excessive accumulation of secretions.

The drug should be taken orally, regardless of the meal.

The course of treatment is from 4 to 28 days.

Rarely, with long-term use of the drug, allergic reactions, dyspepsia, including nausea, vomiting; aggravation of gastric ulcer and duodenal ulcer, dizziness, headache, increased activity of liver transaminases. In these cases, the drug should be discontinued.

Bromhexine is not prescribed simultaneously with drugs that suppress the cough center (including those containing codeine), since this makes it difficult to evacuate the liquefied sputum.

Bromhexine contributes to the penetration of antibiotics (amoxicillin, Erythromycin, cephalexin, oxytetracycline), sulfa drugs into the bronchial secretion in the first 4-5 days of antimicrobial therapy.

Bromhexine is not compatible with alkaline solutions.

In the course of treatment, it is recommended to take a sufficient amount of liquid, which supports the secretolytic action of Bromhexine.

In children, treatment should be combined with postural drainage or vibration massage of the chest, which facilitates the evacuation of the secret from the bronchi.

During the period of treatment, care must be taken when driving and engaging in other potentially hazardous activities that require high concentration of attention and speed of psychomotor reactions.

Do not use after the expiration date.