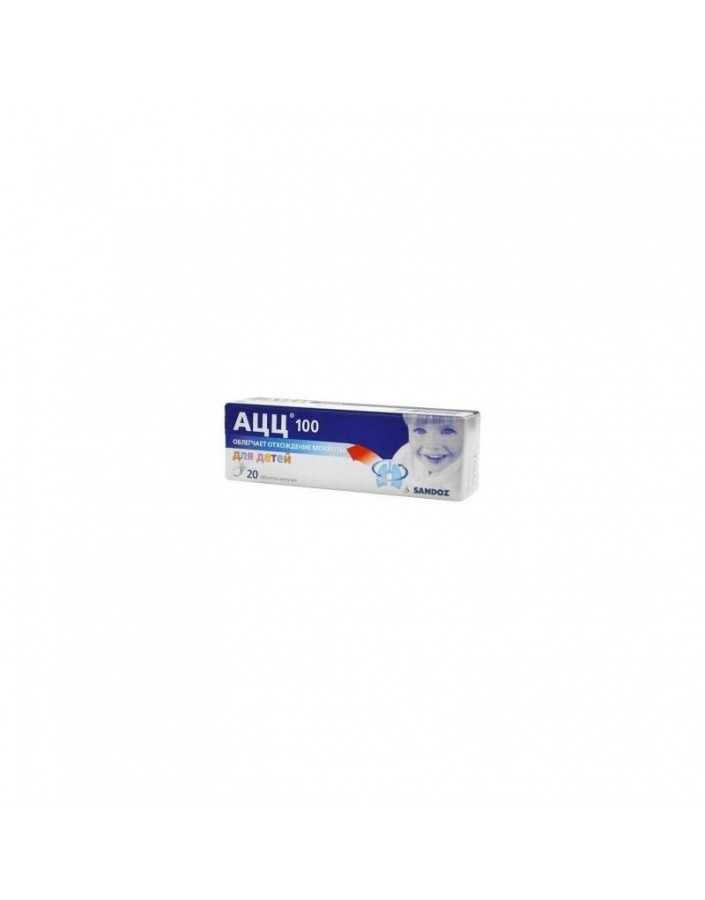 Mucolytic drug. The presence of sulfhydryl groups in the structure of the acetylcysteine ​​molecule contributes to the breakdown of disulfide bonds of acid mucopolysaccharides of sputum, which leads to a decrease in the viscosity of mucus. It has a mucolytic effect, facilitates sputum discharge due to a direct effect on the rheological properties of sputum. The drug retains activity in the presence of purulent sputum.

With prophylactic use of acetylcysteine, a decrease in the frequency and severity of exacerbations in patients with chronic bronchitis and cystic fibrosis has been observed.

Carefully: the drug should be used in patients with varicose veins of the esophagus, with an increased risk of developing pulmonary hemorrhage and hemoptysis, with bronchial asthma, adrenal gland diseases, liver and / or kidney failure.

Due to insufficient data, the use of the drug during pregnancy and lactation is possible only in cases where the intended benefit to the mother outweighs the potential risk to the fetus or child.

With short-term colds: the duration of treatment is 5-7 days. In chronic bronchitis and cystic fibrosis, the drug should be used for a long time to prevent infections.

The drug should be taken after meals. Additional fluid intake enhances the mucolytic effect of the drug.

Effervescent pills (ACC® 100 and ACC® 200) should be dissolved in 1/2 cup of water. Take immediately after dissolution, in exceptional cases, you can leave the finished solution for 2 hours.

Other: in isolated cases - the development of bleeding as a manifestation of hypersensitivity reactions.

In bronchial asthma and obstructive bronchitis, acetylcysteine ​​should be administered with caution under the systematic control of bronchial patency.

With the development of adverse reactions, the patient should stop taking the drug and consult a doctor.

When dissolving the drug, it is necessary to use glassware, avoid contact with metals, rubber, oxygen, easily oxidized substances.

When treating patients with diabetes, it is necessary to consider that 1 pill effervescent ACC® 100 and ACC® 200 corresponds to 0.006 XE.

There are no data on the negative effect of the drug in recommended doses on the ability to drive vehicles and perform other activities requiring concentration of attention and quickness of psychomotor reactions.

With simultaneous use of acetylcysteine ​​and antitussives due to the suppression of the cough reflex, a dangerous stagnation of mucus can occur (use with caution).

With simultaneous use of acetylcysteine ​​and Nitroglycerin, the vasodilator effect of nitroglycerin may be enhanced.

Synergism of acetylcysteine ​​with bronchodilators is noted.

Acetylcysteine ​​reduces the absorption of cephalosporins, penicillins and Tetracycline, so they should be taken orally no earlier than 2 hours after taking acetylcysteine.

Acetylcysteine ​​is pharmaceutically incompatible with antibiotics (penicillins, cephalosporins, Erythromycin, tetracycline and amphotericin B) and proteolytic enzymes.

When acetylcysteine ​​comes into contact with metals, rubber, sulfides with a characteristic odor are formed.

With erroneous or deliberate overdose, symptoms such as diarrhea, vomiting, stomach pain, heartburn, nausea are observed. To date, no serious and life-threatening side effects have been observed.

The drug should be kept out of the reach of children, in a dry place at a temperature not exceeding 25 ° C.