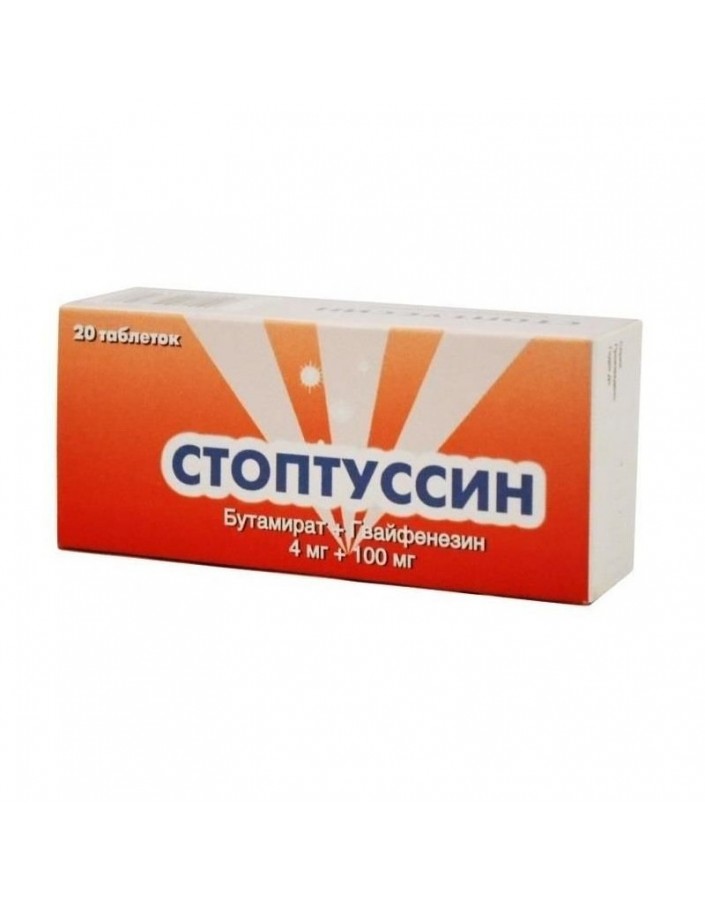 Combined drug that has mucolytic (expectorant) and antitussive effect. Butamirath, which is a part of the preparation, has a local anesthetic effect on the bronchial mucosa, which provides an antitussive effect. In addition, it has a moderate bronchodilator effect. Gvayfenezin reduces the viscosity of sputum and thereby improves its discharge.

Data on the pharmacokinetics of the drug Stoptussin not provided.

- dry irritating cough (including in infectious and inflammatory diseases of the upper and lower respiratory tract);

- to eliminate cough in the pre-and postoperative period (tablets).

The drug is preferably taken after meals.

Tablets should be taken without chewing, with a liquid (water, tea, fruit juice).

The appropriate number of drops is dissolved in 100 ml of liquid (water, tea, fruit juice).

The dose of the drug depends on the patient's body weight:

The interval between doses should be 4-6 hours.

At observance of the recommended dosing regimen, the drug is usually well tolerated.

From the side of the central nervous system: rarely - dizziness, headache, drowsiness.

- I trimester of pregnancy;

Stoptussin should not be prescribed in the first trimester of pregnancy, for use in subsequent trimesters there must be especially important reasons.

It is not known whether butamirats are released citrate and guaifenesin with breast milk in humans. Therefore, for the use of the drug Stoptussin during lactation must be vital indications.

During the period of drug treatment is not recommended to drink alcohol.

The drug in high doses may have an adverse effect on activities that require increased attention, motor coordination and quick decision-making (for example, driving, car maintenance and high-altitude work).

The effect of guaifenesin is enhanced by lithium and Magnesium preparations.

Guaifenesin enhances the analgesic effect of Paracetamol and Acetylsalicylic acid; enhances the effect of sedatives, hypnotics and general anesthetics on the central nervous system; action of muscle relaxants, ethanol.

The drug in the form of pills should be kept out of the reach of children, protected from light at a temperature not exceeding 25 ° C.