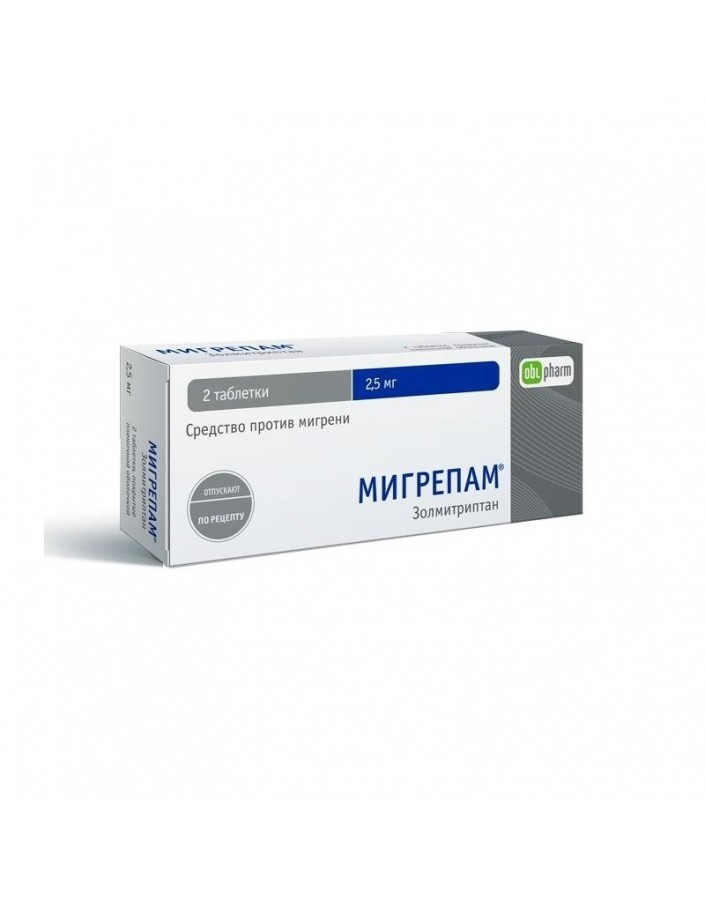 The introduction of zolmitriptan to laboratory animals resulted in vasoconstriction in the carotid artery pool. In addition, the results of studies on laboratory animals suggest that zolmitriptan blocks the central and peripheral activity of the trigeminal nerve by inhibiting the release of the peptide associated with the calcitonin gene, the vasoactive intestinal peptide and substance P.

In clinical studies, the effect of zolmitriptan on headaches and other migraine symptoms (such as nausea, photophobia, phonophobia) was observed 1 hour later and increased from 2 to 4 hours after taking the drug.

Zolmitriptan is equally effective for migraine with aura, migraine without aura, and migraine associated with menstruation.Taking zolmitriptan during aura did not prevent migraine headache, so the drug should be taken after the onset of a pain attack.

Relief of migraine attacks with and without aura.

The safety of zolmitriptan during pregnancy has not been studied. The results of animal studies revealed no direct teratogenic effects. However, some data from studies of embryotoxicity suggest a possible decrease in the viability of embryos. Use of the drug is contraindicated during pregnancy.

Migrepam® can be used only in cases of clearly diagnosed migraine. Before prescribing zolmitriptan, as well as other means for the relief of migraine, it is necessary to exclude other possible serious neurological diseases in patients with previously undetermined migraine, as well as in patients with established diagnosis of migraine in the presence of atypical symptoms.

Zolmitriptan is not indicated for the treatment of hemiplegic, basilar, and ophthalmoplegic migraines.

Zolmitriptan should not be used in patients with Wolff-Parkinson-White syndrome or arrhythmias associated with other additional pathways for impulse conduction.

Before zolmitriptan is prescribed to patients with risk factors for coronary heart disease (CHD) (for example, smoking, hypertension, hyperlipidemia, diabetes, burdened family history of CHD), an examination of the cardiovascular system is necessary, it is necessary to monitor blood pressure and electrocardiogram. Particular attention should be paid to postmenopausal women and men over 40 years of age with these risk factors. However, not all patients during examination can detect cardiovascular diseases, and in very rare cases serious cardiovascular complications can develop in patients who have not had indications of a cardiovascular disease in history.

As with the use of other serotonin 5HT1B / 1D receptor agonists, with zolmitriptan, sensations of heaviness, pressure or tightness in the region of the heart have been reported.If you experience pain in the chest or symptoms of coronary heart disease, stop taking zolmitriptan before conducting an appropriate medical examination.

Side effects may be more frequent while taking triptans and herbal preparations containing St. John's wort (Hypericum perforatum). It was noted the development of serotonin syndrome with the simultaneous use of triptans and SSRIs or SSRIs. Serotonin syndrome may include the following signs and symptoms: changes in mental status, autonomic and neuromuscular symptoms. Careful observation of the simultaneous prescription of Migrepam® and SIOZS or SIOZSiN is recommended, especially during the initiation of therapy, increasing the dose or adding another drug that affects serotonin metabolism to therapy (see the section "Interaction with Other Drugs").

Excessive use of antifungal drugs can lead to an increase in the incidence of headache, which potentially requires discontinuation of treatment.If a patient has frequent or daily headaches, despite the regular use of drugs to treat this condition, you should be aware of the possibility of developing headaches with excessive use of drugs for the treatment of headaches.

Impact on the ability to drive trans. Wed and fur.:

There was no significant deterioration in the performance of psychomotor tests while taking zolmitriptan at a dose of up to 20 mg. Patients whose activities require a high rate of psychomotor reactions (for example, driving a vehicle or mechanisms) are advised to use caution because of the possible development of drowsiness and other symptoms of migraine.

Tablets are taken entirely inside with water.

The recommended dose of the drug to relieve a migraine attack is 2.5 mg (1 tablet). It is recommended to take the drug as soon as possible after the onset of a headache, but the drug is also effective when taken at a later time after the onset of an attack.If migraine symptoms reappear within 24 hours, you can take a repeated dose of Migrepam®. It is not necessary to accept the repeated dose earlier than in 2 hours after reception of the first dose. If there is no clinical effect after taking the first dose, it is unlikely that the drug will be taken again during the same attack.

If a patient has not achieved a therapeutic effect after taking a dose of 2.5 mg, Migrepam® can be used at a dose of 5 mg (2 tablets) to relieve subsequent migraine attacks.

You should not take more than 2 doses of Migrepam® per day. The total dose of zolmitriptan, taken during the day, should not exceed 10 mg (4 tablets).

Migrepam® is not indicated for the prevention of migraine.

Adverse reactions with zolmitriptan, as a rule, occur within 4 hours after taking the drug, are transient in nature and resolved spontaneously without treatment. The frequency of adverse reactions does not increase with repeated doses.

On the part of the musculoskeletal system: often - muscular weakness, myalgia.

On the part of the immune system: rarely - hypersensitivity reactions, including urticaria, angioedema, and Anaphylactic reactions.

Some of the symptoms listed may be symptoms of a migraine.

In studies on the interaction of zolmitriptan with caffeine, ergotamine, dihydroergotamine, Paracetamol, Metoclopramide, pizothiphene, Fluoxetine, rifampicin and propranolol, there were no clinically significant changes in the pharmacokinetic parameters of zolmitriptan and its active metabolite.

The results of studies involving healthy volunteers indicate a lack of pharmacokinetic and clinically significant interaction of zolmitriptan and ergotamine.However, due to the theoretical risk of coronary angioscience, the simultaneous use of these drugs is contraindicated. It is recommended to use zolmitriptan not earlier than 24 hours after taking ergotamine or its derivatives.

After the application of moclobemide (MAO-A inhibitor), a slight increase (by 26%) in AUC of zolmitriptan and a threefold increase in the AUC of its active metabolite was noted.

A single dose of zolmitriptan at a dose of 50 mg by healthy volunteers usually showed a sedative effect. The elimination half-life of zolmitriptan is 2.5–3 hours; therefore, during an overdose, patient monitoring should continue for at least 15 hours or until an overdose is observed.

For zolmitriptan there is no specific antidote. In the case of severe intoxication, intensive care measures are recommended, including the restoration and maintenance of the airway, ensuring adequate oxygenation and ventilation of the lungs, as well as monitoring and supporting the function of the cardiovascular system.

The effect of hemodialysis and peritoneal dialysis on serum zolmitriptan concentration has not been established.