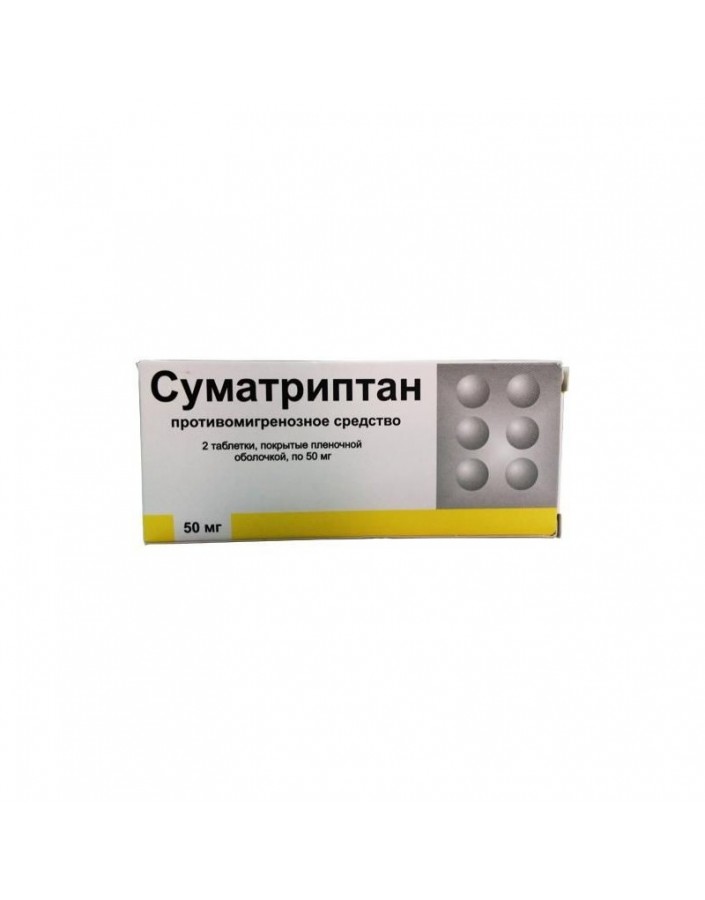 Antifungal agent. Specific selective agonist (5-hydroxytryptamine-1-serotonin receptors) (5HT1D), localized predominantly in the blood vessels of the brain, does not act on other subtypes of 5-HT serotonin receptors (5HT2-5NT7). Causes vasoconstriction of the carotid arterial bed, which supply blood to extracranial and intracranial tissues (dilation of the meninges and / or edema is the main mechanism of migraine development in humans), without having a significant effect on cerebral blood flow. Inhibits the activity of receptors of the endings of the afferent fibers of the trigeminal nerve in the dura mater (as a result, the release of sensory neuropeptides decreases). Both of these effects may underlie the anti-migraine action of Sumatriptan. Eliminates nausea and photophobia associated with migraine attack. In 50-70% of cases, it quickly eliminates a seizure when taken orally at a dose of 25-100 mg. Within 24 hours in 1/3 of cases, a relapse may develop, requiring repeated use. The clinical effect is usually observed 30 minutes after ingestion.

After ingestion is rapidly absorbed, after 45 minutes its concentration in the plasma reaches 70% of the maximum level. Bioavailability - 14% (due to presystemic metabolism and incomplete absorption). After ingestion 100 mg of sumatriptan Cmax in blood plasma is 54 ng / ml. Communication with plasma proteins - 14-21%, total volume of distribution - 170 l (2.4 l / kg). Metabolized by oxidation with the participation of MAO (predominantly isoenzyme A) with the formation of the main metabolite - indole acetic analogue of sumatriptan, which does not possess pharmacological activity against 5HT1 and 5HT2-serotonin receptors. The main metabolite is excreted mainly in the urine, in the form of the free acid and its glucuronide conjugate. T1/2 sumatriptan - about 2 h. Plasma clearance - 1160 ml / min, renal clearance - 260 ml / min; extrarenal clearance - 80% of total clearance.

Excreted by the kidneys, mainly in the form of metabolites (97% after ingestion) - free acid or gluconoid conjugate.

- migraine (relief of attacks, with or without aura).

Inside, swallowing the pill whole and drinking water.

Begin treatment as soon as possible after the onset of a migraine attack (although the drug is effective at any stage of the attack).

For the relief of acute migraine attacks, the recommended dose for adults is 50 mg 1 time / day. Some patients may require a higher dose - 100 mg. If the symptoms do not disappear and do not decrease after taking the first dose, then to stop same attack re-take the drug should not be. However, the drug can be used for edema. follow migraine attacks.

If the patient feels better after the first dose, and then the symptoms recur, you can take the second dose for the next 24 hours at least two hours after the first dose. The maximum dose of sumatriptan should not exceed 300 mg over a 24-hour period.

From the gastrointestinal tract: nausea, vomiting, ischemic colitis (the connection of these side effects with sumatriptan has not been established); dysphagia, feeling of discomfort in the stomach.

Movement Disorders: feeling of stiffness (these symptoms are usually transient, but can be intense and occur in any part of the body, including the chest and throat); tremor, stiff neck muscles.

From the side of the central nervous system: sensory impairment, including paresthesia; convulsive seizures (in some cases they were observed in patients with a history of convulsions or in conditions that predispose to the onset of convulsions; in some patients there were no predisposing factors), dystonia.

From the senses: diplopia, flashing of "flies" before eyes, nystagmus, scotoma, reduced visual acuity. Partially transient loss of vision is extremely rare. However, it should be borne in mind that visual impairment may be associated with migraine attacks.

From the laboratory indicators: minor changes in liver transaminase activity.

Other: shortness of breath, nosebleeds.

- CHD (including suspicion of it);

- myocardial infarction (including a history);

- stroke or transient ischemic attack (including in history);

- reception along with ergotamine or its derivatives (including methysergide);

- use on the background of taking MAO inhibitors or earlier than 2 weeks after discontinuation of these drugs;

- severe liver and / or kidney dysfunction;

- pregnancy, lactation period (within 24 hours after taking the drug);

- epilepsy (including any condition with a decrease in the convulsive readiness threshold);

- in patients with hypersensitivity to sulfonamides (allergic reactions are possible with severity from cutaneous manifestations to anaphylaxis).

Sumatriptan should be prescribed only if the diagnosis of migraine is not in doubt, while it should be used as soon as possible after the onset of a migraine attack, although it is equally effective when used at any stage of the attack.Not intended for the prevention of migraine (introduction during the migraine aura before the onset of other symptoms may not prevent the development of headache). As with the use of other anti-migraine drugs, when prescribing sumatriptan in patients with previously undetermined migraine or in patients with atypical migraine, other potentially serious neurological conditions should be excluded. It should be noted that patients with migraine have an increased risk of developing cerebrovascular complications (stroke or transient cerebral circulation).

Patients at risk from the cardiovascular system do not start therapy without prior examination (women in menopausal women, men over 40, people with risk factors for developing coronary artery disease). A survey does not always reveal heart disease in some patients. In very rare cases, patients may have serious adverse reactions to the cardiovascular system, in the history of which there was no marked cardiovascular pathology. After taking the drug, transient intense pain and tightness in the chest may occur, extending to the neck. If there is reason to assume that these symptoms are a manifestation of coronary heart disease, it is necessary to conduct an appropriate diagnostic examination. Patients with controlled arterial hypertension should be prescribed with caution, since in some cases a transient increase in blood pressure and peripheral vascular resistance was observed; in patients suffering from such diseases, in which the absorption, metabolism or excretion of this drug (for example, impaired renal or liver function) can significantly change.

There have been very rare reports of the development of serotonin syndrome (including mental disorders, autonomic lability and neuromuscular disorders) after taking the SSRIs and sumatriptan. The development of serotonin syndrome has also been reported with a joint administration of triptans and IPSiN. In the case of joint administration of SSRIs / SSRIs and Sumatriptan, this group of patients should be closely monitored.

Sumatriptan should be used with caution in patients with epilepsy or organic brain lesions in history with a decrease in convulsive readiness threshold.

In patients with hypersensitivity to sulfonamides, administration of sumatriptan can cause allergic reactions, the severity of which varies from skin manifestations to anaphylaxis. Data on cross-sensitivity is limited, but care should be taken when prescribing sumatriptan to such patients. The abuse of drugs intended for the suppression of migraine attacks is associated with an increase in headaches in sensitive patients (headache associated with the abuse of drugs). At the same time, the possibility of drug withdrawal should be considered. If there is no effect on the first dose, the diagnosis should be clarified. Experience with sumatriptan in patients over 65 years of age is limited (there is no significant difference in pharmacokinetics compared with younger patients).

Do not exceed the recommended dose of sumatriptan.

Symptoms: when administered to 400 mg is not observed any other adverse reactions, except for the previously listed.

Treatment: symptomatic therapy, monitoring the patient's condition for at least 10 hours. There is no data on the effect of hemodialysis or peritoneal dialysis on the concentration of sumatriptan in plasma.

The interaction of sumatriptan with propranolol, flunarizine, pizothiphene and ethyl alcohol was not observed.

An interaction between sumatriptan and MAO inhibitors is possible (a decrease in the intensity of the metabolism of sumatriptan, an increase in its concentration).

The likelihood of side effects increases when Sumatriptan is taken together with Hypericum perforatum.

Store in a dry, protected from light, out of reach of children at a temperature not exceeding 30 ° C.