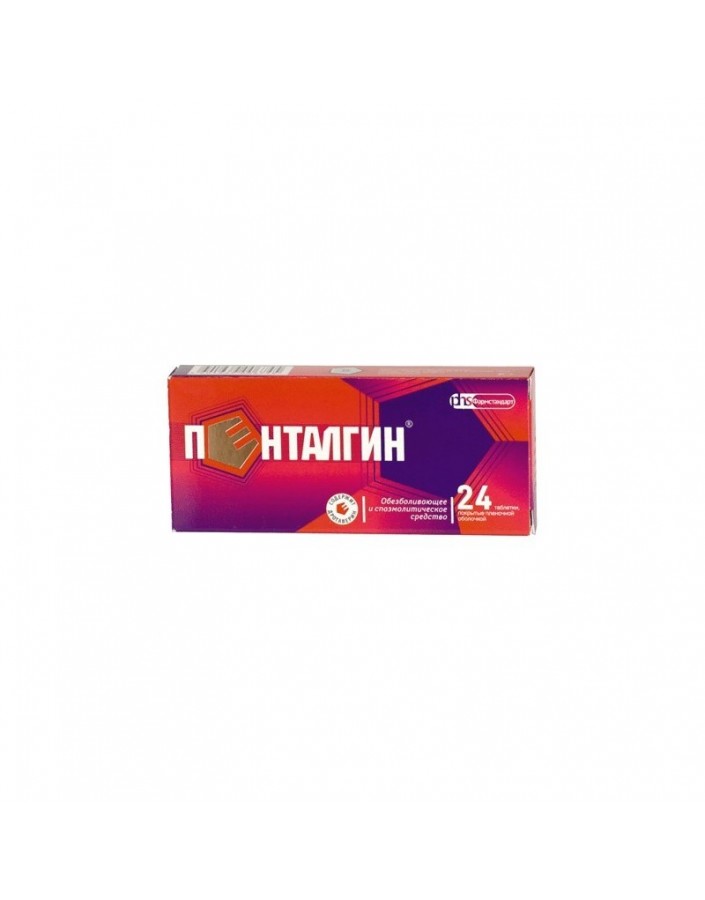 Paracetamol is a non-narcotic analgesic that has antipyretic and analgesic effects due to the blockade of cyclooxygenase in the central nervous system and the effect on the centers of pain and thermoregulation.

Naproxen is a non-steroidal anti-inflammatory drug that has anti-inflammatory, analgesic and antipyretic effects associated with non-selective suppression of the activity of cyclooxygenase, which regulates the synthesis of prostaglandins.

Caffeine - causes dilation of the blood vessels of skeletal muscles, the heart,the kidneys; increases mental and physical performance, helps eliminate fatigue and drowsiness; increases the permeability of histohematogenous barriers and increases the bioavailability of non-narcotic analgesics, thereby enhancing the therapeutic effect. It has a tonic effect on the vessels of the brain.

Drotaverine - has myotropic antispasmodic effect due to inhibition of phosphodiesterase IV, acts on smooth muscles in the gastrointestinal tract, biliary tract, urinary and vascular systems.

Pheniramine is a blocker of H1-histamine receptors. It has antispasmodic and mild sedative effect, reduces the phenomenon of exudation, and also enhances the analgesic effect of paracetamol and naproxen.

The drug is contraindicated during pregnancy and lactation (breastfeeding).

From the side of blood-forming organs: thrombocytopenia, leukopenia, agranulocytosis, anemia, methemoglobinemia;

In some cases, the concentration of attention and speed of psychomotor reactions may decrease, therefore, during the period of treatment, the patient must be careful when driving vehicles and engaging in other potentially hazardous activities that require increased concentration and psychomotor speed.

It is necessary to avoid the simultaneous use of the drug Pentalgin with other agents containing paracetamol and / or NSAIDs, as well as with means to alleviate the symptoms of cold, flu and nasal congestion.

When using the drug Pentalgin for more than 5–7 days, it is necessary to monitor the indicators of peripheral blood and the functional state of the liver. Paracetamol distorts the results of laboratory studies of glucose and uric acid in plasma. If it is necessary to determine the 17-ketosteroids, Pentalgin should be discontinued 48 hours before the study. Note that naproxen increases bleeding time.

The effect of caffeine on the central nervous system depends on the type of nervous system and can manifest itself as excitation and inhibition of higher nervous activity. During the treatment period, the patient should avoid drinking alcohol.

With the simultaneous use of drugs that have a depressant effect on the central nervous system (including sedatives and tranquilizers), the intensity of the sedative effect and the inhibitory effect on the respiratory center are likely to increase. Enhances the effect of ethanol on the psychomotor response.

Metamizole reduces the concentration of cyclosporine. Metamizole sodium, displacing oral hypoglycemic drugs, indirect anticoagulants, glucocorticosteroids and Indomethacin from the connection with the protein, increases their activity.

Tricyclic antidepressants, oral contraceptives, Allopurinol violate the metabolism of metamizole in the liver and increase its toxicity.

The simultaneous use of the drug with other non-narcotic analgesics can lead to increased toxic effects.

Barbiturates, phenylbutazone and other inducers of microsomal liver enzymes weaken the effect of metamizol.

Treatment: gastric lavage followed by ingestion of Activated carbon . Acetylcysteine ​​is a specific antidote for paracetamol poisoning. The introduction of acetylcysteine ​​is important within 8 hours after taking paracetamol. In case of gastrointestinal bleeding, it is necessary to administer antacids and gastric lavage with ice-cold 0.9% sodium chloride solution; maintaining lung ventilation and oxygenation; with epileptic seizures - in / in the introduction of diazepam; maintaining fluid and salt balance.