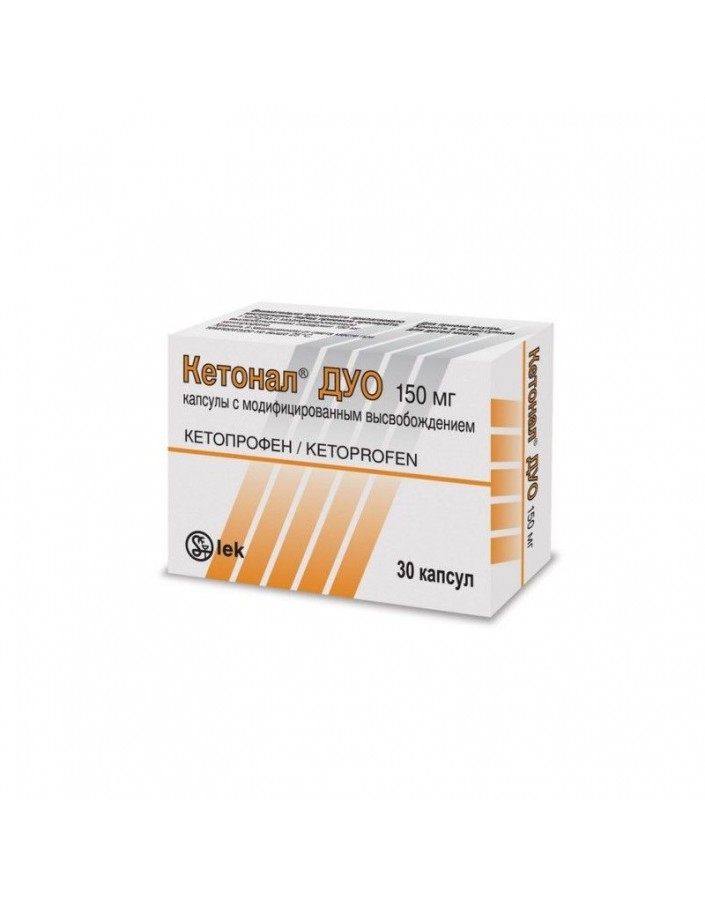 inflammatory and degenerative diseases of the musculoskeletal system:

Inside Standard dose of Ketonal ® Duo for adults and children over 15 makes 150 mg / days. Capsules should be taken with or after meals with water or milk (the volume of the liquid should be at least 100 ml).

The maximum dose of Ketoprofen is 200 mg / day.

- peptic ulcer of the stomach and duodenum in the acute phase;

- hemophilia and other bleeding disorders;

- gastrointestinal, cerebrovascular and other bleeding (or suspected bleeding);

- hypersensitivity to ketoprofen or other components of the drug, as well as salicylates or other NSAIDs.

The use of ketoprofen in the third trimester of pregnancy is contraindicated. In the first and second trimesters of pregnancy, prescribing is possible only if the intended benefit to the mother outweighs the potential risk to the fetus.

When taking the drug during lactation should decide on the termination of breastfeeding.

The drug is contraindicated in severe liver failure.

The drug is contraindicated in severe renal failure.

Contraindicated in children and adolescents up to 15 years.

With prolonged use of NSAIDs, it is necessary to monitor the state of the blood, as well as the function of the kidneys and liver, especially in elderly patients (over 65).

Care must be taken and more often to control blood pressure when using ketoprofen to treat patients with arterial hypertension, cardiovascular diseases that lead to fluid retention in the body.

Like other NSAIDs, ketoprofen can mask signs of infectious diseases.

Evidence of adverse effects of ketonal® Duo in the recommended doses on the ability to drive a car or work with mechanisms not. However, patients who notice non-standard effects when taking Ketonal® Duo, caution should be exercised when engaging in potentially hazardous activities that require increased concentration and psychomotor speed.

Treatment: in case of overdose, gastric lavage and the use of Activated carbon are indicated. Symptomatic therapy is performed. The effect of ketoprofen on the gastrointestinal tract can be reduced with the help of histamine N blockers.2-receptors, proton pump inhibitors and prostaglandins.

Ketoprofen can weaken the effect of diuretics and antihypertensive drugs, and enhance the effect of oral hypoglycemic and some anticonvulsant drugs (phenytoin).

Combined use with other NSAIDs, salicylates, GCS, ethanol increases the risk of adverse effects from the gastrointestinal tract.

The simultaneous appointment with anticoagulants, thrombolytics, antiplatelet agents increases the risk of bleeding.

At the same time taking NSAIDs with diuretics or ACE inhibitors increases the risk of impaired renal function.

The drug should be stored out of the reach of children, protected from light at a temperature not higher than 25 ° C.