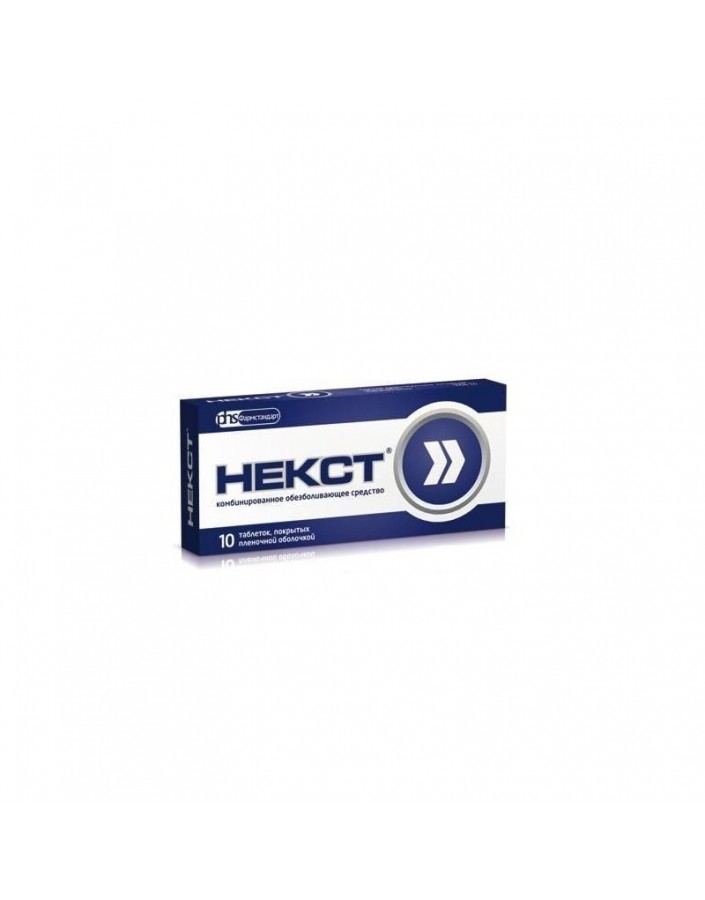 Next - a combined drug, has analgesic, anti-inflammatory and antipyretic effect.

Paracetamol - non-narcotic analgesic, has antipyretic and analgesic effect due to the blockade of cyclooxygenase in the central nervous system and the impact on the centers of pain and thermoregulation.

Ibuprofen - nonsteroidal anti-inflammatory agent, has an analgesic, anti-inflammatory and antipyretic effect associated with non-selective suppression of the activity of cyclooxygenase, which regulates the synthesis of prostaglandins.

The components of the drug affect both the central and peripheral mechanisms of pain syndrome formation. The directional, complementary effect of the two components has a rapid therapeutic effect and a pronounced analgesic effect.

Carefully: Chronic heart failure; viral hepatitis, alcoholic liver damage, hepatic and / or renal failure of moderate and mild severity, benign hyperbilirubinemia (Gilbert, Dubin-Johnson and Rotor syndrome), cirrhosis of the liver with portal hypertension, nephrotic syndrome; diabetes mellitus, peripheral artery disease, gastric ulcer and duodenal ulcer (in history); gastritis, enteritis, colitis; bronchial asthma, bronchospasm; elderly age; pregnancy (I and II trimesters - use is possible only if prescribed by a doctor in cases where the potential benefit outweighs the possible risk), lactation period (if you need to use the drug during breastfeeding, you should stop breastfeeding).

NEXT is taken orally after meals.

The simultaneous use of the drug with other drugs containing paracetamol and / or non-steroidal anti-inflammatory drugs should be avoided.

When using the drug for more than 5-7 days, monitor peripheral blood levels and the functional state of the liver.

Paracetamol distorts the results of laboratory studies of glucose and uric acid in plasma.

At the onset of symptoms of NSAID-gastropathy, careful monitoring is shown, including esophagogastroduodenoscopy, blood analysis with hemoglobin and hematocrit, and fecal occult blood analysis.

While taking the drug, patients should refrain from all types of activities that require increased attention, quick mental and motor responses.

During treatment, the intake of alcohol-containing beverages is not recommended.

Inductors of microsomal oxidation in the liver (phenytoin, ethanol, barbiturates, flumecinol, rifampicin, phenylbutazone, tricyclic antidepressants) increase the production of hydroxylated active metabolites, which makes it possible for severe intoxication to develop with an overdose.

Inhibitors of microsomal oxidation (including cimetidine) reduce the risk of hepatotoxic action.

The combination of ibuprofen with ethanol, glucocorticosteroids increases the risk of erosive and ulcerative lesions of the gastrointestinal tract.

The simultaneous use of paracetamol with ethanol increases the risk of acute pancreatitis.

Paracetamol and ibuprofen enhance the effect of indirect anticoagulants and reduce the effectiveness of uricosuric drugs.

Ibuprofen reduces the hypotensive activity of vasodilators, natriuretic and diuretic - Furosemide and hydrochlorothiazide.

Antacids and colestyramine reduce the absorption of ibuprofen.

Ibuprofen enhances the effect of oral hypoglycemic agents and insulin .

With simultaneous appointment with acetylsalicylic acid ibuprofen reduces its anti-inflammatory and antiplatelet effect.

Keep out of the reach of children at a temperature not exceeding 25aboutWITH.