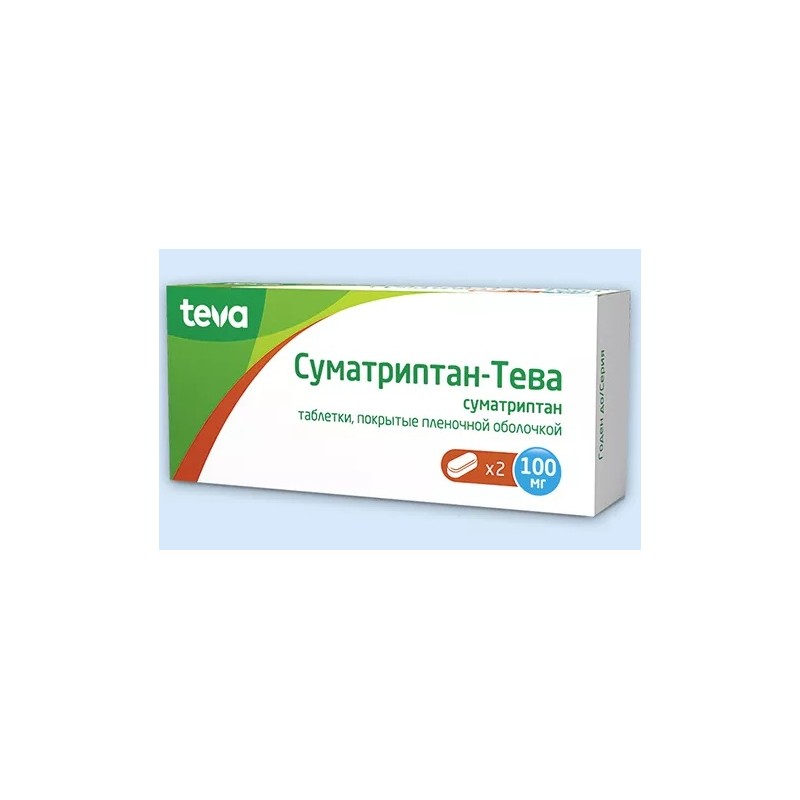 In the blister 2 tablets. In packing 1 blister.

Sumatriptan is an anti-migraine drug. A specific and selective agonist of 5-HT1-serotonin receptors, localized predominantly in the blood vessels of the brain, and does not affect other subtypes of 5-HT-serotonin receptors (5-HT 2-7). Causes vasoconstriction of the carotid arterial bed, which supply blood to extracranial and intracranial tissues (dilation of the meninges and / or edema is the main mechanism of migraine development in humans), without having a significant effect on cerebral blood flow. Inhibits the activity of receptors of the endings of the afferent fibers of the trigeminal nerve in the dura mater (as a result, the release of sensory neuropeptides decreases). Eliminates nausea and photophobia associated with migraine attack.
In 50-70% of cases, it quickly eliminates a seizure when taken orally at a dose of 25-100 mg. Within 24 hours in 1/3 of cases, a relapse may develop, requiring repeated use. Start of action - 30 min. After ingestion in a dose of 100 mg.

Migraine (relief of attacks, with or without aura).

- Hypersensitivity.
- Hemiplegic, basilar or ophthalmoplegic forms of migraine.
- Ischemic heart disease (CHD) and suspicion of it.
- Angina pectoris (including Prinzmetal angina pectoris).
- Myocardial infarction (including history).
- Arterial hypertension (uncontrolled).
- Occlusive peripheral arterial disease.
- Stroke or transient violation of cerebral circulation (including in history).
- Hepatic or renal failure.
Caution should be used:
- Epilepsy (including any condition with a reduced epileptic threshold).
- Hypertension (controlled).
Pregnancy and lactation.
- Children's and teenage age up to 18 years.
- The elderly are over 65 years old.
- Simultaneous administration of medicines containing ergotamine and its derivatives, as well as MAO inhibitors, AND a period of up to 14 days after their withdrawal.

It is used with caution during pregnancy and during breastfeeding.

Inside Begin treatment as soon as possible after the onset of a migraine attack (although the drug is equally effective at any stage of the attack).
For relief of acute migraine attacks: adults 50 mg, if necessary - 100 mg (the pill should be swallowed whole with water). If the symptoms of migraine do not disappear and do not decrease after the administration of the double first dose, then it is not reappointed for stopping the ongoing attack.
For relief of subsequent attacks (with the reduction or disappearance of symptoms, and then resumption): take the second dose in the next 24 hours, provided that the interval between intake is at least 2 hours. During any 24 h period, the maximum dose is 300 mg / day.

It is not intended for the prevention of migraine (introduction during a migraine aura before the onset of other symptoms may not prevent the development of a headache). If there is no effect on the first dose, the diagnosis should be clarified. It must be borne in mind that patients with migraine, there is a risk of stroke or transient disorders of cerebral circulation. If prescribed during lactation, it is not recommended to breastfeed the baby for 24 hours after taking sumatriptan. In patients with hypersensitivity to sulfonamides with the introduction of sumatriptan there is an increased risk of allergic reactions (from skin manifestations to anaphylactic shock).
Patients at risk from the cardiovascular system do not begin therapy without prior examination (women in menopausal women, men over 40, people with risk factors for coronary heart disease).
Before the appointment of sumatriptan to patients with newly diagnosed or atypically occurring migraine, other potentially dangerous neurological diseases should be excluded.
Experience with sumatriptan in patients over 65 years of age is limited (there is no significant difference in pharmacokinetics compared with younger patients).
Application when driving motor transport: During the period of treatment, care must be taken when driving motor vehicles and engaging in other potential activities that require increased concentration and psychomotor speed.

With the simultaneous administration of ergotamine and ergotamine-containing drugs, prolonged vasospasm is possible (the interval between their intake should be at least 24 h). An interaction between sumatriptan and MAO inhibitors is possible (a decrease in the intensity of the metabolism of sumatriptan, an increase in its concentration). With the simultaneous use of sumatriptan and drugs from the group of selective serotonin reuptake inhibitors, the development of weakness, hyperreflexia and impaired coordination of movements is possible.

Symptoms: when administered to 400 mg is not observed any other adverse reactions, in addition to those listed above.
Treatment: observation of the patient for 10 hours, symptomatic therapy.